During a speech delivered at the AgroParisTech graduation ceremony on May 10, eight students said they refused to perform “destructive jobs” and called on their comrades to join the ecological struggles and to work with their hands.

The large bright screen announced the end-of-year speech of a young graduate. But at the podium, they arrived as eight instead of one. In turn, they described the role that their training and their profession play in the ecological and social disaster and called on their colleagues to “take another path”. 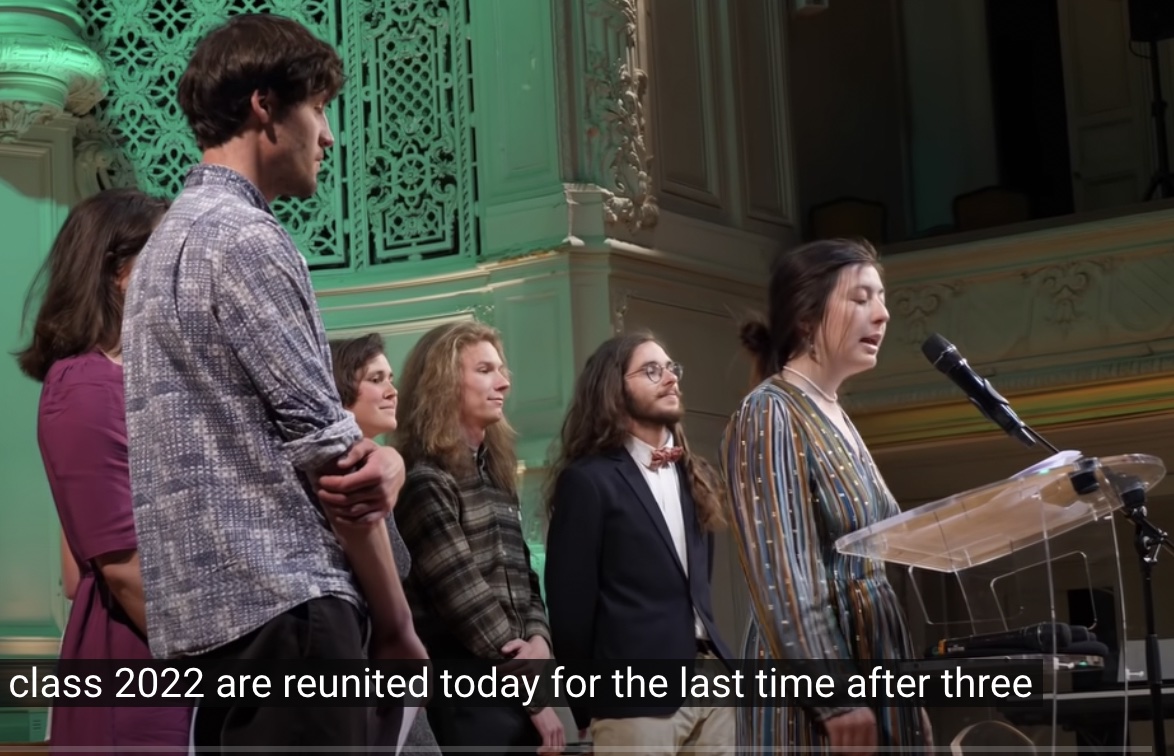 The 2022 graduates are now meeting for the last time after three or four years at AgroParisTech. Many of us do not want to pretend to be proud and deserving of obtaining this diploma at the end of a training which globally pushes to participate in the social and ecological devastations in progress.

We do not see ourselves as “the talents of a sustainable planet”.

We do not see ecological and social devastation as “issues” or “challenges” to which we should find solutions as engineers.

We do not believe that we need “all agricultures”. Rather, we see that agribusiness is waging a war on the living and on the peasantry everywhere on Earth.

We do not see science and technology as neutral and apolitical.

We believe that technological innovation or start-ups will save nothing but capitalism.

We do not believe in “sustainable development”, nor in “green growth”, nor in “ecological transition”, an expression which implies that society can become sustainable without getting rid of the dominant social order. .

AgroParisTech trains hundreds of students every year to work for the industry in various ways: tampering with plants in the lab for multinationals that reinforce the enslavement of farmers; designing prepared meals and then chemotherapy to treat the diseases caused; inventing good conscience labels to allow managers to believe themselves heroic by eating better than others; developing “green energies” which make it possible to accelerate the digitization of society while polluting and exploiting on the other side of the world; producing CSR [corporate social responsibility] reports that are all the longer and more delirious because the crimes they hide are scandalous; or even counting frogs and butterflies so that concrete workers can make them disappear legally.

“We speak to those who doubt”

These jobs are destructive, and to choose them is to harm… by serving the interests of the few.

Yet these are the opportunities that were presented to us throughout our studies at AgroParisTech. On the other hand, we have never been told about graduates who consider that these professions are more part of the problems than of the solutions and who have chosen to desert.

We speak to those who doubt. Whether this doubt is daily — or fleeting.

To you, who accepted a job because “you need a first experience”.

To you, whose loved ones work to perpetuate the system, and who feel the weight of their gaze on your professional choices.

To you, who, seated behind a desk, look out the window dreaming of space and freedom.

To you who take the TGV every weekend in search of a well-being never found.

To you who feel uneasiness rising without being able to name it, who often find that this world is crazy, who want to do something but don’t really know what, or who hoped to “change things from the inside” and don’t believe it already.

We too have doubted, and sometimes we still doubt.

And we refuse to serve this system, we have decided to look for other ways, to build our own paths.

How did it start?

We met people who were struggling, and we followed them on their battlefields. They made us see the other side of the projects that we could have carried out as engineers. I think of Christina and Emmanuel who see the concrete flowing on their land on the Saclay plateau. I think of this dry hole, a derisory compensation for a pond full of newts. Or to Nico who sees from his tower block the popular gardens of his childhood razed for the construction of an eco-district.

Here and there, we have met people who are experimenting with other ways of life, who are reclaiming knowledge and know-how so as to no longer depend on the monopolies of polluting industries.

People who understand their territory to live from it without exhausting it. Who actively fight harmful projects. Who practice a popular, decolonial and feminist ecology on a daily basis. Who find the time to live well and take care of each other. All these encounters have inspired us to imagine our own paths.

… I have been living for two years at the zad of Notre-Dame-des-Landes where I do collective and subsistence farming, among other things.

… I am in the process of setting up in beekeeping in the Dauphiné.

… I joined the Les Uprisings of the Earth movement to fight against the grabbing of agricultural land and its concrete everywhere in France.

… I live in the mountains, I have a seasonal job and I start drawing.

… We settle in a collective in the Tarn on a Terre de Liens farm with a peasant baker, brewers and arboriculturists.

… I am committed against nuclear power near Bure.

… I train today to settle tomorrow and work with my hands.

We consider these ways of living to be more than necessary and we know that they will make us stronger and happier.

Worried about stepping aside because it wouldn’t “do well” on your resume?

To distance yourself from your family and your network?

To deprive you of the recognition that a career as an agricultural engineer would bring you?

But what life do we want? A cynical boss? A salary that allows you to fly? A thirty-year loan for a pavilion? Not even five weeks a year to breathe in an “unusual lodge”? An electric SUV, a Fairphone and a Biocoop loyalty card?

“Let’s not wait for the 12ᵉ IPCC report”

Let’s not waste our time. But above all, let’s not lose this energy that is boiling somewhere in us.

Let’s not give up when we are stuck with financial obligations.

Let’s not wait for our kids to ask us for money to go shopping in the Metaverse because we ran out of time to make them dream of something else.

Let’s not wait to be incapable of anything other than a pseudo-reconversion in the same job, but repainted in green.

Let’s not wait for the 12th IPCC report, which will demonstrate that states and multinationals have never done anything but make the problems worse, and which will place its last hopes in popular uprisings and revolts.

You can fork now.

Start training as a farmer-baker. Leave for a few months of woofing. Participate in a construction site on a zad or elsewhere. Engage with those in need. Get involved in a self-managed bike workshop or join a weekend of struggle with the Earth Uprisings.

It’s up to you to find your ways to take another path.