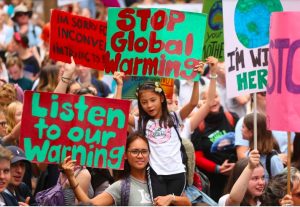 Here are excerpts from the CPNN Bulletin of April, 2019.

Millions of students went on strike from school on March 15 to pressure their governments to address seriously the problem of global warming. Photos from that day on CPNN show their demonstrations around the world: in the UK, Australia, Philippines, Sweden, Italy, Uganda, Belgium, USA, Canada, Portugal, Ukraine, Spain, Chile, Nigeria, France and Bangladesh.

The movement has been inspired by the actions of a girl in Sweden, Greta Thunberg, who sat last year by herself outside the Swedish parliament to demand that they take action. Since then Greta has spoken out in many venus, including the meeting of the world’s richest bankers and executives in Davos, Switzerland. Her words at Davos struck a chord, especially among young people around the world: “Act As If Our House Is on Fire. Because It Is.” She has even been nominated for the Nobel Peace Prize. If Thunberg won, the 16-year-old would be the youngest winner ever and the second after 2007 co-winners former U.S. Vice President Al Gore and the Intergovernmental Panel on Climate Change to be honored for work on climate change.

UN Secretary-General Antonio Gutteres has praised the youth movement, saying that ““These schoolchildren have grasped something that seems to elude many of their elders”, he said, adding that “we are in a race for our lives, and we are losing. The window of opportunity is closing; we no longer have the luxury of time, and climate delay is almost as dangerous as climate denial.” The Secretary-General acknowledged that his older generation “has failed to respond properly to the dramatic challenge of climate change. This is deeply felt by young people. No wonder they are angry.”

Representing CPNN, I had the chance to go to the march and demonstration of school students in New York against climate change on Friday, March 15. There were a series of demonstrations ending up with a big enthusisastic crowd at the Museum of Natural History. The average age was under 20. I’d have to back to the 60’s, 70’s and 80’s to remember big demonstrations with majority youth. Are we seeing the dawn of a global youth movement?

Here are the CPNN articles on the question
Are we seeing the dawn of a global youth movement?

The Boric effect on Chilean youth

‘We Refuse to Go On Like This’: US Students Walk Out to Demand Gun Control

Australia: On our “frightening” future: how this election shows young people are taking back their voice

Fridays for Future: Who we are

The best images from school strikes around the world

The kids got it right: Climate Change, pollution and the system

Fridays for the Future: 25000 demonstrate in Berlin with Greta Thunberg

Kids on strike for the climate in New York

Spanish youth rebel against climate change and begin to strike: “Friday for the future”