An 18-year-old environmental campaigner from the United States has told UN News how she wants to “turn apathetic people into climate activists”. Sophia Kianni, whose family originally comes from Iran, is one of seven young people from across the world who have been selected to participate in the UN Secretary-General’s Youth Advisory Group on Climate Change. The group which was launched at the end of the July aims to engage young people in “an open and transparent dialogue” about climate issues. 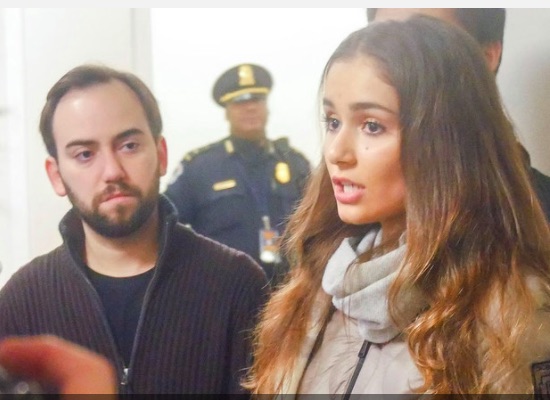 Sophia Kianni is an 18-year-old climate and environmental activist from the United States. Photo by Joe Hobbs.

“I first became interested in the effects of climate change as an Iranian-American when I visited my relatives in Iran as a 12 or 13-year old. I noticed how polluted the sky was; I couldn’t see the stars at night. I realized this was a symptom of the climate crisis that was particularly bad in the Middle East, where temperatures are rising at a rate of more than twice the global average.

I talked to my relatives about the pollution and was startled they knew pretty much nothing about climate change even though they were adults and so it became my pet passion to educate them about the climate crisis.

I understood that Iran as a country is facing many challenges and recognized that climate change was maybe not at the forefront of people’s minds, but I still thought that my Iranian family deserved to know about the climate crisis.

When I told them what that actually meant, and that I was worried about my future, they were pretty shocked. And following those conversations they have tried to be more conscientious about the impact of their daily activities, for example driving less and switching off lights. These are small steps to minimize their carbon footprint but if everyone took these steps it would make a huge difference.

I also realized there was no information in their language Farsi, so decided to translate information for them from English sources with the help of my mum.

This experience with my relatives in Iran inspired me to establish my international nonprofit organization, Climate Cardinals, which has just launched, and which has over 5,000 volunteers translating climate information into more than 100 languages and dialects, including everything from Spanish to Haitian Creole, or Farsi to an Indonesian dialect.

These volunteers have an average age of 16-years-old. We started by translating 3,000 pages of a sustainable fashion glossary as well as a forest climate glossary for which we are now awaiting feedback.

So, a small one-person show of educating my family has turned into a gigantic project with over 5,000 people involved and now I am helping to educate thousands and thousands of people. I am very excited about our partnership with Radio Javan (Persian language internet radio station based in the United States) which has a reach of 11 million people on social media. So, I moved from educating 11 family members to 11 million people and it made me realise that small actions are the gateway for gigantic visions to develop. Everyone has a power to affect change in their own way.

Most young people I talk to believe the climate crisis is a big deal but their passion to change depends on how much information they have; the more we talk, the more we raise awareness, the more people understand how pressing this is. For me, this is about turning apathetic people into climate activists.

Our group has been meeting online and we are due to talk the UN Secretary-General in the next couple of weeks. We will be giving him feedback on his climate strategy and how the UN can better engage young people in the process. Personally, I would like to tell him that we need climate information in more than just the UN languages.

The UN should also be engaging even younger people. At 18, I am the youngest in the group, but there are also many activists who are between the ages of 14 and 17, and their voices are very important. If more younger people are engaged in the climate discussion it is more likely they will become climate activists.

The Individual v the political process

Ultimately, I am optimistic that we can reverse climate change, but a lot of this will fall into the political process as no matter how much I or other individuals do on a personal level, it is really up to the government to pass comprehensive climate legislation. I really hope people become more engaged in the political process and educate themselves on which candidates support climate change policies.

The younger generation is more progressive so I am hopeful in the future we will be able to elect more politicians who care about climate change issues, and who will pass aggressive legislation.”