An article from Scheerpost

Presented on May 10th, 2022, by Women Transforming Our Nuclear Legacy, a coalition of the women leaders and activists from around the world call for peace in Ukraine and and an end to the threat of nuclear war. 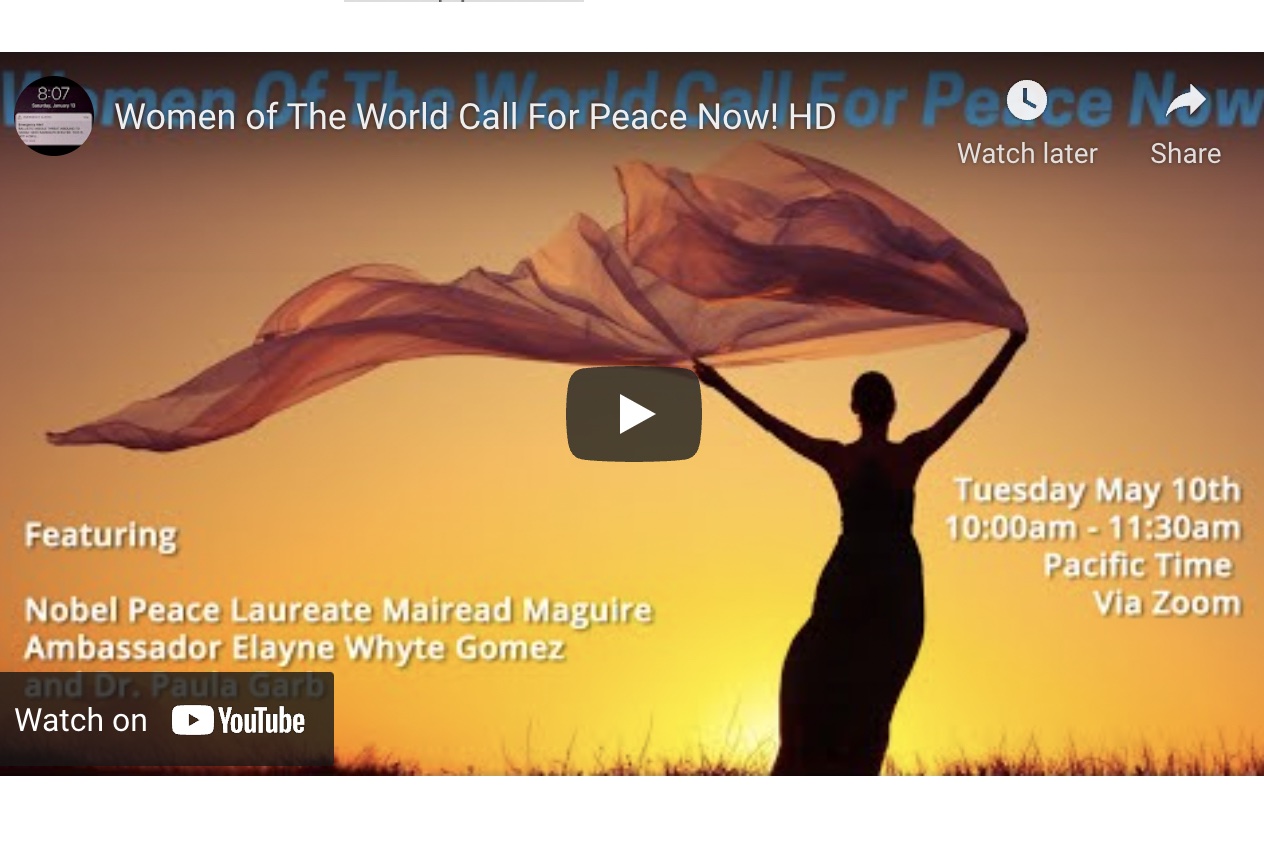 Video of their videoconference

Born out of an American-Russian Women’s Dialogue and Peacebuilding Initiative founded just over a year ago, the group started with the goal of improving US-Russia relations, reducing tensions, averting a nuclear war, and working together for the disarmament and elimination of nuclear weapons.

Can the peace movement help stop the Ukraine war?

Mairead Corrigan Maguire is a Nobel Peace Laureate and Co-founder of Peace People, Northern Ireland. Mairead was the aunt of three Maguire children who died as a result of being hit by an Irish Republican Army getaway car after its driver was shot by a British soldier. She responded to the violence facing her family and community by organizing massive peace demonstrations appealing for an end to the bloodshed and a nonviolent solution to the conflict. Mairead was awarded the l976 Nobel Peace Prize for her courageous efforts in co-founding a movement to help bring about peace and end the violence arising out of the ethnic political conflict in Northern Ireland. Since receiving the award, she has dedicated her life to promoting peace and disarmament, both in Northern Ireland and around the world.

Dr. Paula Garb is a Senior Fellow at the Center for Peacemaking Practice at George Mason University. For the past twenty-eight years, Dr. Garb has facilitated citizen dialogues and taught peaceful problem-solving skills in conflict zones of the South Caucasus and to gang intervention workers in Southern California. She also taught mediation and conflict resolution at the University of California, Irvine for twenty-five years.  Dr. Garb serves on the board of UCI’s Center for Citizen Peacebuilding which she co-founded and co-directed for twenty years. She has also published numerous books and journal articles on peacebuilding.

Ambassador Elayne Whyte Gomez is a diplomat and academic who previously served as the Ambassador from Costa Rica to the United Nations in Geneva. In 2017, Ambassador Whyte presided over the UN Conference that negotiated and adopted the Treaty on the Prohibition of Nuclear Weapons.  Facing extraordinary time pressure, and, at times, contentious debate, Ambassador Whyte facilitated the adoption of this landmark agreement by a vote of 122 nations in favor, one against, and one abstention. Among her many accomplishments, she is also the first woman and the youngest person ever to serve as vice minister of Foreign Affairs in Costa Rica.

Cynthia Lazaroff is the Senior Creative Producer for US-Russia Relations: The Quest for Stability, a seven-part multimedia documentary produced with philanthropic support from the Carnegie Corporation of New York. Over the past forty years, Cynthia has been engaged in Track II and 1.5 diplomacy with Russia and the former Soviet Union. Cynthia is the Founder & Director of Women Transforming Our Nuclear Legacy  & NuclearWakeUpCall.Earth.