Women and girls are powerful leaders and change-makers for climate adaptation and mitigation and must be included in the design and implementation of climate action. Without their leadership, knowledge and participation in climate responses today, it is unlikely that solutions for a sustainable planet and gender-equal world tomorrow will be realized.

Across the Europe and Central Asia, women and girls are advancing feminist climate justice and leading the charge on climate change adaptation, mitigation and response. They are mobilizing local, national, regional and global climate movements and harnessing the transformative power of feminist leadership to face the unprecedented challenges of our times. 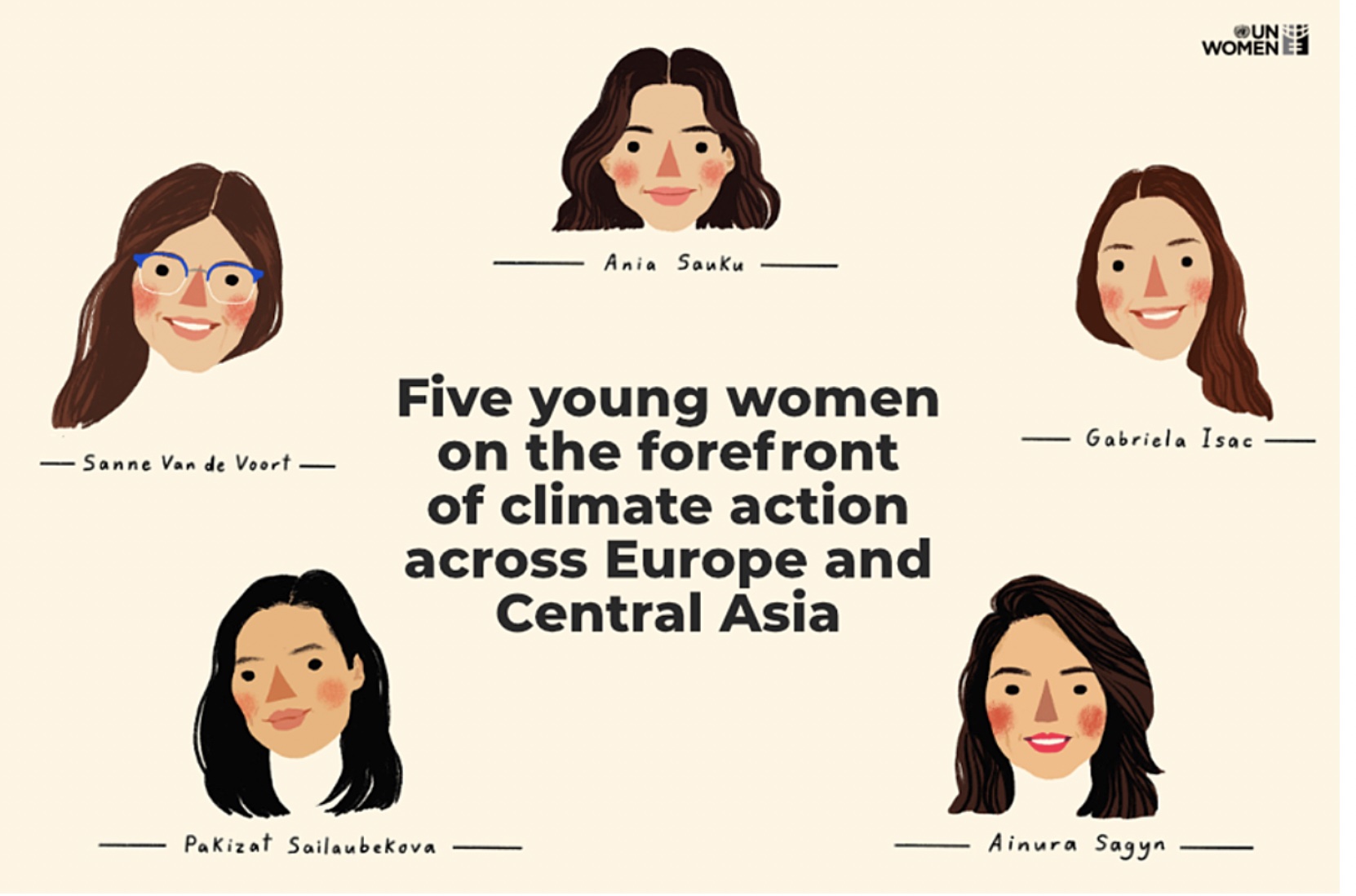 Ainura Sagyn, 33, is an ecofeminist, computer software engineer, and CEO of Tazar  [Become Greener], a startup mobile application that connects waste producers with recyclers and educates consumers about waste management in Kyrgyzstan. She actively promotes women’s rights, gender equality and environmental issues through her technological activism.

Some 65 per cent of Tazar app users are unemployed women with children who sell sorted recycled waste to earn points they can exchange for prizes such as deposit money from a bank or cosmetics, all from partners who are mostly women entrepreneurs. They have collected more than 10 tonnes of waste since the end of 2020. Sagyn and her partner Aimeerim Tursalieva also launched a Tazar Bazaar platform that sells eco-friendly products made by women entrepreneurs, which helps support local businesses, women entrepreneurs and promotes eco-consumption.

“Women, in particular, are disproportionately affected by climate change due to their lack of access to natural resources management, limited mobility in rural areas and by being excluded from decision-making processes,” says Sagyn, who aspires to extend her startup to promote environmentalism in other Central Asian countries.

Gabriela Isac, 29, is an environmental activist, co-founder of the Seed It Forward  volunteer agroforestry initiative and a project coordinator at the EcoVisio  grass-roots ecological non-profit in Moldova.

With the Seed It Forward team, she organizes tree-planting events, consults civil society organizations, local public authorities, schools and the general public on environmental issues, and educates them through informational materials on trees, composting and permaculture. They have planted over 50,000 trees and bushes, while their recent environmental campaign reached more than 1.5 million people online.

“Moldova is quite vulnerable to climate change. Though the effects are not as disastrous yet as in other parts of the world, climate change increases an already existing burden on women. Women often work in rural areas and take the least-paid day jobs in agriculture. Women’s welfare is directly affected by the harvest, which in the low-tech agricultural system of Moldova highly depends on climate,” says Isac.

Ania Sauku, 19, is an active voice for gender equality, climate action and youth empowerment in Albania. She is one of the incumbent Albanian Youth Delegates to the United Nations, where she advocates for climate issues and sustainable development and shares the perspective of youth in her country.
She raises awareness on climate change and feminism and how they are inextricable from one another. Sauku believes that for many people in Albania, climate change is still not an issue, and that gender equality and climate are not related. Together with her team, she organizes movie nights on environment, protests and marches for climate justice, and other educational initiatives to raise awareness about climate change and intersectional feminism.
“Climate crisis does not affect us all in the same way and often women are the most vulnerable to this crisis, especially women from marginalized communities such as women of ethnic minorities, women of colour, women with disabilities, queer women, women living in poverty, and other women and girls at the intersection of multiple systems of oppression,” says Sauku.

Pakizat Sailaubekova, 29, is an environmentalist, project manager at Greenup.kz public fund and a co-founder of the Recycle BIRGE  [Recycle Together] ecological movement in Kazakhstan. She won the “>Tereshkevich Youth Environmental Award  for her eco-activism and a 3.2.1. Start!  eco-project grant.

She organizes public and corporate clean ups, climate-related events, conducts eco-consulting and gives various educational lectures on household waste and living an eco-friendly life. Together with colleagues, Sailaubekova has organized 43 clean ups with the participation of over 1,700 people. They have also collected and transferred more than 4,000 kg of recyclable materials for processing and implemented 14 large-scale environmental projects.

“The role of women in preserving nature is enormous,” she says, adding that 95 per cent of the eco-volunteers and the participants in their environmental campaigns are women and girls. “Women are at the forefront of solving many environmental problems, each at their own level. Our organization is also founded solely by women.”

Sanne Van de Voort, 27, is Advocacy Officer for Women Engage for a Common Future  (an international ecofeminist network), and an NGO representative on the Dutch Delegation to this year’s Commission on the Status of Women (CSW).

She believes that feminist climate justice recognizes the intersectionality of climate and environmental issues and how each individual is affected differently by climate change and can lend their unique experiences to finding solutions. As an Advocacy Officer, she works to ensure that Dutch and international decisions taken on climate and environmental issues reflect the needs, perspectives and solutions of women and feminists across the world, especially from the Global South. In her new role as a Dutch NGO representative to CSW, she contributes to preparations and priority-setting in the Dutch Government’s CSW delegation alongside other Dutch civil society organizations.

“We need changes that start putting people and planet over profit,” says Van de Voort. “A system that puts equality, sustainability and justice at the centre, instead of the exploitation of natural resources at the expense of biodiversity and a healthy environment.”