A huge number of Russian citizens are against the Russian invasion of Ukraine. Many express their position through open letters and appeals or simply publications on social media. The Yabloko party, the majority of opposition politicians and activists, many municipal deputies across the country, and even several deputies of the State Duma and the Federation Council have publicly condemned the war. More than 1,100,000 people have subscribed under the anti-war petition written by a human rights activist Lev Ponomarev. Representatives of many professional communities — doctors, IT-specialists, teachers, designers, scientists, journalists, philanthropists, and various cultural workers — have signed collective open letters. In interviews and social networks a large number of famous Russians: nationally beloved musicians, internationally recognized filmmakers, TV hosts, actors, sportspeople, and businesspeople speak out against the war. Various independent media outlets have published statements against the war, and several print media outlets have come out with special covers. The list of the people and the organizations which publicly oppose the war grows every day. 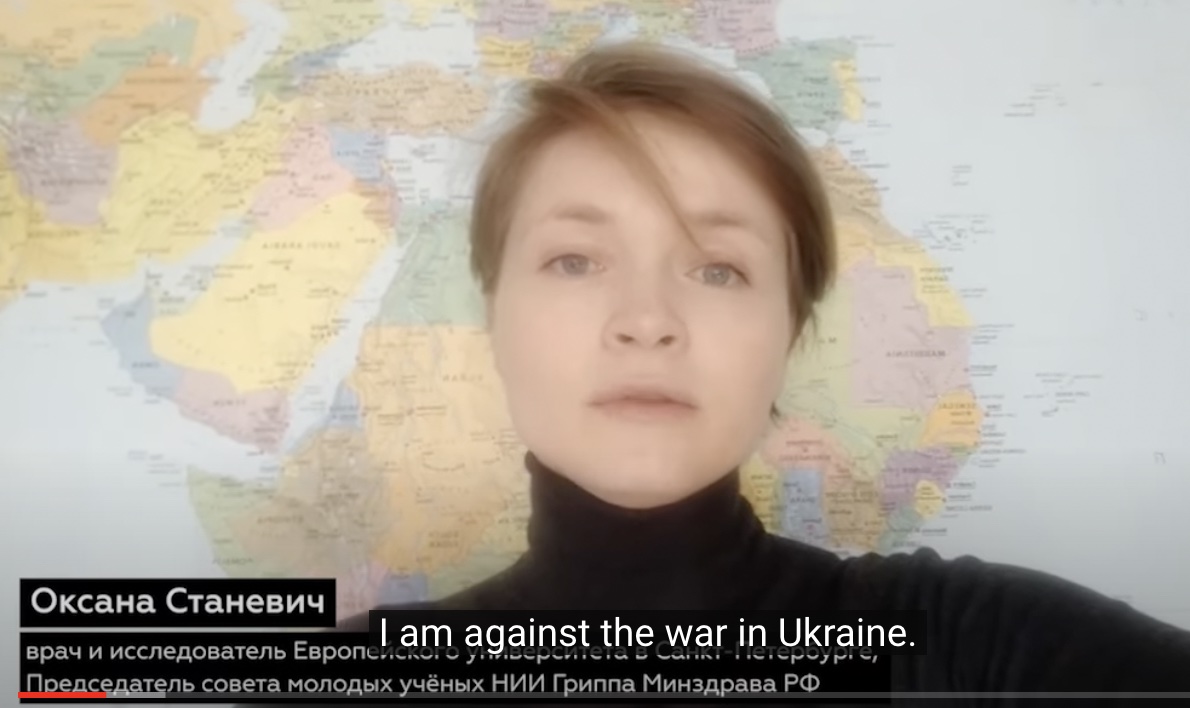 Video statement from young scientists against the war with Ukraine

This list is constantly being updated. If you want to help us update it with new data, write an email to stopwarua22@gmail.com.

(Editor’s note: Sources marked with an asterisk are no longer available as of March 13. In some of these cases I have been able to find other sources still available – put in parenthesis. For those in the left column blocked after March 13, I have provided backup versions.)

Representatives of many professions have published collective open letters to Vladimir Putin or Russian citizens condemning the war in Ukraine:

The war that Russia has launched against Ukraine is a disgrace. It is our shame, but, unfortunately, the responsibility for it will fall on our children, the generation of very young and even unborn Russians. We do not want our children to live in an aggressor country, to be ashamed that their army had attacked a neighboring independent state. We call upon all citizens of Russia to say ‘no’ to this war


Pain, anger, and shame — these are the three words that reflect how we feel about what is happening. <…> Ever since the Cuban Missile Crisis the world has never been so close to a global catastrophe. We, journalists of independent Russian media outlets, declare that we are against the massacre waged by the Russian authorities. We promise to report honestly about what is happening as long as we have the opportunity to do so

We took an oath to help all people, regardless of their nationality, religion or political views. But right now, our help is not enough. The fighting will take so many lives and cripple so many lives that we will not be able to help in all our efforts. Cries of pain and calls to mothers are all in the same language


Animation, and all art in general, has always been imbued with an anti-war spirit. We believe that today’s military actions are directed not just against our Ukrainian friends and colleagues but against all people, humanity, and Human in general


We, the priests and deacons of the Russian Orthodox Church, each on his own behalf, appeal to all on whom the fratricidal war in Ukraine depends for reconciliation and an immediate cease-fire. We send this appeal after the Last Judgment Sunday and in anticipation of the Forgiveness Sunday

Statements of celebrities and organizations

Many well-known Russians have appealed to the citizens and spoken out against the war with Ukraine through social networks and interviews. Among them are opposition politicians, activists and human rights activists

What is happening right now is pure madness. The people who started this war are insane. They are a disgrace to Russia — Boris Grebenshchikov, musician

I was sure that war was impossible. I really feel that Ukrainians are our family and our brothers, between whom war is impossible. I have been reading the assurances of this made by the current government with my own eyes. <…> I wish everyone to live to see the time when Russia will officially list and acknowledge the crimes of the current government — Vladi Kasta), musician

I’m ashamed I was born on this day — Alexander Gudkov, showman

Filmmakers and other cinematographers

Other culture workers and celebrities

Today we all met early in the newsroom. We are in grief. Our country, by the order of President Putin, has started a war with Ukraine. <…> We will publish this issue of Novaya Gazeta in two languages, Ukrainian and Russian. Because we do not recognize Ukraine as an enemy, and Ukrainian language as the language of the enemy. And we will never recognize it this way. And one last thing. Only the anti-war movement of Russians can save life on this planet

Founders of the Immortal Regiment movement, Igor Dmitriev, Sergey Lapenkov, and Sergey Kolotovkin, spoke out against the war with Ukraine

The problem is that few people think that the great-grandchildren of those who fought back then who we call The Immortal Regiment today) are thrown into this war, on one side or the other. I think our great-grandfathers would probably curse us for what has happened — Sergey Lapenkov

On January 28th, Colonel General Leonid Ivashov, Chairman of the ‘Assembly of the Russian Officers,’ had published an appeal to the President and the citizens of Russia entitled ‘The Eve of War,’ in which he condemned the possible recognition of the Donetsk and Luhansk republics and the escalation of the conflict in Ukraine

Former head of a popular Russian news aggregator Yandex.Novosti Lev Gershenzon has spoken out against the war and urged his colleagues not to suppress information about Russia’s war with Ukraine in the service’s news feed

Founder of a website The Question, former Yandex employee Tonya Samsonova has quit her job to protest Yandex.Novosti’s concealment of the information about the shelling of civilians by the Russian military

Due to the fact that Yandex does not display the information that Russian troops are shelling Ukrainian cities and killing civilians on the main page of Yandex, I ask that I be fired at my own request. I consider the company’s actions a crime and a complicity in the war and the murder — Tonya Samsonova

Statements of some government officials

Some government officials have spoken out against the war as well:

In social networks, the children of some Russian politicians and businessmen close to the government have spoken out against the war with Ukraine. Anti-war statements were published by the daughter of the Press Secretary for the President Dmitry Peskov Yelizaveta Peskova she soon deleted the statement), the daughter of businessman Roman Abramovich Sofia Abramovich, the daughter and granddaughter of former Russian President Boris Yeltsin Tatiana Yumasheva and Maria Yumasheva