Information sources about the Russian war against Ukraine are being blocked by both Russia and the West which makes the situation quite complicated. This is illustrated by many events today (March 17). 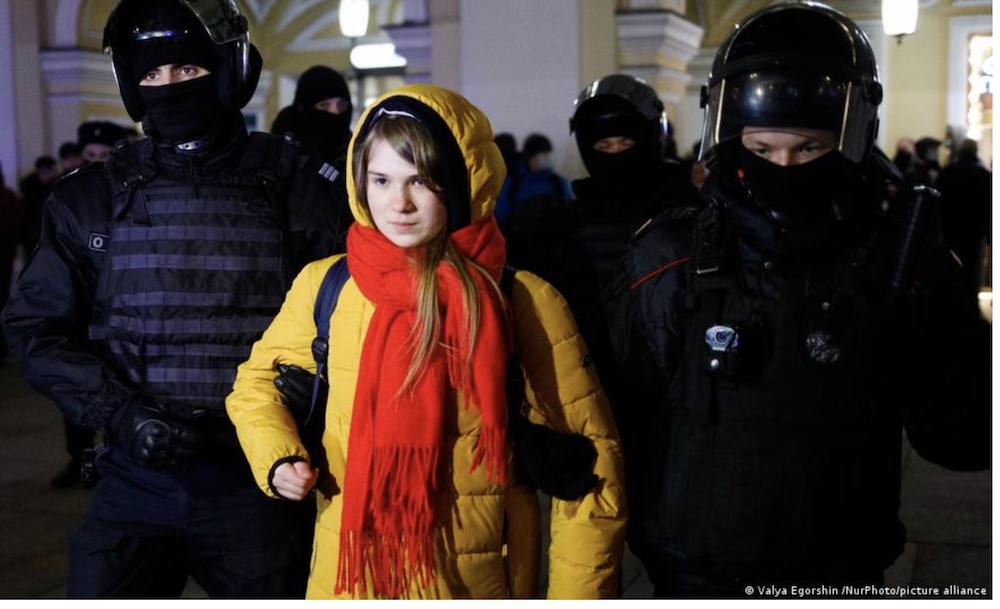 Photo of girl arrested for demonstrating in Russia against the war. Copyright Valya Egorshin/NurPhoto/picture alliance as published by Deutsche Welle

As of today, many of the sources are no longer available about opposition to the war in Russia as listed in the Google Doc of March 13. We may assume they have been blocked or withdrawn under threats by Russian authorities. We have been able to find alternative sources for 13 of them, including backup copies of sources that were blocked after March 13. The Statement of Russian peace supporters and the open letter of Russian cultural figures continue to be republished by CPNN but are no longer available from the source, Echo of Moscow, because the website has been blocked by the Russian authorities. Open letters from Russian scientists and from Russian mathematicians are republished in CPNN but no longer available from the source, TRV-Science, presumably withdrawn because of legal pressure.

An article published recently by CPNN describes how Russians are getting around censorship by using social networks, encrypted messaging and VPN servers.  For those of us not yet familiar with VPN, it stands for Virtual Private Networks. As described on the website of cybernews, while there are many ways that authorities can block VPNs, there are even more ways to bypass their blocking.

An article yesterday in Deutsche Welle describes how Russians are taking risks to express their opposition in the face of police action that is sometimes even ridiculous. A video went viral on social media last week, showing a woman being arrested by the Russian police for holding up a small piece of paper that reads “two words.” The phrase “two words” (“два слова” in Russian) seems to hint at the forbidden slogan “no to war” (or “нет войне” in Russian). And Russian police have arrested demonstrators who protest with blank signs. A video that receive millions of views on social media, showed a woman holding a blank sign among a group of people before police officers approached her and escorted her away from the crowd. In another case, the pilot on an internal Russian flight made the following announcement: “Ladies and gentlemen, here is your captain speaking. Welcome to Antalya. Thank you for flying with “Pobeda”. Also, from me personally: the war with Ukraine is a crime…”.

Two women in Canada have launched a initiative for people to telephone friends in Russia to tell them the news that is being blocked from their television reports. They are even furnished telephone numbers if someone can speak Russian and wants to call Russians whose telephone numbers have been randomly selected.

An event that reminds one of the Black Panthers who said they fought on the wrong side in Vietnam, CNN has published information from videos of interviews with Russian soldiers captured (or perhaps in some cases deserted?) in Ukraine and who go so far as to say they will return to Russia and struggle against Putin.

Finally, with regard to Russia, we recommend a very valuable analysis from the Financial Times that describes the small circle of Putin’s advisors that influence his information and decisions.

While the above information is concentrated on Russian censureship, we should not forget, as described in CPNN on January 18, that the details of Putin’s proposals for peace treaties with the West that could have prevented the war were suppressed by the Western media and only available after diligent research.

What we are seeing is really a case of cyber-warfare, as it may be said that the control of information becomes more and more an arm of the culture of war.