An article by Pauline Rouquette in France 24

Thousands of Russians have taken to the streets in protest against the invasion of Ukraine, with more than 6500 demonstrators arrested as of Tuesday, according to the OVD-Info human rights group, which tracks political arrests. 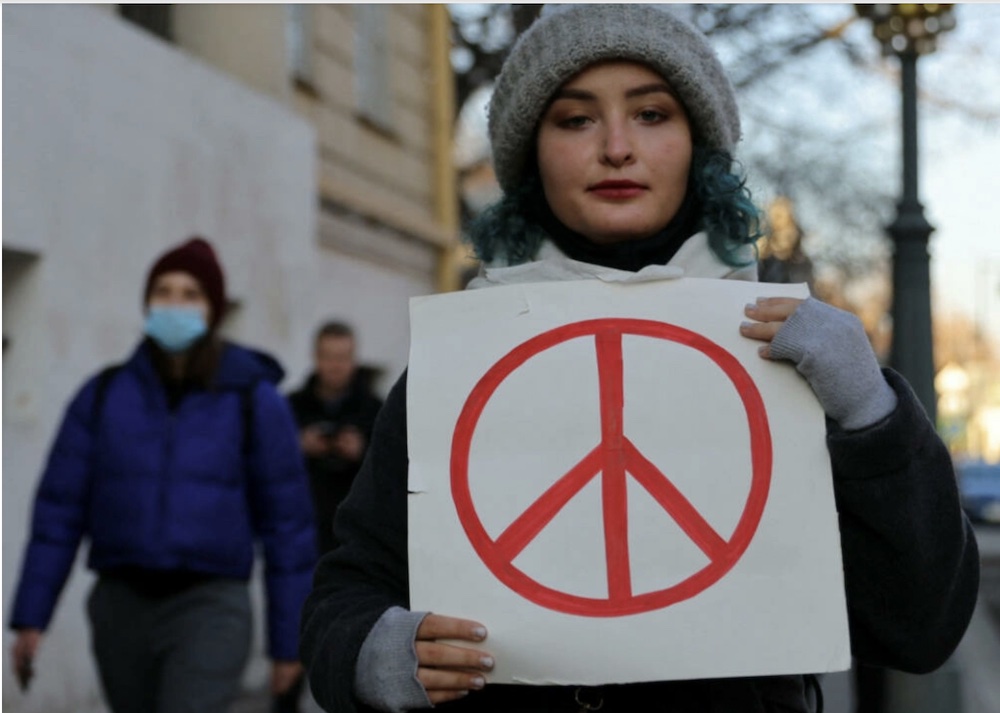 A person holds a sign during a protest against Russian invasion of Ukraine in Moscow on February 27, 2022. © Evgenia Novozhenina, Reuters

And despite a crackdown by the Russian authorities, opposition to Moscow’s war in Ukraine is gaining support. While some continue to demonstrate publicly, others are setting up rear bases on the Internet and circumventing restrictions by using social networks, encrypted messaging and VPN servers.

“I’m not afraid, I went out alone,” a user named Stanislav wrote on Twitter. The message is accompanied with a photo of him protesting on a street in the town of Azov in the western Russian oblast of Rostov. The 30-year-old holds a sign that reads “#НЕТВОЙНЕ” (No War) in large black letters.

Fear of repression has meant that only a minority of Russians are publicly expressing their opposition to the invasion. However, the anti-war movement is gathering support on the Internet, mainly through social networks and encrypted messaging services such as Telegram and Signal.

On Twitter, the hashtag #ЯпротивВойны (I’m against the war) was trending in Russia on Tuesday. “This has been the case since the beginning of the war,” Stanislav told FRANCE 24.

Discretion when faced with repression

Most of the opposition seems to be fomenting behind screens since, under Vladimir Putin, to oppose the war out on the streets risks arrest and conviction. This is reflected in the daily figures released by OVD-Info.

The NGO told FRANCE 24 that it tracks the number of people arrested at anti-war rallies – not the number of participants. Nearly a week after the start of the Russian invasion, the numbers are already significant.

“We have never seen such a large number of detainees per day,” said Grigory Durnovo, an analyst for the group. “We counted at least 6,489 detainees in five days. This is enough to show us the number of people willing to go out on the streets and express their views,” he said.

A Facebook post on Tuesday by the NGO mentions more than 3,100 arrests in Moscow, more than 2,000 in St. Petersburg, about 100 in Yekaterinburg and a few dozen in other, less populated cities across the country.

While the arrests have not prevented thousands of Russians from defying the law to express their opposition to the war, the vast majority prefer to maintain a low profile.

Durnovo attributed this to a wave of repression seen in 2021, notably with the closure of celebrated human rights group Memorial, as well as the criminal prosecution of people who participated in protests earlier this year.

Twitter, Signal and Telegram: the backbone of the anti-war movement

But protesters still find ways to express their opposition to the war while remaining under the radar.

“Contacts between protesters are mainly on Twitter and Telegram,” says Stanislav, who depicts them as networks of solidarity. Members on these groups share information from independent media (including the online TV channel Dojd), relay petitions and support protesters arrested by the police.

“We help them pay fines and also find lawyers to help them,” he said.

(Click here for a version of this article in French).

Unable to rely on Russian media sources regarding the protests, OVD-Info receives information directly from the field as well as from the detainees themselves. “They call us via our hotline or send messages to our Telegram bot,” Durnovo explained. “We ask them to tell us the number of detainees on a police bus or in a police station along with their names, the name of the city and any other significant information, such as possible cases of violence.”

He added that this information is crosschecked with other sources. This includes independent media, Telegram channels and, to a lesser extent, statements from police officials (which is compared with data collected elsewhere).

“The official media sometimes mentions anti-war protests but we can’t use them as a source because they don’t tell the whole story. Sometimes we can quote the number of detainees from the statements of police officials and compare it with our own data,” he said.

In addition to NGOs, citizens and professional groups have been taking up the anti-war banner by using social networks or getting support from independent media.

A number of petitions and open letters have been circulating on the Internet since the start of the invasion, including one from Russian lawyers citing Russian violations of the UN Charter. Russian scientists have posted a video on YouTube expressing their opposition to the war.

The most significant of these initiatives remains a Change.org  petition entitled, Stop the War with Ukraine. Launched by Lev Ponomarev, a Russian political activist committed to the defence of human rights, the text calls on Russian citizens to resist the war. It exceeded 1 million signatures on Tuesday.

The petition calls for “an immediate ceasefire of the Russian armed forces and their immediate withdrawal from the territory of the sovereign state of Ukraine”.

According to Ponomarev, if a million signatures are gathered, it means that tens of millions of people are opposed to the war against Ukraine, given the difficulty many Russians have in accessing the Internet.

‘Restrictions can be circumvented on the Internet’

On social networks, many messages testify both to the vigorous opposition that some Russians have against the war and the government, as well as their reluctance to go and shout it out on the streets.

“In the West, foreigners write on social networks, ‘It’s up to the Russians to stop the dictator’ – but how on earth? This monster will crush any protest,” read one comment under a Facebook post.

“My friends went out to demonstrate in Moscow today with placards. No one joined them,” another user lamented, before ironically remarking in another message: “You have to go out to sing Ukrainian songs: singing is not yet banned!”

Despite the Russian authorities’ efforts to censor certain online resources, demonstrating opposition to the Russian government seems much less risky on the Internet than on the streets.

According to Human Rights Watch, Russian authorities have threatened to fine or block several independent Russian media outlets if they do not remove certain publications about the war in Ukraine. The NGO also expressed concern about the sharp rise in censorship. In recent days, Facebook and Twitter have also come under fire from Russia’s communications watchdog, Roskomnadzor, which is now restricting their access.

However, as Stanislav points out, “on the Internet, restrictions can be circumvented. Many online resources can still be accessed using a VPN (virtual private network), which is widely used. The VPN transmits traffic via servers in a country other than Russia, where sources of information can be blocked”, he added.

However, he is not satisfied with just this rear base on the Internet. Even if he is alone each time when he goes out to protest – his friends are afraid to demonstrate with him in public – he says he wants to continue to protest on the streets, saying: “Protesting only on the Internet cannot lead to much.”

This article is a translation from the original in French.