Just a year after angering climate campaigners by voting down a resolution to call for a Fossil Fuel Non-Proliferation Treaty, the European Parliament on Thursday overwhelmingly approved the measure, demonstrating that “momentum is growing”  in the push for a global, rapid shift away from planet-heating oil, gas, and coal. 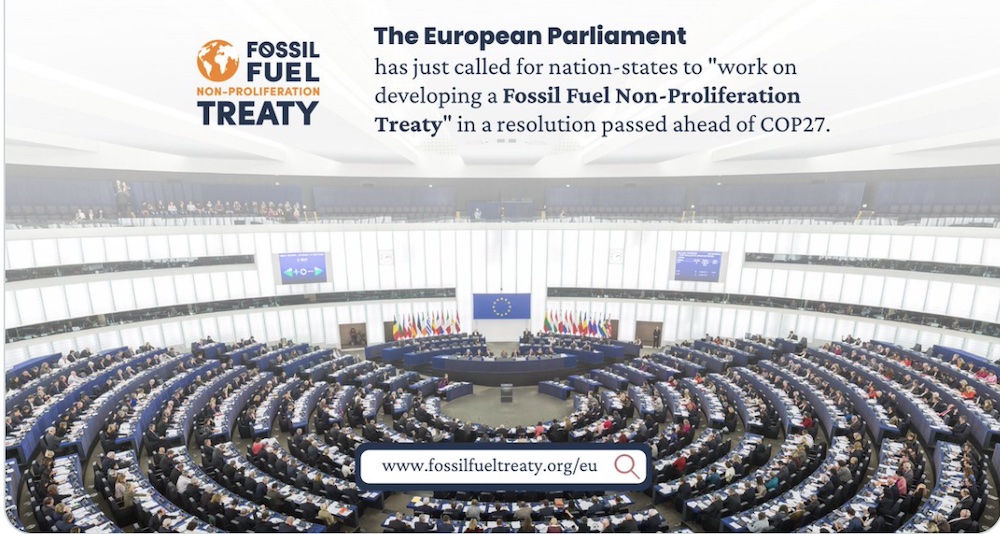 “This is a major development in the global push for a fossil fuel treaty,” said the Fossil Fuel Non-Proliferation Treaty Initiative, an international campaign group.

The resolution outlines the Parliament’s demands for the 2022 United Nations Climate Change Conference (COP27), which is scheduled to begin in Sharm El Sheikh, Egypt on November 6.

Included in  the resolution  is language demanding that “all parties must make financial flows—public and private, domestic and international—compatible with the path towards the 1.5°C target in the Paris Agreement; reiterates the need to urgently end fossil fuel subsidies” and that encourages nations represented in the European Parliament “to work on developing a fossil fuel non-proliferation treaty.”

Such a treaty would end all new coal, oil, and gas production; phase out existing production infrastructure, which is responsible for 80% of fossil fuel emissions over the last decade; and  ensure a just transition  to “enable economic diversification” and “support every worker, community, and country.”

E.U. members must “stand ready to contribute to closing the gap necessary to limit global warming to 1.5°C, in a just, socially balanced, fair, and cost-effective way, while taking into account aspects of global fairness and equity and the E.U.’s historical and current responsibility for the emissions causing the climate crisis,”  reads  the resolution.

“We welcome this resolution,”  said  Tzeporah Berman, chair of the Fossil Fuel Non-Proliferation Treaty Initiative. “Phasing out fossil fuels is now clearly the test for climate leadership at COP27 in Egypt. It is not a transition if we are growing the problem. If we are going to break free from the tyranny of oil we need countries to cooperate to stop the expansion of fossil fuels.”

The resolution was passed just over a month after the World Health Organization  led  a coalition of global public health experts calling for a fossil fuel non-proliferation treaty on the grounds that the continued extraction of coal, oil, and gas poses “serious global health risks.”

Youth climate leaders made a  similar call  in June, and more than 100 Nobel laureates, 69 cities, and more than 1,700 civil society groups have  supported the push for such an agreement.

By joining the tiny Pacific island nation, which is vulnerable to rising sea levels and other impacts of the climate crisis, in supporting the treaty “the E.U. can stand on the right side of history,”  said  Tasneem Essop, executive director of Climate Action Network International.

“The momentum behind a treaty to keep fossil fuels in the ground in a fair and timely fashion is phenomenal and growing,”  said  Andrew Simms of the Rapid Transition Alliance.