An appeal from Mayors for Peace

On the occasion of its 10th General Conference on October 19-20, 2022, we, representatives of Mayors for Peace member cities, engaged in dynamic discussions on the theme “Creating a Peaceful, Nuclear-Weapon-Free World: Cultivating a Culture of Peace in Civil Society.” The event also commemorated the 40th anniversary of the establishment of Mayors for Peace. In August 1945, atomic bombs were dropped on Hiroshima and Nagasaki, and the lives of over 210,000 people were ruthlessly stolen by the end of that year. Those who barely managed to survive were left with deep psychological and physical wounds that have yet to heal even today, 77 years later. 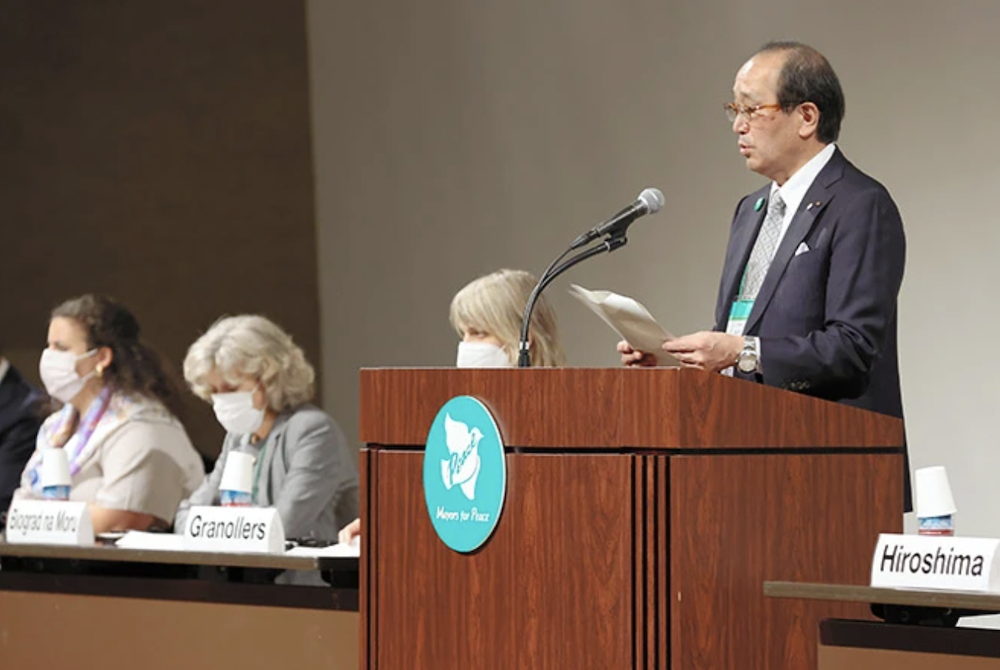 Hiroshima Mayor Kazumi Matsui reads the Hiroshima Appeal at the 10th General Conference of Mayors for Peace in Hiroshima on Oct. 20. (Jun Ueda)

In June 1982, during the 2nd UN Special Session on Disarmament, then-Mayor Araki of Hiroshima established Mayors for Peace, calling on the cities of the world to transcend national borders and join in solidarity to forge a path toward the abolition of nuclear weapons. Since then we have made steady progress on our path, and in our 40th year, membership in our non-partisan international NGO has now grown to 8,213 member cities in 166 countries and regions around the world.

In addition to our long-standing objectives to forge a path toward our goal of realizing lasting world peace, namely, Realize a world without nuclear weapons and Realize safe and resilient cities, in July 2021, we added a third objective, Promote a culture of peace, when we adopted the Vision for Peaceful Transformation to a Sustainable World (PX Vision for short).

The first objective, Realize a world without nuclear weapons, has been set forth with the intention of striving for the total global abolition and elimination of nuclear weapons as cities and their citizens remain their targets and taking into consideration the catastrophic environmental and economic consequences on a global scale of the use of those weapons.

The second objective, Realize safe and resilient cities, means that we recognize that certain global trends in international security, the environment, development, poverty, and the economy have profound effects upon cities everywhere and, if unaddressed, threaten the peaceful coexistence— if not the very existence—of the human race. To meet these challenges, we resolve to advance basic human needs and sustainable development.

Since the Russian attack against Ukraine, this armed conflict has led to a deterioration of international peace and security, jeopardizing the shared values of international society. The world has witnessed new threats to use nuclear weapons in this armed conflict, raising the risk of nuclear war to the highest level. In addition, the dangerous theory of nuclear deterrence, which attempts to justify the existence of such weapons, has gained further momentum. Moreover, possessor states continue to modernize their nuclear forces, diverting vast economic and technical resources away from meeting the pressing needs of sustainable development everywhere.

Amid such circumstances, at the First Meeting of States Parties to the Treaty on the Prohibition of Nuclear Weapons (TPNW) held in June, the Vienna Declaration and Vienna Action Plan were adopted. These documents reaffirm the inhumanity of nuclear weapons, unequivocally condemn any threat of use of such weapons, and call for an increase in the number of ratifying states, as well as improvement and enrichment of victim assistance provision. Above all else, we heartily welcome that these documents reaffirm the compatibility and complementarity of the TPNW with the Treaty on the Non-Proliferation of Nuclear Weapons (NPT).

In contrast, at the 10th NPT Review Conference held in August, negotiations broke down, with many non-nuclear-weapon states taking note of the failure of the nuclear-weapon states to meet their disarmament obligations. The Conference came to an end, failing to reach an agreement to adopt the draft of the Final Document, which stated that a recognition of the inhumane consequences of the use of nuclear weapons must be the foundation for nuclear disarmament. This negative outcome only serves to further hinder progress toward nuclear disarmament and rejects the hibakusha’s wish for the abolition of nuclear weapons.

In doing so, however, while making efforts to lead the will of the public is one possible approach, we believe it is of the utmost importance rather to engage members of civil society, especially the younger generation—the driving force of the future. We will strive to create an environment in which they, in deep recognition of the catastrophic humanitarian consequences of the use of nuclear weapons, raise peace awareness and prompt leaders to correct their policies in order to abolish nuclear weapons. To that end, we will work even harder to promote a deep-rooted culture of peace in civil society by means such as fostering youth leadership for future peace activities.

In response to the unfolding international situation, we hereby strongly appeal to the UN and all national governments to take the following actions at present to lower rising international tension and reduce the risk of the use of nuclear weapons:

* Share in the hibakusha’s earnest wish for peace and work for nuclear disarmament that will encompass the swift global abolition and elimination of all nuclear weapons. We especially appeal to nuclear-weapon states to take immediate action to fulfill and complete their NPT obligations, as well as agreements in the past Review Conferences.

* Break away from the theory of nuclear deterrence, ratify the TPNW, and increase efforts to pursue the total elimination of nuclear weapons, and progress on general and complete disarmament.

* Bring “Disarmament and Cities” forward as a topic for discussion at the UN General Assembly, since cities and their citizens must never again be targets of nuclear weapons.

* Visit the atomic-bombed cities of Hiroshima and Nagasaki and promote initiatives to convey to the world the realities of atomic bombings to make the experience of the atomic bombings a shared global experience as we approach the time when there will no longer be any hibakusha.

* Work to solve the diverse range of issues that threaten the peaceful coexistence between the whole of humanity to ensure the safety and security of our fellow citizens.

* Support all measures through education, advocacy, and international cooperation that contribute to the promotion of a culture of peace, including youth education on disarmament and non-proliferation.

With this Appeal, we reaffirm and strengthen our common commitment to achieve our agreed goals in the service of world peace and the security and prosperity of future generations. In commemoration of the 40th anniversary of the establishment of Mayors for Peace, we hereby pledge to further strengthen our solidarity and continue our utmost efforts to promote peacebuilding by cities under three objectives in the PX Vision, following our Action Plan for up until the year 2025.