An article from France 3

There were a hundred women in the center of Chambéry who came and cut a lock of hair in solidarity with the women of Iran. These locks, also collected this Saturday in Grenoble and Lyon, will be sent to the Iranian Embassy.

The women of Chambéry “want it to be known: we are in solidarity, in sorority” with the women of Iran, who “fight to be free” and have been demonstrating since the death. of young Masha in a police station in Tehran. 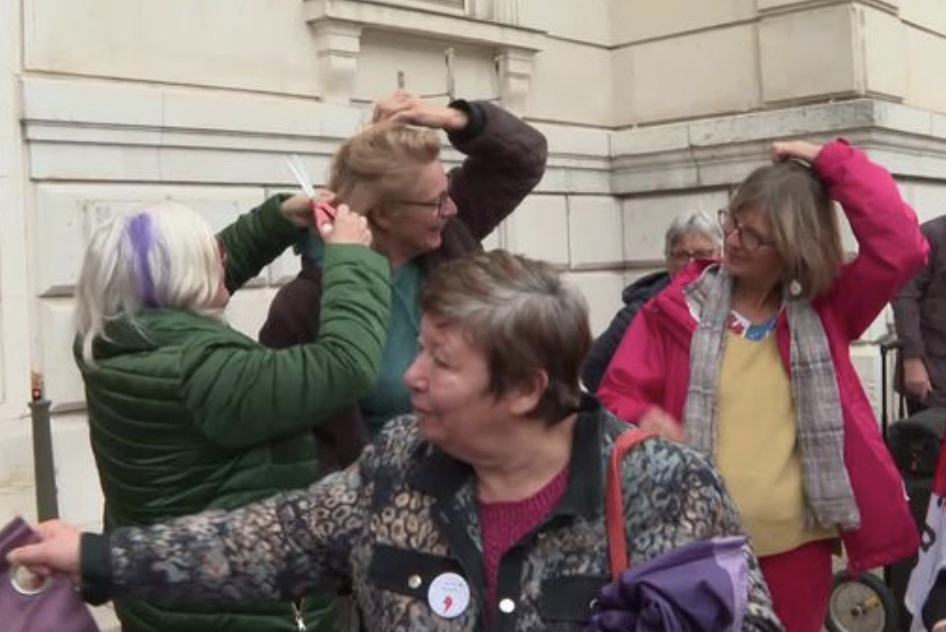 The locks of hair will be sent to the Iranian Embassy. • © France 3 Alps

They are a hundred who have responded to the call of the League of Human Rights, but also of the CGT, the PCF, EELV, the PS of Savoie, Amnesty International and the Mouvement de la Paix.

For the representative of Mouvement de la Paix in Savoie, Laurette Mugnier, “it’s nothing compared to all that these women have endured for so long, in Iran but not only. We also think of the Afghan women who are fighting against the Taliban, the little girls who cannot go to school. At the Mouvement de la Paix we demand that a culture of peace be promoted at the call of the UN. We can’t just watch them fight alone in Iran. The support of the people is important for those who are fighting.”

Singing in Persian, they sing Bella Ciao, the song of Italian partisans and resistance fighters during the Second World War. And on the steps of the town hall, a mauve cloth collects locks of long hair, short hair, from women and men, of all ages. “They will be sent to the Iranian Embassy,” promises Marc Pascal, ecologist and member of the “all migrants” collective. “And the same symbol is used in other cities: the embassy should receive hair from many places in France”.

Already practiced at the beginning of the week by actresses, the gesture has caught on. Marc Pascal insists that “It’s not just a symbol. That people agree to come and undermine their physical integrity by cutting their hair is a strong gesture that says that we are physically committed, that it is important”.

The same demonstration was organized Saturday morning, in Lyon. And in the afternoon, in Grenoble.