An article from The International Campaign to Abolish Nuclear Weapons (ICAN)

The historic first Meeting of States Parties to the Treaty on the Prohibition of Nuclear Weapons concluded in Vienna today 23 June with the adoption of a political declaration and practical action plan that set the course for the implementation of the Treaty and progress towards its goal of the total elimination of nuclear weapons. 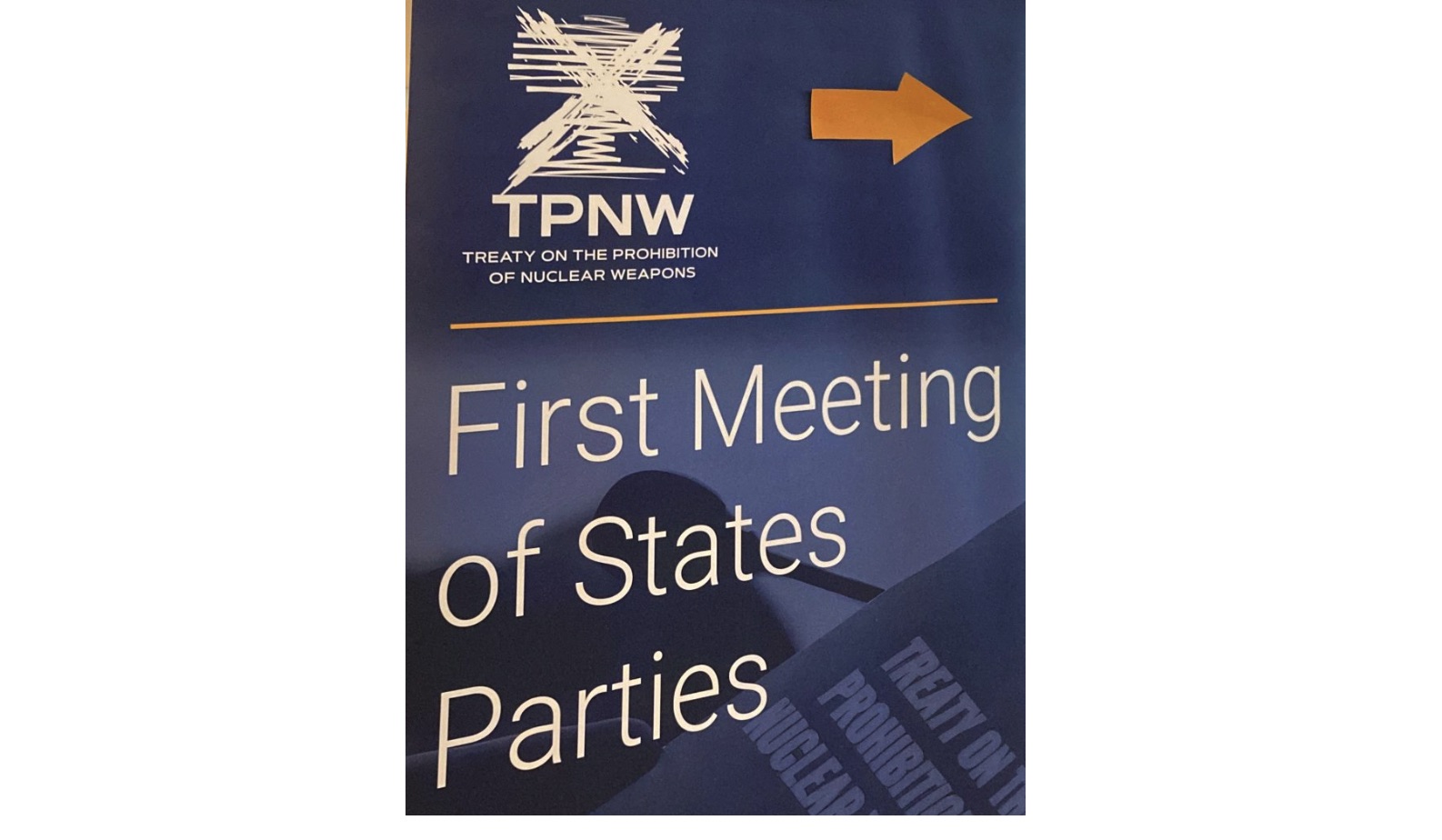 States parties met amid heightened tension and growing risks of the use of nuclear weapons, following Russia’s invasion of Ukraine and its threats to use nuclear weapons. Addressing the opening session of the meeting, United Nations Secretary-General Antonio Guterres said, “The once unthinkable prospect of nuclear conflict is now back within the realm of possibility. More than 13,000 nuclear weapons are being held in arsenals across the globe. In a world rife with geopolitical tensions and mistrust, this is a recipe for annihilation.”

During the meeting, many states parties condemned Russia’s actions, expressing their determination to move ahead with implementing the TPNW and eliminating nuclear weapons, based on the catastrophic humanitarian consequences of their use and the growing risks that such use could occur. These discussions were supported by harrowing testimony from survivors of use of nuclear weapons in Hiroshima and Nagasaki (Hibakusha) and representatives of communities harmed by testing of nuclear weapons in the Pacific, Kazakhstan and elsewhere, which illustrated the grim reality of nuclear weapons and highlighted the importance and urgency of the meeting’s work.

Nagasaki survivor Masao Tomonaga said “This political declaration is a very strong document, despite many difficulties we face. With this powerful document we can go forward, and all Hibakusha support this,it is a great document to make my city, Nagasaki, the last city ever to suffer from an atomic bombing”.

Representatives of youth groups emphasized the need to engage young people in universalizing and implementing the treaty, and the role that they could play in helping to achieve the treaty’s aims. A delegation of parliamentarians from 16 countries (including nine NATO members) highlighted the work of parliamentarians in building support for the TPNW domestically, persuading governments to join, and speeding the processes of ratification.

The meeting concluded with the adoption of a Declaration  and Action Plan. In the Declaration, states parties expressed their alarm and dismay at threats to use nuclear weapons, and condemned unequivocally “any and all nuclear threats, whether they be explicit or implicit and irrespective of the circumstances.” Affirming that the TPNW is needed more than ever in these circumstances, the states parties resolved to “move forward with its implementation, with the aim of further stigmatizing and de-legitimizing nuclear weapons and steadily building a robust global peremptory norm against them.”

The Declaration reiterated the humanitarian basis of the treaty and the moral, ethical and security imperatives which inspired and motivated its creation and which now drive and guide its implementation. States parties resolved to move ahead with implementing all aspects of the treaty, including the positive obligations aimed at redressing the harm caused by nuclear weapons use and testing. They also reaffirmed the complementarity of the treaty with the international disarmament and nonproliferation regime, including the Nuclear Non-proliferation Treaty (NPT), and undertook to continue to support the NPT and all measures that can effectively contribute to nuclear disarmament.

The Declaration concluded that “In the face of the catastrophic risks posed by nuclear weapons and in the interest of the very survival of humanity … We will not rest until the last state has joined the Treaty, the last warhead has been dismantled and destroyed and nuclear weapons have been totally eliminated from the Earth.”

The Action Plan contains 50 specific actions for taking forward the mission of the treaty and realizing the commitments made in the Declaration. The Action Plan includes actions on universalization; victim assistance, environmental remediation and international cooperation and assistance; scientific and technical advice in support of implementation; supporting the wider nuclear disarmament and non-proliferation regime; inclusion; and implementation of the treaty’s gender provisions.

The meeting also took a number of decisions on practical aspects of moving forward with implementation of the treaty. These included:

* Establishment of a Scientific Advisory Group, to advance research on nuclear weapon risks, their humanitarian consequences, and nuclear disarmament, and to address the scientific and technical challenges involved in effectively implementing the Treaty, and provide advice to states parties.

* Deadlines for the destruction of nuclear weapons by nuclear-armed states joining the treaty: no more than 10 years, with the possibility of an extension of up to five years. States parties hosting nuclear weapons belonging to other states will have 90 days to remove them.

* Establishment of a program of intersessional work to follow the meeting, including a coordinating committee and informal working groups on universalization; victim assistance, environmental remediation, and international cooperation and assistance; and work related to the designation of a competent international authority to oversee the destruction of nuclear weapons.

On the eve of the meeting, Cabo Verde, Grenada, and Timor-Leste deposited their instruments of ratification, which will bring the number of TPNW states parties to 65. Eight states told the meeting that they were in the process of ratifying the treaty: Brazil, Democratic Republic of the Congo, Dominican Republic, Ghana, Indonesia, Mozambique, Nepal and Niger.

ICAN Executive Director Beatrice Fihn welcomed the outcome of the meeting and the many concrete actions agreed. “This meeting has really been a reflection of the ideals of the TPNW itself: decisive action to eliminate nuclear weapons based on their catastrophic humanitarian consequences and the unacceptable risks of their use. The states parties, in partnership with survivors, impacted communities and civil society, have worked extremely hard over the past three days to agree on a wide range of specific, practical actions to take forward every aspect of the implementation of this crucial treaty. This is how we are building a powerful norm against nuclear weapons: not through lofty statements or empty promises, but through hands-on, focused action involving a truly global community of governments and civil society”