A press release June 15 from La Via Campesina

La Via Campesina, the global peasant movement representing the voices of more than 200 million small-scale peasants from Asia, Africa, Europe and the Americas, has been mobilizing all week against the WTO. The food crisis that is currently hitting the world is further proof that free trade – far from bringing about food security – is making people starve. 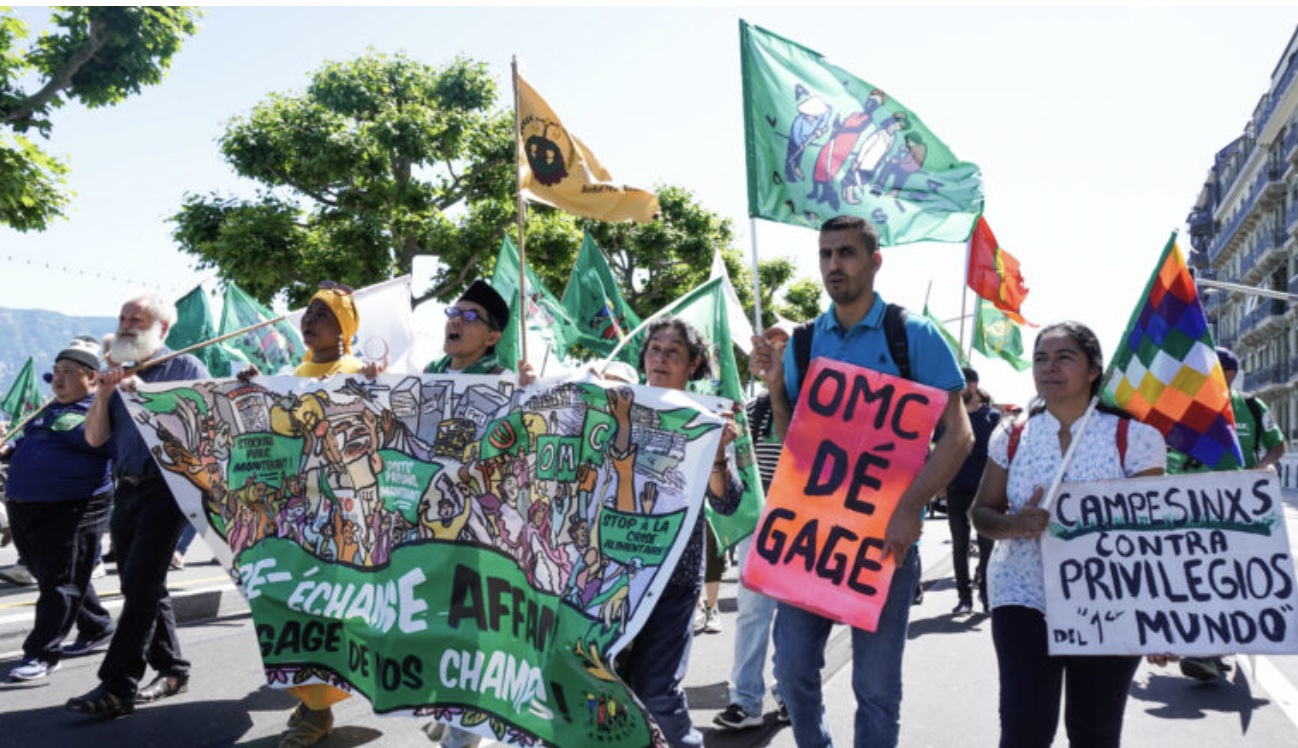 The World Trade Organization (WTO) has once again failed to offer a permanent solution on public stockholding for food security purposes. For more than eight years, rich countries have been blocking concrete proposals from African and Asian members of the G33 in this regard.

Jeongyeol Kim, from the Korean Women Peasant’s Association and an International Coordination Committee (ICC) member of La Via Campesina, points out that:

“Free Trade Fuels Hunger. After 27 years under the rule of the WTO, this conclusion is clear. It is time to keep agriculture out of all Free Trade Agreements. The pandemic, and the shock and disruptions induced by war have made it clear that we need a local and national food governance system based on people, not agribusinesses. A system that is built on principles of solidarity and cooperation rather than competition, coercion, and geopolitical agendas.”

Burry Tunkara, from the Gambian Organization of Small-scale Farmers, Fishermen and Foresters and one of the main youth leaders of La Via Campesina, echoes the same sentiment in this testimony:

“The WTO only defends the rich and their commercial interests. It is a tool of neo-colonialism. It only serves the interests of multinationals to find new markets and cheaper labour. It’s time to stop that!

The socio-economic agenda of the poorest and low-income countries is not a priority for the WTO. The proof: its inability to provide a safeguard mechanism against the “dumping” of rich countries and its approach to fisheries subsidies to the detriment of small-scale fisherfolk. There is no point in trying to reform an institution built to favour the business interests of a handful of multinational corporations.

Perla Álvarez from Paraguay, and member of the Latin American Coordination of La Via Campesina (CLOC) stated that a systemic change is urgent and necessary:

“The global food crisis is our moment of reckoning. There is no place for a ‘business as usual’ approach here. We are presenting short-term and long-term proposals that can radically shift the way in which trade affects farming communities around the world.”

Today, June 15, from Geneva, while the WTO Ministerial Conference has once again betrayed the expectations of the populations that have been most affected by the food crisis, we, La Via Campesina, share our proposals;

La Via Campesina calls on all national governments to rebuild public stocks and to support the creation of food reserves at the community level with local products from agroecological practices. LVC also called on all governments to put in place the anti-dumping legislation necessary to prevent exporters from destroying local markets.

Yudhvir Singh of the Bhartiya Kisan Union, one of the unions that spearheaded the historic mobilization of Indian peasants in 2021, shared his country’s experience with public food stocks:

“Peasants need strong public policies, such as minimum prices and public stock, to continue to make a decent living by producing food. The WTO’s attacks against our model of market regulation are extremely dangerous. The G33 must continue to resist and build based on the aspirations and hopes of small-scale producers.”

La Via Campesina has called for an immediate suspension of all existing WTO rules that prevent countries from developing public food stocks and regulating market and prices. Governments should have the right to use self-selected internal criteria to protect and promote their food sovereignty. Each country should be able to develop its own agricultural and food policy and protect the interests of its peasants, without harming other countries. The use of agricultural products for agro-fuels should be prohibited. La Via Campesina has also called for a halt in speculation.

We, La Via Campesina, insist that within the framework of the pandemic and the global supply crisis, governments should prioritize local markets.

Morgan Ody, peasant in Brittany, France, and general coordinator of La Via Campesina, stated on behalf of the global peasant movement:

“The World Trade Organization is a failed project. Our global peasant movement calls on all States, especially those in the South, to leave the WTO immediately. We must create a new international framework for agriculture and trade based on food sovereignty. Only then can we defend the interests of small-scale food producers.”

Note: La Via Campesina counts 181 peasant organisations in over 80 countries as its members. The global peasant network and its allies led the negotiations in the UN for 17 years, resulting in the United Nations adopting a UN Declaration for Rights of Peasants and Other People Working in Rural Areas (UNDROP) in 2018.