Demonstration in Dijon and interview at the Regional Prefecture

On June 16, 2022 at 12:30 p.m., 13 whistleblowers from the ‘Collectif Bourgogne Franche-Comté pour l’abolition des weapons nucleaires’ unfurled banners in Place Darcy in Dijon asking France not to shun the Treaty on Nuclear Weapons. Prohibition of Nuclear Weapons (TPNW). A delegation met a representative of the Prefect on this subject at 2 p.m. 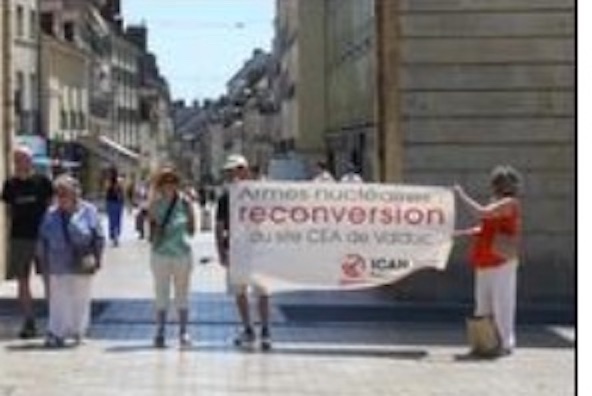 Nuclear weapons leave no one safe. They do not prevent conventional warfare, as the news claims, but they protect the aggressor. They are only an instrument of terror against populations and they divert astronomical sums of money that should be devoted, in particular, to the fight against climate change. They are ineffective, dangerous, illegal, undemocratic, demotivating, immoral and ruinous.

The Treaty on the Prohibition of Nuclear Weapons (TPNW) was adopted by a majority of States (122) at the UN on July 7, 2017. It is the only treaty that legally prohibits nuclear weapons. It entered into force on January 22, 2021, notably complementing other instruments, such as the Nuclear Non-Proliferation Treaty (NPT).

The UN will host from 21 to 23 June 2022 in Vienna the first meeting of the States Parties to the TPNW with in particular European partners such as Germany, Austria, Finland, Ireland, Malta, Norway, Switzerland, Sweden. Some take part in this process as an observer.

The ICAN France Campaign, led by a large number of organizations, asks the President of the Republic not to isolate our country from a multilateral process led by the UN. France should participate as an observer in the first meeting of States Parties to the TPNW.

France, which never ceases, whatever its government, to say that it is a responsible State, does not have the right to isolate itself from the international and European scene. It does not have the right to refuse dialogue with a view to acting for our human and environmental security in the face of the nuclear arsenals which constantly threaten us; it must be present as an observer State at the first meeting of the TPNW. Can we imagine for a single moment that France leaves its seat empty at this UN meeting, thus siding with absentees such as authoritarian or dictatorial powers (Russia, China, North Korea)?

The same day at 5 p.m. in Moloy, near the site of the Commissariat for Atomic Energy and Alternative Energies (CEA) in Valduc, which maintains and modernizes 290 French nuclear weapons, whistleblowers deployed banners .

The banners call for:

– compliance by France with article 6 of the Non-Proliferation Treaty (NPT) to which it acceded in 1992 and of which it violates the spirit and the letter, while it asks other States to respect international law,

– France’s accession to the Treaty on the Prohibition of Nuclear Weapons (TPNW),

– and the reconversion to peaceful activities of the CEA-DAM sites, including that of Valduc.

Between June 16 and June 18, actions have been or will be carried out in Paris on the occasion of the next meeting in Vienna, but also in London, Berlin, Barcelona, ​​Turin and in front of the Faslane base (Scotland) which houses British nuclear submarines, so that the countries of Europe support the dynamics of the TPNW.

How can citizens support the TPNW?

– Read and distribute the op-ed by 56 French parliamentarians in Le Monde on June 18, asking that France be an observer in the meeting of States Parties to the TPNW in Vienna

– Write to your Mayor, so that your municipality signs the Cities’ Appeal of ICAN for nuclear disarmament, and ask your Deputy and Senator for France to join the TPNW.

– Ask your bank about its funding of the atomic bomb by participating in the action campaign on this topic.

Watch the video “The Beginning of the End of Nuclear Weapons”. Discover the history with photos of the actions in Dijon and Valduc since 2014. Inform those around you about the seven vices of nuclear deterrence. Read the study on French military nuclear waste.