Students across the United States walked out of their classrooms Thursday to protest gun violence and years of inaction in Washington, D.C. they blame for allowing mass shootings to continue, like the one that killed 19 children and two adults at Robb Elementary School this week. 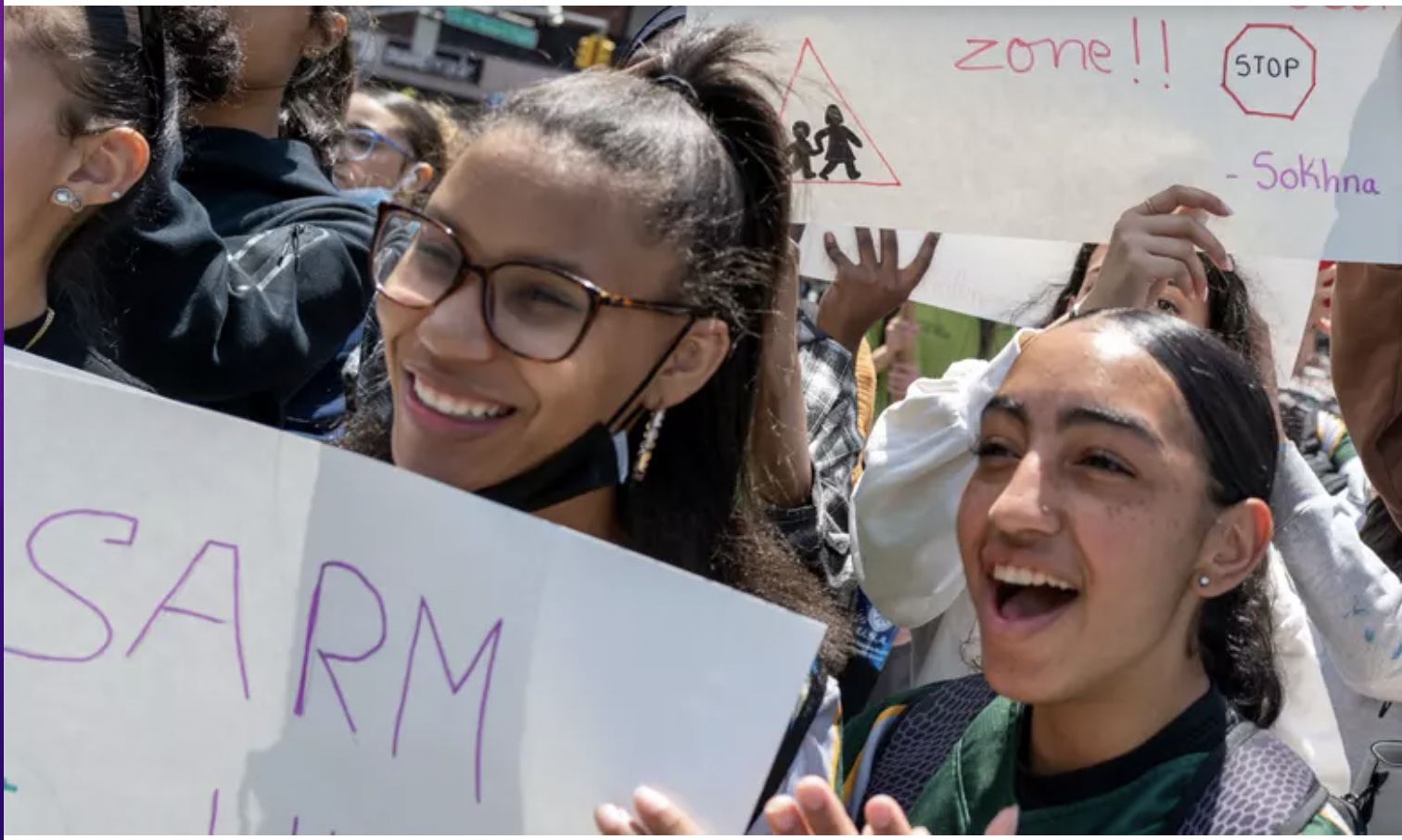 At 12:00 p.m. Eastern time, students and teachers at more than 80 elementary, middle, and high schools took part in the nationwide demonstration organized by Students Demand Action, a branch of Everytown for Gun Safety.

“We refuse to go on like this,” tweeted the organization.

“We plan to host a walkout in protest of gun violence in schools and inaction regarding gun laws this Thursday at 11 a.m. in accordance with the nationwide walkout,” wrote  students in Whitefish Bay, Wisconsin. “We believe it is very important that our community recognizes the voices of students regarding mass shootings in schools as we are the group most affected by this new reality, yet have the least say in changing the laws and statutes that impact us so much.”

Northwood High School students in Irvine, California condemned “the ‘thoughts and prayers’ of our so-called leaders” and called gun violence and mass shootings, which have taken place at 27 U.S. schools  so far this year, “a symptom of a larger disease of white supremacy, toxic masculinity, and antisemitism that often motivates deranged shooters to carry out these horrors.”

“We strongly believe in the right of Americans, especially students in light of recent shootings in Texas, to lead a free, prosperous, and secure life in the wealthiest nation on Earth,” they wrote. “We are walking out because we refuse to accept a country where gunfire can ring out at any moment, whether it’s while grocery shopping at a supermarket in Buffalo, New York, at an elementary school in Uvalde, Texas, at a party in San Bernardino, or at graduations across the country. Enough is enough. No more thoughts and prayers.”

The walkouts are being held as representatives of Moms Demand Action, Students Demand Action, and Everytown join Democratic lawmakers at a rally in Washington, D.C. to demand passage of gun control laws  such as the Bipartisan Background Checks Act of 2021 (H.R. 8), which would expand background checks for all gun purchases and transfers, and the Enhanced Background Checks Act of 2021 (H.R. 1446), which would close a loophole that allows gun sales without a background check if three businesses days have passed.

“We ask our senators: WHO do you work for?” said  Shannon Watts, the founder of Moms Demand Action. “Do you work for the 90% of Americans who support common-sense gun safety laws? Or do you work for gun manufacturers who pad their pockets and protect their power while over 110 Americans are shot and killed every day?”

Mia Tretta, a survivor of the Saugus High School shooting in Santa Clarita, California that killed two of her classmates in November 2019, organized a walkout at her school, tweeting, “I’m sorry I couldn’t do my homework, I was planning a life-saving revolution.”

David Hogg, a survivor of the Marjory Stoneman Douglas High School shooting in Parkland, Florida in February 2018 and co-founder of March for Our Lives, called on  communities across the U.S. to hold vigils at their local elementary schools Thursday evening and suggested students hold regular walkouts until legislative action is taken.

“Legislators need to keep in mind that if we can’t vote now, they need to listen because we will be able to vote eventually,” Maddie Ahmadi, a 17-year-old advisory board member for Students Demand Action, told  Bloomberg. “And if they are not hearing us and they are not passing common sense gun legislation, we are going to vote them out of office.”