A new flagship UN report on climate change out Monday (April 4) indicating that harmful carbon emissions from 2010-2019 have never been higher in human history, is proof that the world is on a “fast track” to disaster, António Guterres has warned, with scientists arguing that it’s ‘now or never’ to limit global warming to 1.5 degrees. 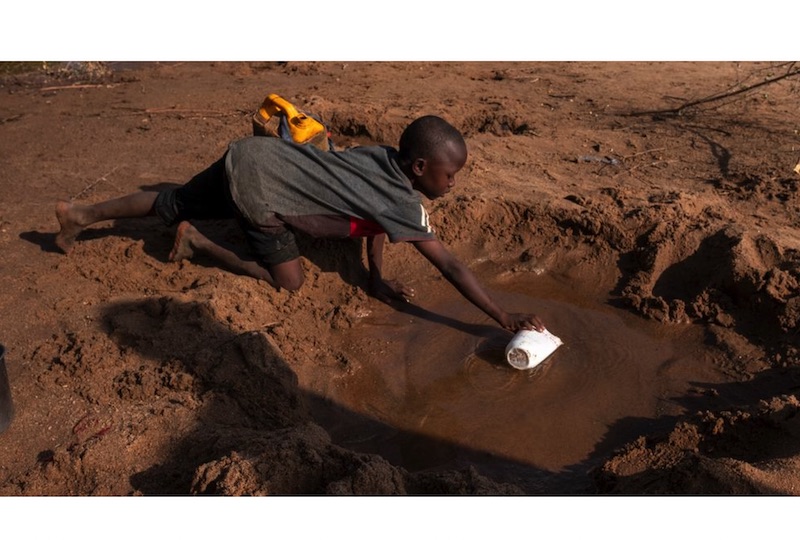 © UNICEF/Sebastian Rich. A young boy collects what little water he can from a dried up river due to severe drought in Somalia.

Reacting to the latest findings of the Intergovernmental Panel on Climate Change (IPCC), the UN Secretary-General insisted that unless governments everywhere reassess their energy policies, the world will be uninhabitable.

His comments reflected the IPCC’s insistence that all countries must reduce their fossil fuel use substantially, extend access to electricity, improve energy efficiency and increase the use of alternative fuels, such as hydrogen.

Unless action is taken soon, some major cities will be under water, Mr. Guterres said in a video message, which also forecast “unprecedented heatwaves, terrifying storms, widespread water shortages and the extinction of a million species of plants and animals”.

The UN chief added: “This is not fiction or exaggeration. It is what science tells us will result from our current energy policies. We are on a pathway to global warming of more than double the 1.5-degree (Celsius, or 2.7-degrees Fahreinheit) limit” that was agreed in Paris in 2015.

Providing the scientific proof to back up that damning assessment, the IPCC report – written by hundreds of leading scientists and agreed by 195 countries – noted that greenhouse gas emissions generated by human activity, have increased since 2010 “across all major sectors globally”.

In an op-ed article penned for the Washington Post, Mr. Guterres described the latest IPCC report as “a litany of broken climate promises”, which revealed a “yawning gap between climate pledges, and reality.”

He wrote that high-emitting governments and corporations, were not just turning a blind eye, “they are adding fuel to the flames by continuing to invest in climate-choking industries. Scientists warn that we are already perilously close to tipping points that could lead to cascading and irreversible climate effects.”

An increasing share of emissions can be attributed to towns and cities, the report’s authors continued, adding just as worryingly, that emissions reductions clawed back in the last decade or so “have been less than emissions increases, from rising global activity levels in industry, energy supply, transport, agriculture and buildings”.

Striking a more positive note – and insisting that it is still possible to halve emissions by 2030 – the IPCC urged governments to ramp up action to curb emissions.

The UN body also welcomed the significant decrease in the cost of renewable energy sources since 2010, by as much as 85 per cent for solar and wind energy, and batteries.

“We are at a crossroads. The decisions we make now can secure a liveable future,” said IPCC Chair Hoesung Lee. “I am encouraged by climate action being taken in many countries. There are policies, regulations and market instruments that are proving effective. If these are scaled up and applied more widely and equitably, they can support deep emissions reductions and stimulate innovation.”

To limit global warming to around 1.5C (2.7°F), the IPCC report insisted that global greenhouse gas emissions would have to peak “before 2025 at the latest, and be reduced by 43 per cent by 2030”.

Methane would also need to be reduced by about a third, the report’s authors continued, adding that even if this was achieved, it was “almost inevitable that we will temporarily exceed this temperature threshold”, although the world “could  return to below it by the end of the century”.
Now or never

“It’s now or never, if we want to limit global warming to 1.5°C (2.7°F); without immediate and deep emissions reductions across all sectors, it will be impossible,” said Jim Skea, Co-Chair of IPCC Working Group III, which released the latest report.

“This assessment shows that limiting warming to around 2C (3.6F) still requires global greenhouse gas emissions to peak before 2025 at the latest, and be reduced by a quarter by 2030.”

A great deal of importance is attached to IPCC assessments because they provide governments with scientific information that they can use to develop climate policies.

They also play a key role in international negotiations to tackle climate change.

Among the sustainable and emissions-busting solutions that are available to governments, the IPCC report emphasised that rethinking how cities and other urban areas function in future could help significantly in mitigating the worst effects of climate change.

“These (reductions) can be achieved through lower energy consumption (such as by creating compact, walkable cities), electrification of transport in combination with low-emission energy sources, and enhanced carbon uptake and storage using nature,” the report suggested. “There are options for established, rapidly growing and new cities,” it said.

Echoing that message, IPCC Working Group III Co-Chair, Priyadarshi Shukla, insisted that “the right policies, infrastructure and technology…to enable changes to our lifestyles and behaviour, can result in a 40 to 70 per cent reduction in greenhouse gas emissions by 2050. “The evidence also shows that these lifestyle changes can improve our health and wellbeing.”