CPNN has published several articles recently about Russian opposition to the war, including open letters from scientists, from cultural figures, and from the “Congress of Intelligentsia.”

Opposition continues to grow despite draconian, even ridiculous, measures by the Russian government to stifle protest. Protesters risked arrest by massing in public in St. Petersburg, as shown the the photos below from Deutsche Welle. 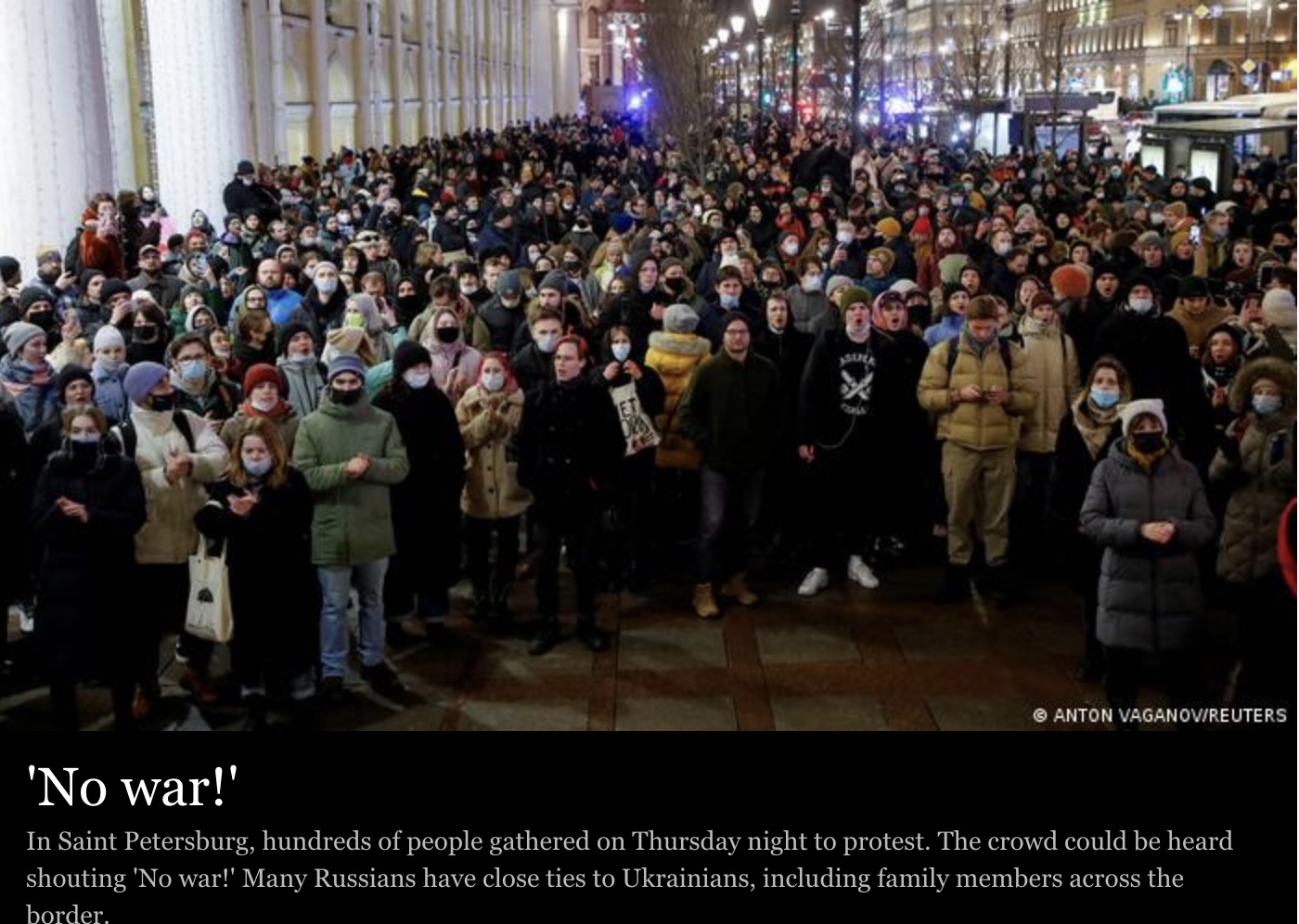 As of February 26, the most comprehensive account of the antiwar movement and government crackdown comes from Moscow Times as follows

The head of Russia’s state-run RT television is in no doubt. If fellow citizens oppose President Vladimir Putin’s action in Ukraine then they are no longer Russians.

Margarita Simonyan, editor-in-chief of the English language international news network, is never one to mince her words and is used to making cutting remarks on Twitter in defense of Putin who she refers to simply as “leader.”

“If you are ashamed of being Russian now, don’t worry, you are not Russian,” was her summation of the anti-war movement at home.

Several thousand Russians demonstrated against the Russian invasion of Ukraine, but the police reaction was the usual one when it comes to Kremlin critics: hundreds of arrests.

So the anti-war movement has moved online, where it is beginning to make itself heard and to garner support, some of it high-profile.

Ukrainian flags adorn profile pictures and teary-eyed emojis are scattered liberally among the online statements. The hashtag #NoToTheWar was trending on Twitter on Saturday.

Since early Thursday, when the invasion of Ukraine began, various Russian celebrities, journalists and bloggers have expressed their horror and helplessness, pleading for an immediate end to the war.

The popular video blogger and documentary filmmaker Yuri Dud saw one of his online posts get a million “likes.”

“I write these words for a reason. When my children grow up and discover this moment in history… and ask me ‘Dad, what did you do?’, I want to have written proof that I did not choose this regime and did not support its imperialist rage,” he wrote.

‘This must be stopped!’

Elena Chernenko, a journalist with the Kommersant daily, said she was excluded from the pool of journalists covering Foreign Minister Sergei Lavrov because she started an anti-war petition among her colleagues.

An open letter from the arts and cultural fields on Saturday had the support of more than 2,000 actors, directors and other creative figures.

They dismissed Putin’s argument that the invasion is a “peacekeeping” operation to save Russian speakers in eastern Ukraine.

“Forcing peace through the use of force is absurd,” the letter said.

Just as many doctors, nurses and paramedics have signed their own online missive.

“No matter how you seek to justify the use of lethal weapons, they are still lethal,” they wrote.

And an anti-war petition on the change.org website has gathered more than 750,000 signatures in two days.

Among the celebrities making their voices heard, including regulars on loyal public television, is popular singer Valery Meladze.

“This must be stopped!” was his message on Instagram on the first day of the invasion.

Dmitry Muratov, the 2021 Nobel Peace Prize laureate and editor-in-chief of the opposition newspaper Novaya Gazeta, expressed his shame in an online video.

“We are suffering,” said Muratov. “Our country, on the orders of President Putin, has started a war against Ukraine. And nobody can stop it. Therefore, to our suffering is added shame.”

In a highly symbolic move, the founders of the “Immortal Regiment,” an organization dear to the Kremlin because it is responsible for preserving the memory of the dead of World War II, called on the Putin “to cease fire,” describing the use of force as “inhuman.”

Moscow’s Garage museum of contemporary art, founded by Kremlin-linked oligarch and Chelsea FC owner Roman Abramovich, announced it would close on Saturday, refusing to “maintain the illusion of normality.”

Also two communist MPs who voted for the recognition of the independence of pro-Russian separatists in eastern Ukraine, have denounced the invasion of Russia’s neighbor.

“I voted for peace, not for war. I voted for Russia to be a shield [for the separatists]… not for Kyiv to be bombed,” wrote MP Mikhail Matveyev.

Addressing the celebrities and “thousands and thousands” of anonymous Russians denouncing the invasion, Ukrainian President Volodymyr Zelensky thanked them and asked them to stop those who “lie to the whole world.”

Putin has described Zelensky and his government as “terrorists” and “a gang of drug addicts and neo-Nazis,” urging the country’s military to topple him. 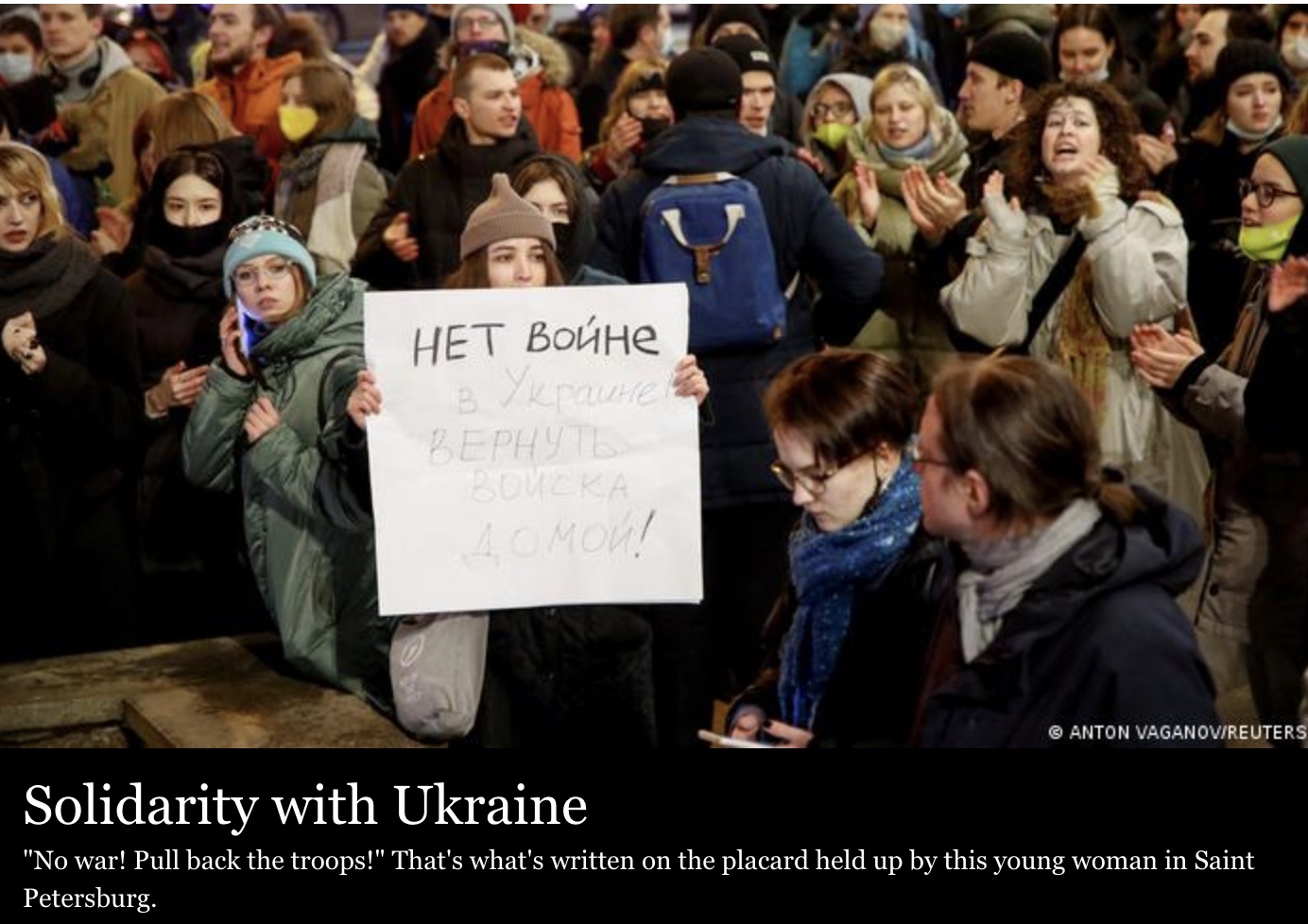 In addition to the article from Moscow Times, here is information from other media sources:

Russia’s communications regulator has ordered media outlets in the country to remove reports describing the continuing attack on Ukraine as an “assault, invasion, or declaration of war” – or face being blocked and fined.

In a statement on Saturday, Roskomnadzor accused several independent media outlets of spreading “unreliable socially significant untrue information” about the shelling of Ukrainian cities by the Russian army and civilian deaths.

Citing a request from the Prosecutor-General’s Office, the regulator said media outlets, including independent television channel Dozhd, will be blocked unless they remove the “unreliable information”.
____________

According to OVD-Info, rights group that tracks political arrests, at least 460 people in 34 cities were detained over anti-war protests on Saturday, including over 200 in Moscow.

Open letters condemning Russia’s invasion of Ukraine kept pouring, too. More than 6,000 medical workers put their names under one on Saturday; over 3,400 architects and engineers endorsed another while 500 teachers signed a third one. Similar letters by journalists, municipal council members, cultural figures and other professional groups have been making the rounds since Thursday.

An online petition to stop the attack on Ukraine, launched shortly after it started on Thursday morning, garnered over 780,000 signatures by Saturday evening, making it one of the most supported online petitions in Russia in recent years

Two lawmakers from the Communist Party, which usually toes the Kremlin’s line, spoke out against the hostilities on social media.

Oleg Smolin said he “was shocked” when the attack started and “was convinced that military force should be used in politics only as a last resort.” His fellow lawmaker Mikhail Matveyev said “the war must be immediately stopped” and that he voted for “Russia becoming a shield against the bombing of Donbas, not for the bombing of Kyiv.”

Russia’s state communications watchdog, Roskomnadzor, charged that reports about “Russian armed forces firing at Ukrainian cities and the death of civilians in Ukraine as a result of the actions of the Russian army, as well as materials in which the ongoing operation is called ‘an attack,’ ‘an invasion,’ or ‘a declaration of war’” were untrue and demanded that the outlets take them down or face steep fines and restrictions.

On Saturday, Russian internet users reported problems with accessing Facebook and Twitter, both of which have played a major role in amplifying dissent in Russia in recent years.

Stop the War message on Telegram from UPI

On Friday, daughter of Kremlin spokesman Dmitry Peskov, Elizaveta Peskova, posted a “stop the war” message on a Telegram verified account with more than 180,000 followers, which has since been taken down, according to CNN.

Russian tennis star Andrey Rublev performed a quiet protest on the court after his win on Friday, writing a simple message on the camera: “No war please” Later in a press conference the Moscow native expanded on his message, being incredibly selfless: “In these moments, you realize that my match is not important. It’s not about my match, how it affects me. What’s happening is much more terrible… You realize how important it is to have peace in the world and to respect each other no matter what, to be united. We should take care of our earth and of each other. This is the most important thing.”

Fellow Russian tennis star Daniil Medvedev also spoke out, saying:
“By being a tennis player, I want to promote peace all over the world. It’s just not easy to hear all this news. I’m all for peace.”

Alex Ovechkin, a Russian athlete from a different arena — literally, he’s a hockey star playing for the NHL‘s Washington Capitals — weighed in as well, saying: “Please, no more war. It doesn’t matter who is in the war — Russia, Ukraine, different countries — I think we live in a world, like, we have to live in peace and a great world.”

Meanwhile Russian chess grandmaster Yan Nepomniachtchi tweeted on Thursday: “History has seen many Black Thursdays. But today is blacker than the others. #нетвойне #saynotowar”

One thought on “Despite government crackdown, Russians continue to protest the war”