An article by Kenny Stancilde from Ecowatch

While Mexican President Andrés Manuel López Obrador has given farmers in the country a 2024 deadline to stop using glyphosate, The Guardian reported  Tuesday that agrochemical company Bayer, industry lobbyist CropLife America, and U.S. officials have been pressuring Mexico’s government to drop its proposed ban on the carcinogenic pesticide. 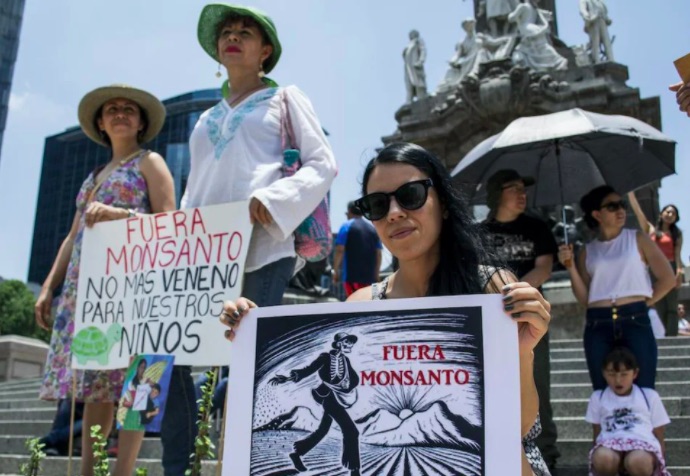 The corporate and U.S.-backed attempt to coerce Mexico into maintaining its glyphosate imports past 2024 has unfolded, as journalist Carey Gillam detailed in the newspaper, “over the last 18 months, a period in which Bayer was negotiating an $11 billion settlement of legal claims brought by people in the U.S. who say they developed non-Hodgkin lymphoma due to exposure” to glyphosate-based products, such as Roundup.

Roundup, one of the world’s mostly widely-used herbicides, was created by Monsanto which was acquired by Bayer in 2018.

According to The Guardian, which obtained internal documents via a Freedom of Information Act request by the Center for Biological Diversity (CBD), “The pressure on
Mexico is similar to actions  Bayer and chemical industry lobbyists took to kill a glyphosate ban planned by Thailand in 2019. Thailand officials had also cited concerns for public health in seeking to ban the weed killer, but reversed course after U.S. threats about trade disruption.”

In addition to instructing Mexico’s farmers to stop using glyphosate by 2024, the López Obrador administration on Dec. 31, 2020 issued a “final decree” calling for “a phase-out  of the planting and consumption of genetically engineered corn, which farmers often spray with glyphosate, a practice that often leaves residues of the pesticide in finished food products,” the news outlet noted.

The Mexican government has characterized  the restrictions as an effort to improve the nation’s “food security and sovereignty” and to protect its wealth of biological as well as cultural diversity and farming communities.

Mexico’s promotion of human and environmental health, however, “has triggered fear in the United States for the health of agricultural exports, especially Bayer’s glyphosate products,” Gillam wrote.