An article from NDTV

A 22-year-old climate activist from Bengaluru, Disha Ravi, was the first person to be arrested by the Delhi Police in the case involving “Toolkit” tweeted earlier this month by Swedish teen activist Greta Thunberg to show support for protesting farmers. The police — which earlier said “Toolkit” was a Khalistani conspiracy — have accused her of being a key conspirator in the document’s formulation and dissemination and alleged that she is trying to revive a Khalistani group. 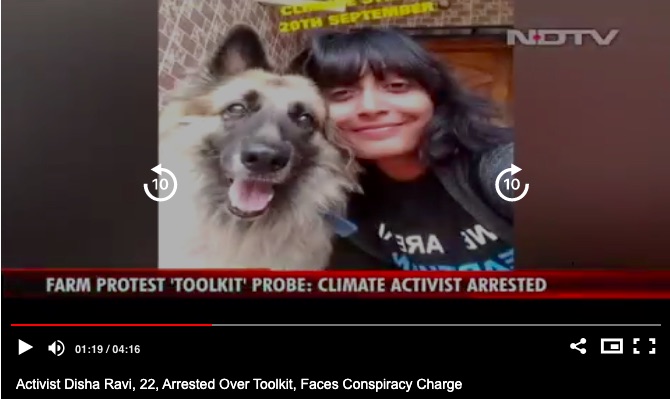 “I did not make Toolkit. We wanted to support the farmers. I edited two lines on February 3,” Disha Ravi told the Delhi court where she was produced earlier on Sunday. She wasn’t accompanied by any lawyer and spoke in the court for herself. The court has sent her to police custody for five days for further questioning. Several opposition parties and activists have condemned the arrest.

Here are the Top 10 points in this big story:

* “Disha Ravi is an Editor of the Toolkit Google Doc & key conspirator in document’s formulation & dissemination,” the Delhi Police tweeted, adding that she started a WhatsApp Group and collaborated to make the Toolkit doc. “In this process, they all collaborated with pro Khalistani Poetic Justice Foundation to spread disaffection against the Indian State,” the police tweeted.

* “She was the one who shared the Toolkit Doc with Greta Thunberg. Later, she asked Greta to remove the main Doc after its incriminating details accidentally got into public domain. This is many times more than the 2 lines editing that she claims,” another tweet by the Delhi Police read.

* “Completely atrocious! This is unwarranted harassment and intimidation. I express my full solidarity with Disha Ravi,” tweeted Congress’s Jairam Ramesh.

* “Some serious charges applied against a 21 year old for sharing a ‘dangerous’ toolkit. As per BJP our nation is so weak that a written document about farmer agitation shared by an international celebrity will lead to its ‘breakup’ The nation is much stronger than this toolkit, BJP,” tweeted Shiv Sena’s Priyanka Chaturvedi.

* “Modi regime thinks by arresting a grand daughter of farmers, under Sedition, it can weaken the farmers’ struggles. In fact, it will awaken the youth of the country and strengthen the struggles for democracy, tweeted CPM’s Sitaram Yechury.

* “The question is when will those people be arrested who continue to issue a literal ‘toolkit’ to break the national and social unity of India morning and evening, giving rise to hatred and division among the masses,” Samajwadi Party chief Akhilesh Yadav posted in Hindi.

* The 22-year-old is a graduate of Mount Carmel College, one of Bengaluru’s top women’s colleges. The Delhi Police, which arrested Disha Ravi on Saturday evening, claimed she is influenced by terrorists like Gurpatwant Singh Pannu and Khalistani groups like Poetic Justice. Thousands of others are involved in the conspiracy and further investigation into the matter is in progress, the police said.

* According to the Delhi police, incidents similar to what was stated in the toolkit took place on the Republic Day, The police also claims that the Toolkit was made by M O Dhaliwal of Poetic Justice Foundation, which is a Khalistani organization. The Delhi Police called the toolkit a part of conspiracy against the Government of India and filed a case of sedition against its creators.

* On February 3, Greta Thunberg had tweeted the “toolkit” to show support for the farmers’ protest against the Centre’s farm laws that has been in progress at the borders of Delhi since November 26.  She later deleted the tweet, posting an updated one.

* The Delhi Police had asked Google and some social media platforms for help with the investigation. The police had sought email ids, URLs and social media accounts related to the creators of “toolkit”. Later, the Centre asked Twitter to remove 1,178 accounts, which it said were spreading misinformation and provocative content on the farmers’ agitation.