An article from Russian television

Tens of thousands of farmers descended on the Indian capital and stormed the city’s iconic Red Fort complex in protest at new agricultural reforms which could imperil the livelihoods of hundreds of millions of citizens (See CPNN December 12, 2020). Protesters cheer after overturning a trailer during a tractor rally to protest against farm laws near New Delhi on Tuesday. © REUTERS/Anushree Fadnavis

Farmers mounted on horseback or driving tractors waved flags and brandished tools and swords as they breached police barricades and made their way to the heart of New Delhi.

Media reports  indicate that internet services have been suspended in parts of the capital at the behest of the government and law enforcement, which is struggling to bring the situation under control.

Internet services have also been suspended by the Ministry of Home Affairs (MHA) at the Singhu border near Delhi, where thousands of farmers have made their camp for the past two months.

Several splinter groups of protesters commandeered cranes and used tractors and ropes to breach police barricades on India’s Republic Day, which marks the country’s adoption of its constitution in 1950.

Riot police fired tear gas but were greatly outnumbered and eventually had to fall back, such were the overwhelming numbers of irate farmers and agricultural workers who eventually stormed the country’s historic Red Fort complex. 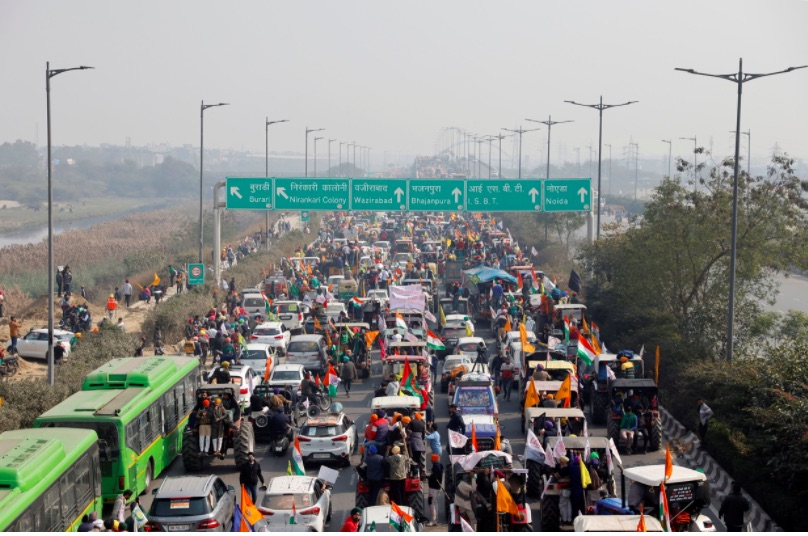 Prime Minister Narendra Modi regularly addresses the nation from the walls of the Red Fort, highlighting its cultural significance.

“Modi will hear us now, he will have to hear us now,” said Sukhdev Singh, 55, a farmer from the northern state of Punjab.

Tens of millions of smaller producers feel the new government regulations undermine their position in the market and afford more power to larger, private buyers, threatening to upend a vast swath of the country’s economy.

Nine rounds of talks with farmers’ unions failed to end the protests and, though the government offered to delay the new legislation for 18 months, the farmers demanded a full repeal.

The official number of arrests and injuries has yet to be released but state TV showed images of multiple bloodied protesters.

Somewhere in the region of half of India’s 1.3 billion population are employed in the agricultural sector, underscoring what’s at stake and why the protests were so furious as they swept through the capital.

Leaders of the march have denounced outlier groups that splintered off from the main protest.