An appeal from Unfold Zero

The following appeal to cities, parliaments and governments globally was launched on the International Day for the Total Elimination of Nuclear Weapons, September 26, 2020, as one of the actions of #WeThePeoples2020. 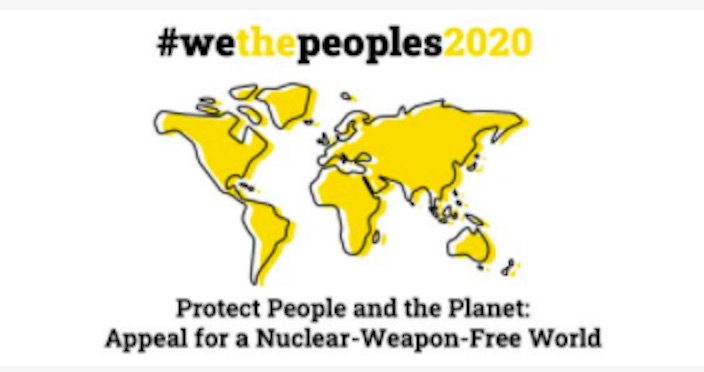 The Appeal will be presented to various forums including the UN General Assembly, Non-Proliferation Treaty Review Conference and Inter-Parliamentary Union Assembly, as well as to national parliaments and civil society events..

The nuclear weapons possessed by nine countries threaten us all. Any use of these weapons by accident, miscalculation or malicious intent, would have catastrophic human, economic and environmental consequences. The use of just a small fraction of the 14,000 nuclear weapons in the world’s stockpiles could end civilization as we know it.

In addition, the $100 billion spent annually on nuclear weapons is sorely needed for environmental, economic and human needs, including addressing the COVID-19 pandemic, protecting the climate and implementing the Sustainable Development Goals.

We, the undersigned, call on our cities, parliaments and governments to:

1. Affirm that nuclear war cannot be won and must never be fought, and therefore the nuclear armed States should stand down their nuclear forces and affirm policies never to initiate a nuclear war (no-first-use policies);

2. Commit to the elimination of nuclear weapons by 2045, the 100th anniversary of the United Nations;

3. Cut nuclear weapons budgets (if they are a nuclear-weapon State), end investments in the nuclear weapons industry (all governments), and redirect these investments and budgets to support the United Nations, COVID-19 management and recovery, drastic reductions in carbon emissions to protect the climate, and financing the achievement of the Sustainable Development Goals.