As documented extensively by Google Docs, a huge number of Russian citizens are against the Russian invasion of Ukraine. Many express their position through open letters and appeals or simply publications on social media.

However, as described by Reporters Without Borders and reprinted in CPNN, the Putin administration has banned the words “war,” “attack” and “invasion” from the media. Only information from “official Russian sources” – the defence ministry – is now permitted. Information about military losses or troop moral had already been classified  since October. Any attempt to provide such coverage is liable to result in prosecution or inclusion on the “foreign agents” list. 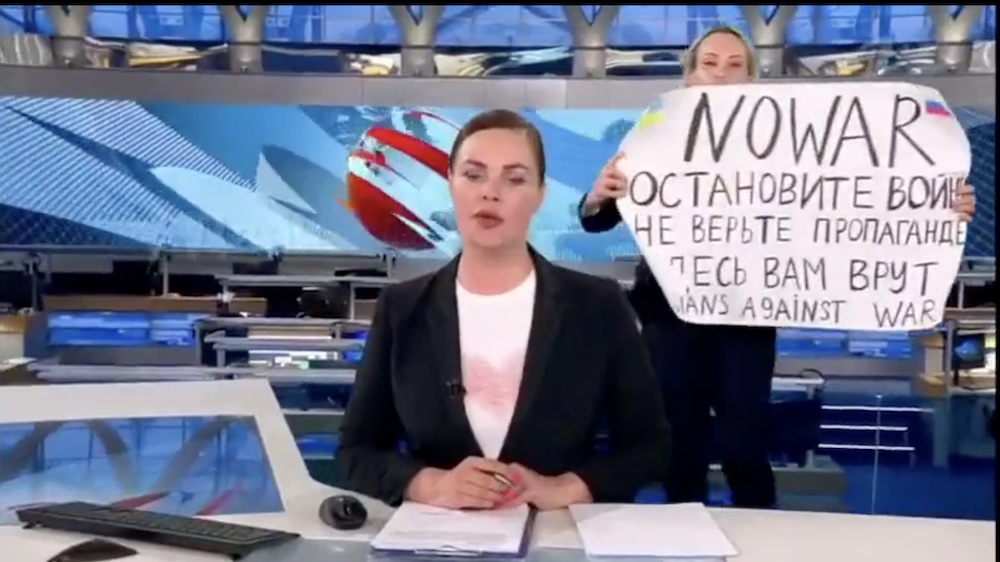 Marina Ovsyannikova interrupts a live news bulletin on Russian state TV Channel One holding a sign reading ‘NO WAR. Stop the war’ in this still image obtained from the video uploaded on March 14

According to public opinion polls as cited by the blogger Sergey Aleksashenko, between 58% and 65% of Russians continue to support the war as of March 6. Aleksashenko cites three explanations: 1) Putin is on the television everyday with his version of events; 2) most Russians get their news from television; and 3) independent media have been severely censured or closed.
(Continued in right column)

Not completely. After all, television is controlled by people, not just machines, and people cannot always be controlled.

For example, as shown in the photo on the left, on March 14, an employee of Russian television Channel One named Marina Ovsyannikova interrupted the news broadcast by holding up a sign saying “NO WAR. Stop the war” and “Don’t believe the propaganda”.

It is estimated that at least a million television listeners saw the sign. Also, the video was recorded and put on line by Kira Yarmysh, spokeswoman for jailed opposition leader Alexey Navalny, and it quickly notched up more than 2.6 million views. Tass news agency said Ovsyannikova may face charges under a law against discrediting the armed forces, citing a law enforcement source.

The event was heavily covered in the Western media, for example by Al Jazeera, the Guardian, the New York Times, le Monde and the Intercept.

Second question: Will Russians continue to get their news from Russian television?

If history repeats itself, Russians will increasingly turn to Western sources of information even though Putin’s administration tries to block access to them. At the end of the Cold War, when Russian media was heavily censored, Radio Free Europe became the main source of information for millions of Russians. The more the goverrnment tried to block Radio Free Europe, the more it became a game for Russians to get its information.

In the end, people are curious and the game will probably win out.