Dear friends! I am delighted to bring greetings from Kyiv, from the Ukrainian Peace Movement, to the Congress of the French Peace Movement. I wish you success in your initiatives to actively defend peace in Ukraine, to promote diplomacy and to make the structural changes necessary to institutionalize and strengthen the culture of peace, to help different people to live together on a common planet as a great family and to manage conflict non-violently. 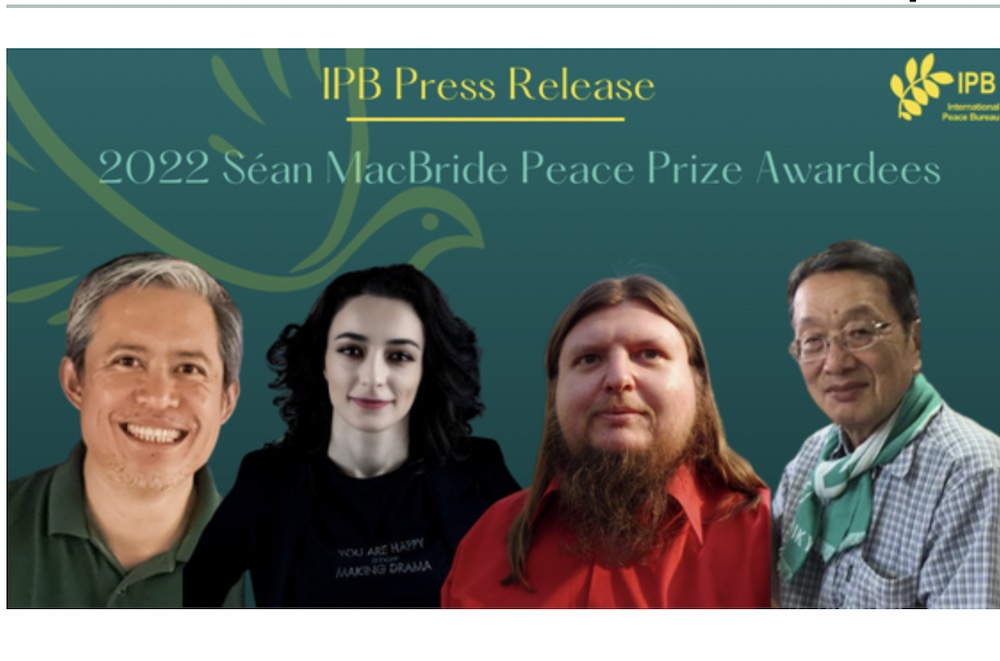 Winners of this year’s MacBride Peace Prize. Yurii Sheliazhenko is third from the left.

The Ukrainian Peace Movement has adopted a strategic statement entitled “Peace Agenda for Ukraine and the World“, which says that we consider as the goals of our peace movement and all peace movements in the world to uphold the right of conscientious objection to military service, to end the war in Ukraine and all wars in the world by peaceful means, and to secure lasting peace and development for all peoples of the planet. To achieve these goals, we must speak the truth about the evil and deception of war, learn and teach practical knowledge about peaceful living without violence or with its minimization, and we will help the needy, especially those affected by wars and unjust coercion to support the military or participate in war. This is our vision for the long-term strategy of the peace movement, and I hope this vision will be useful to you.

Peace movements need a long-term strategy because warmongers have long-term strategies. Military production complexes generate insane profits, and their media successfully turn militant populists into glorious heroes blaming all problems on the foreign enemy. Ruling elites are content with war being mass murder organized by governments that have failed to resolve their differences peacefully.

Too rarely do we hear responsible voices calling for a diplomatic solution, and I’m glad to see President Macron among those voices, but many who speak for peace are still bound by an old misconception that diplomacy is no substitute but completes the war machine. And this old misconception disempowers civil society by allowing militarists to hijack the political agenda, while evading democratic accountability. The military-industrial complex devours in obscurity the lion’s share of public finances, now intentionally inflated to feed beasts of war. If they position themselves as defenders of the people, can they defend us from poverty, food and energy shortages? Will they defend us from climate change with a nuclear winter and kill all life on the planet? For these defenders, the first enemy is a peaceful citizen who does not believe that war is a meaning of life and that the army must always be in command; they fight for power and defend those in power, not civilians abused by war. All war is a gross violation of human rights, and it starts by turning civilians into soldiers against their will.

Make no mistake: war profiteers and opportunistic warmongers don’t care about people’s suffering, they only care about their gains which increase as the conflict goes on, so they will perpetuate war for as long as possible. Their excuses are endless and miserable: the sanctity of the land which is supposed to cost human sacrifice; deep wrongs meant to make war right; etc But no war ever was, is, or will be inevitable, necessary, just, or beneficial, and if you think a war was or is an exception to that rule, you simply haven’t studied your war critically enough. Any war is beneficial for some and disastrous for many. War profiteers in Eastern and Western capitals have invested too much in the war, they intend to get the maximum in return without hesitation, ignoring the blood and tears of the civilian populations.

Ukraine, like France and all of Europe, is facing a harsh winter. My electricity is out almost all day, every day. Almost half of the energy infrastructure in Ukraine is in ruins, we have lost a large part of the GDP and the economy continues to shrink, tens of thousands of people are killed, some sources say that about a hundred thousands, millions have left the country. Russia continues its conquest of the Donbass, mercilessly bombarding the rest of Ukraine with hundreds of rockets, and the Ukrainian army takes a counter-offensive position in the south after the recapture of Kherson.

(Click here for the French original of this article.)

To stop the war, we need a ceasefire and peace talks without preconditions. But President Putin refuses to negotiate peace without Ukraine recognizing Russian control over Crimea, Donetsk, Luhansk, Zaporizhya and Kherson regions while President Zelensky refuses to negotiate peace unless Russia withdraws its troops from Ukraine, agree to pay reparations for Ukrainian losses and try Putin for a crime of aggression. When Zelensky rushed to accuse Russia of attacking Poland with a missile after a tragic accident with a Ukrainian anti-missile, he tried to engage NATO on the battlefield on the Ukrainian side, as he had already done in calling for the enforcement of a no-fly zone. It’s not just his own radicalism, it’s the policy of his administration’s hawkish American advisers who dream of replacing the United Nations with the NATO at the Cost of a Third World War. His speech at the G20 summit, where he insisted that Russia must be punished, not negotiated with, was ridiculously turned into good peace formula. If you have any doubts about whether this is a call for peace or not, just look at the Kyiv Security Pact announced in Zelensky’s speech, written by officials in his office making teams with the same warmongering American advisers: this document indicates that Ukraine will need military assistance from the EU and NATO which must fight Russia for several decades, and all adult Ukrainian civilians must be transformed into soldiers. Imagine war in Europe in the next ten, twenty, thirty years and more hysterical calls for the production of guns instead of butter. It’s a very serious and sinister plan, and it’s already in the works. Ukrainian youth are forbidden to cross the border, even to study in European universities, and the courts impose prison sentences on conscientious objectors to military service, trampling on the fundamental value of human rights while Zelensky hypocritically makes himself the heroic defender of Western values, turning Eastern Europe into the Middle East.

I know that the French peace movement discusses ways to stop the war. The world peace conference is a good idea, and the United Nations should play a role. But diplomats are used to being messengers of war, to change you have to change the system. The more peace institutions the better; it might be useful to create a ministry of peace. But nothing can replace the leading role of civil society and citizen diplomacy. Only the voices of the people, streets full of anti-war slogans could make it clear that humanity will not tolerate militarized economy, politics and culture. We must demand deep reforms towards non-violent governance here and now. Calls for scrapping guns, disbanding armies and turning military bases into homeless hostels and art galleries should be heard everywhere, on either side of the front line, so that no sane person can accuse peace-loving people of “treason”.

The solidarity of the peace movement in all corners of the planet is crucial, and we, the Ukrainian peace movement, are proud to have friends in the Russian and Belarusian peace movements, calling for peace together in different international forums. It is a time for solidarity between people who speak peace in different languages, who pray or think about peace with different beliefs and worldviews, who seek, teach and experience peace in different academic disciplines, who work for peace in multiple professions, — but not professional killers, let’s be clear, — all the billions of members of the human family suffering from endless wars must contribute to the cause of peace, and the sooner their conscience will be awake, the better. One day, eight billion people will cry “peace” so loudly that the war profiteers will have to walk away, and the time will come to admit and right wrongs, find reconciliation, and enjoy lasting peace on Earth. In conclusion, I reiterate a century-old truth: war is a crime against humanity, therefore, we must be determined not to support any kind of war and to fight for the elimination of all causes of war. .

The war system exists by popular consent. How long could armies continue to shed blood without popular support, in the face of fiscal resistance, strikes and streets full of anti-war demonstrations? If everyone refuses to kill, no war will be possible. We can and must eliminate the causes of war, which are not demonic enemies but ignorance and overinvestment in stupid militarism. No war could last forever. In November 1918, the first world war ended, and it was too long and devastating because of the stubborn pursuit of victories, but people had hope for the end of the war, and the hope came true , then wars were prohibited by international law. It’s time to make the law work. Let’s hope and act non-violently to end the war in Ukraine! Because, as the Ukrainian poet Ivan Franko wrote during the First World War: ,The pure sky is proudly azure, when the bloodshed of inhuman war has ceased, And the peace endures.