An article from Meduza

The Council of Wives and Mothers is a grassroots organization uniting women whose family members serve in the Russian military. Its leaders were understandably surprised when they heard about the President Putin’s planned meeting with several military mothers; not a single member of their group was invited. 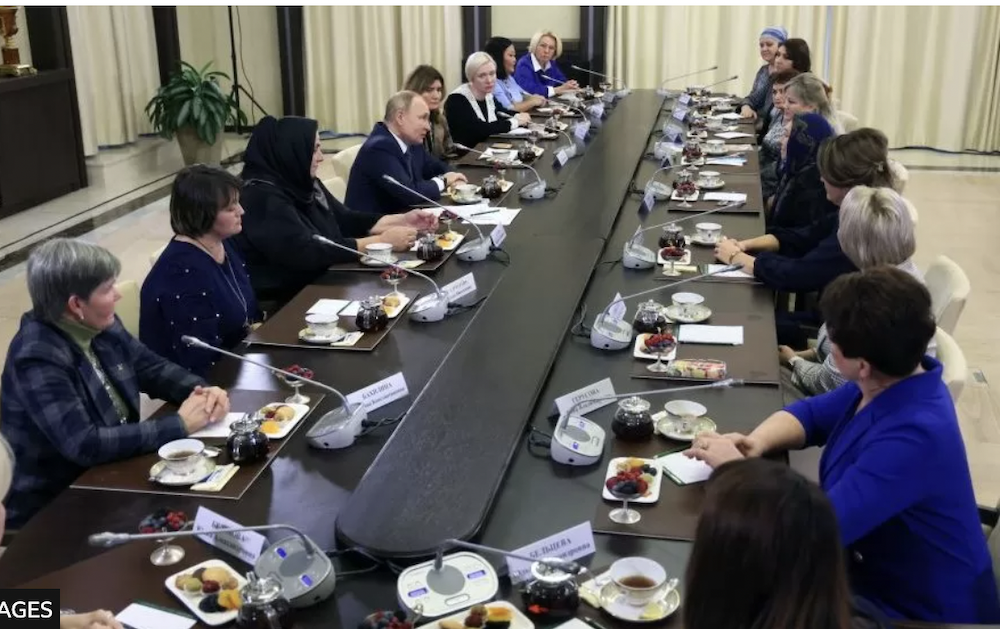 photo of meeting from BBC

Council organizer Olga Tsukanova responded with video where she insists that the president should meet with “real mothers,” as opposed to the “tame” women Kremlin bureaucrats “hand-picked” for the occasion:

Vladimir Vladimirovich, are you a man or what? Do you have enough courage to look into our eyes — openly, in a meeting with women who weren’t hand-picked for you. Women who aren’t in your pocket, but real mothers who have traveled here from different cities at their own expense to meet with you? We are here, in Moscow, and we are ready to meet with you. We expect an answer from you! Are you going to keep hiding from us? We have men in the Defense Ministry, in the Military Prosecutor’s Office, in the Presidential Administration — it’s all men, including the president. And mothers are on the other side of the divide. Well, are you all going to come out for some dialogue — or will you just stay in hiding?

On November 22, citing Kremlin sources, the Russian newspaper Vedomosti reported that Putin will meet with a group of military mothers on November 27, when Russia celebrates Mother’s Day. One of the sources said that Putin plans to discuss combat operations. When asked to confirm this information, Kremlin Press Secretary Dmitry Peskov confirmed the report.

Valentina Melnikova, the secretary of the Union of Mothers’ Councils, told the Russian publication Verstka that no one at her advocacy organization has been invited to the meeting with the president. “If they invite us, we’ll think about it. What are we to talk about with Putin? We’re a peacemaking organization,” she said.

An unnamed Kremlin source told Verstka that the authorities are now considering the possible creation of an alternative, state-sponsored “patriotic” military mothers’ movement. This information is still unverified, however.

Since late October, soldiers’ family members in 15 regions across Russia have staged protests demanding the return of their loved ones from Ukraine and humane treatment for the soldiers while they’re in the army.

(Editor’s note: Meduza was one of the independent media in Russia that published accounts of opposition to the war in Ukraine when it was started. As a result they were shut down in Russia and have had to reopen abroad, as shown by their internet domain of “Indian ocean.” Among other articles recently in Meduza are More than 90,000 Russian troops lost in war and Russians are tired of the war.)