U.S. House Democrats on Friday shared their “grave and urgent concerns” to leading social media companies over right-wing misinformation about this weekend’s Chilean constitutional plebiscite being shared on their platforms. 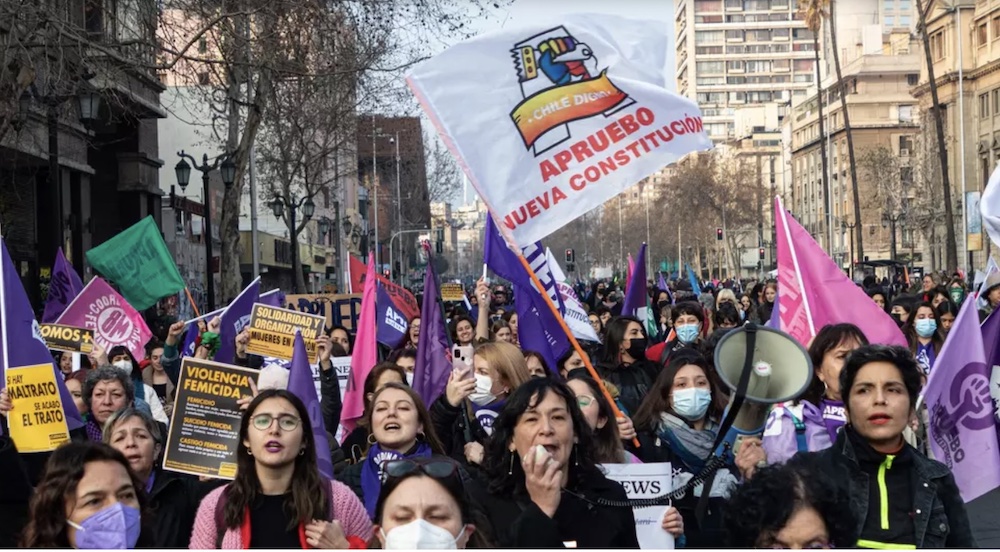 Thousands of people take part in a closing rally for the “I approve” option to change the Chilean constitution in Santiago on September 1, 2022. (Photo: Lucas Aguayo Araos/Anadolu Agency via Getty Images)

“This Sunday, Chileans will decide whether to approve a new constitution or default to the existing version written by the Pinochet dictatorship’s military junta,” states the letter, which is signed by Reps. Andy Levin (D-Mich.), Cori Bush (D-Mo.), Jesús “Chuy” García, Carolyn Maloney (D-N.Y.), and James McGovern (D-Mass).

Is the media an arm of the culture of war?

The lawmakers were referring to the dictatorship of Augusto Pinochet, who seized power in a 1973 coup supported by then-President Richard Nixon and successive administrations as well as  U.S. business interests.

“In the context of such an important and sensitive democratic process, we believe that technology corporations like yours have an obligation to ensure that their platforms do not serve to disseminate hate, lies, and disinformation across the electorate,” the letter continues. “Yet just this week Reuters reported that inaccurate information about Chile’s new constitution is widespread.”

As Common Dreams noted  Wednesday, a far-right misinformation campaign—replete with lies that the new constitution would change Chile’s flag, national anthem, and even the country’s name—could imperil its approval.

The lawmakers’ letter laments that “thousands of Twitter profiles regularly circulate patently false claims regarding the new constitution” in “an attempt to delegitimize and discredit” the proposed document.

“Even more troubling, these attacks often use hate speech to target women and Indigenous leaders,” the Democrats noted.

“We urge you to act swiftly against the spread of disinformation,” they added. “Continued inaction could abet interference in this historic referendum.”