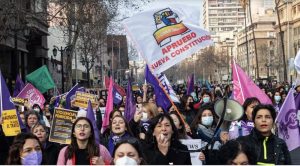 The state retains a monopoly on certain actions of the culture of war, such as the right to kill.

Hence, for example, it was primarily the wealthy class in Chile and their international capitalist allies that was apparently behind the dis-information campaign that defeated the referendum for a new and progressive constitution in Chile.