An article from Page 3 (translation by CPNN)

From 5 to On September 11, the “First Festival of the Heroines of Independence” will be held in the City of Oaxaca. It will contribute to the construction of a culture of peace by recognizing the women who, with their effort, courage and even with their lives, have contributed to the foundation of our country.

Music, theater, history, cinema, poetry and gastronomy will serve as vehicles to pay tribute and make visible the women who have been systematically erased from the history of Mexico. 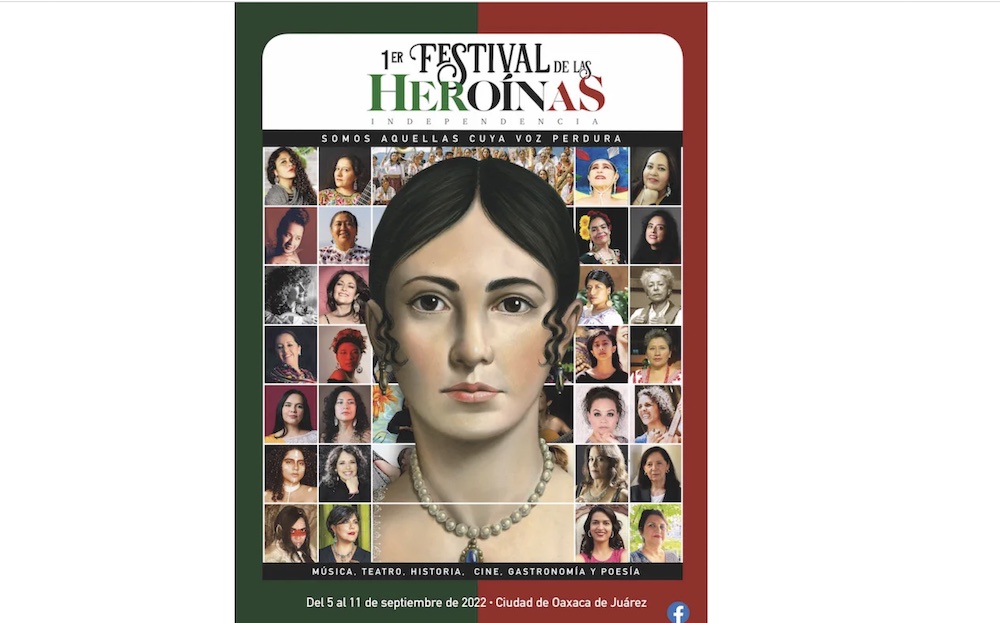 At a press conference to publicize this Festival, the general director of the “Las Heroínas” Collective, Martha Toledo Mar, explained that the idea of ​​the project arose as a result of the Bicentennial Celebration of the Independence of Mexico, which only gave tribute to heroic men.

“There we realized that there was a deep historical void in the psyche of the Mexican people; It is not that those who write the history books forgot, it is not something free, it is on purpose, it is a matter of the system, of the patriarchy, ”she remarked.

This Festival, said Toledo Mar, seeks to recognize all those women with names and surnames. She mentioned that there is a record of more than 50 women who fought for independence, however, the majority of the population only remembers two: Doña Josefa Ortiz de Domínguez and Leona Vicario.

“We believe that for a culture of peace to exist, it is necessary to recognize and give the place that corresponds to each of these women and thus reduce the historical debt. We firmly believe that what is not named, does not exist”, underlined Martha Toledo Mar. And she added that precisely for this reason, on this occasion the Festival will pay tribute in life to the historian, researcher and activist Margarita Dalton.

In a subsequent interview, the co-director of the Consortium for Parliamentary Dialogue and Equity, Yésica Sánchez Maya, stressed that it is essential for this organization to continue to influence the visibility of all the contributions of women in all structures of society; hence, she pointed out, the importance of this artistic project by Martha Toledo Mar.

“This festival seemed like a fundamental proposal to us because historically we have been unrecognized, always made invisible. This exercise of women for women is a long-term commitment to the construction of peace that seeks to generate new ways of recognizing and dignifying, through the arts, singing and creativity, to those women who were not recognized at the time,” he said.

In this sense, Sánchez Maya welcomed the support of the municipality of Oaxaca de Juárez for making available public spaces where some of the activities will take place. This will make art and culture more accessible for Oaxacans.

For her part, Rocío Morales, singer-songwriter and cultural manager added: “telling a story in a song is a challenge. This is documented in the book Addicted to the Insurgency by Celia Palacios which makes known and honors the women whom history does not mention.

Similarly, Jade Midori, an Oaxacan plastic artist, remarked: “I think it is very important to make women visible within social movements, not only on commemorative historical dates such as Independence, but also within historical and contemporary social struggles.”

The women to be honored by artists are:

Toledo Mar explained that through her music, the participants will honor:

As part of this Festival, two plays will also be developed at the “Juárez” Theater by the Compañía Nacional de Teatro Novohispano and the Compañía de Teatro “Lola Bravo”, in addition to 3 conferences by historians Margarita Dalton, Rebeca Orozco and Celia del Palacio; a round table, four projections of historical films and the presentation of three commemorative murals. Poetry readings, literary gatherings and themed dinners are also planned.

The “Las heroínas” Collective is made up of the Zapotec singer-songwriter and priestess Rocío Morales, the decimist and former Goddess Centéotl, Evelin Acosta, the singer and cultural manager Nohemí Mondragón, and the singer-songwriter and composer Anastasia Sonaranda.
It also includes the composer and visual artist José Luis Guzmán Wolffer, the playwright and actor Francisco Hernández, the marketer and activist Lalo Lara and the coordinator of the Institutional Program for the Culture of Peace of the Autonomous University “Benito Juárez” of Oaxaca (UABJO), Leticia Cruz Lopez.