Article composed of excerpts from 4 facebook pages as indicated

The National Youth Commission, through its Chairperson and CEO USec. Ronald Cardema and Commissioner representing Mindanao ASec. Alexa Dayanghirang, witnessed another milestone of the youth during the launching of NAP-YPS at the PICC on August 30, 2022.

The NAP-YPS is a 10-year plan that details key action points strengthening the meaningful participation of young people in peacebuilding, governance, protection of human rights, and the implementation of global and national sustainable development agenda.

It is also the first youth-led and multi-stakeholder driven national policy on youth, peace, and security in the Philippines. 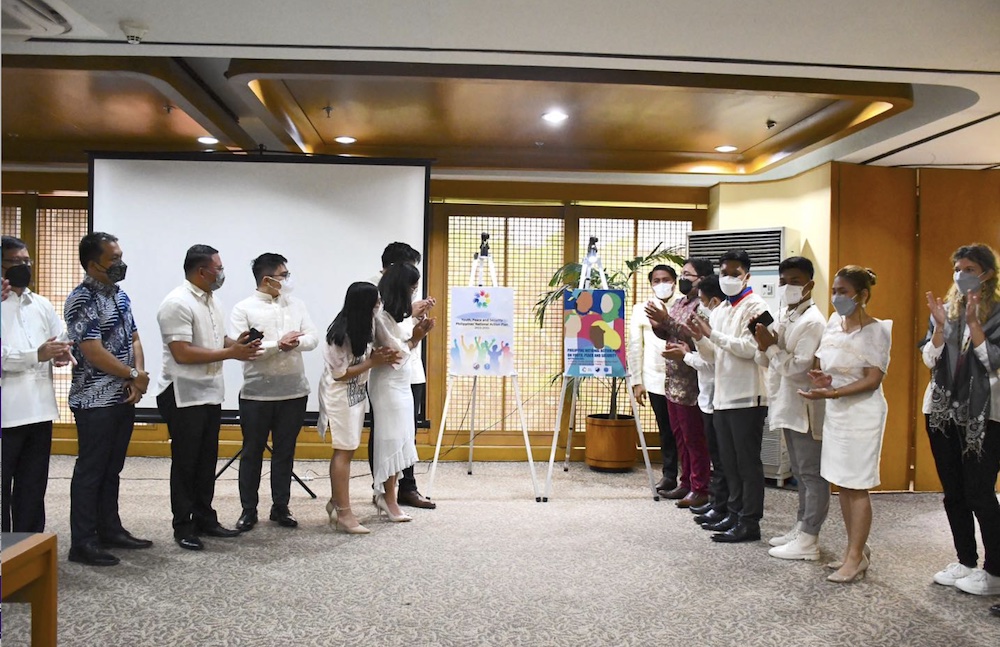 In his welcome remarks, Chairperson Cardema stressed the importance of NAP-YPS and expressed his support to the initiatives of the partner agencies, and the youth in building the future of the country. Commissioner Dayanghirang also also delivered her message of support as the Commissioner representing Mindanao and likewise expressed her gratitude to the partners in making the launch possible.

Youth contributors and representatives from partner agencies were also present to witness the launching.

Here’s to youth as our partners in nation-building!

Yesterday, August 30, the Philippines launched its National Action Plan on Youth, Peace and Security (NAPYPS). It is the 1st in Asia and the 4th in the world.

This NAP was written BY YOUNG PEOPLE. Their draft was circulated to a multi-stakeholders group, where academic institutions, CSOs, and national government agencies were able to contribute. On its last and final editing, government agencies such as DILG, DepEd, PCW, NYC, OPAPRU, JJWC, TESDA partnered with the editors to finalize their respective pillars.

Yesterday, 5 of the core writers presented a summary of the contents of the NAP. Carmela Francesca Adelantar spoke about the challenge she had in the protection pillar – to grasp and represent the myriad of challenges of Filipino youth in armed conflict. Brian Delos Santos shared a story from his context in Masbate and the importance of moving away from treating young people as beneficiaries to actually considering them true and equal partners. Abdulrahman shared his insights as a young leader and public servant from Tawi Tawi and the importance of supporting young people’s work in peace all the way. I didn’t know Jawi-Jawi means ‘far far or a far place’ Samuel C. Madriaga shared about how meaningful and youth responsive DDR – that includes provision for entrepreneurship opportunities should be put in place to help young combatants and those affected by armed conflict reintegrate into society fully. Lastly Dan represented the Sangguniang Kabataan (SK) one of the most unique youth government structures in the world, and how the SK could be maximized to play a big role in YPS. He has been setting this example!

Hearing these young people speak and share yesterday, gave me the full circle of my own journey as a trainer and facilitator in youth and peacebuilding. When I decided to come back to the Philippines in 2017 after living and working abroad, I had one goal in mind – to share everything I learned to the Filipino youth, especially in Mindanao. Hearing my name mentioned by them during their speeches and sharing – as a mentor, as a facilitator, and to be remembered for the lines or phrases I shared in the past – made me feel so grateful and FULL.

I turn 40 next year, the age limit for youth in some countries, but sometimes I feel like I’m still 24 running around the UN back then with David Adams, lobbying permanent mission delegates to include young people in their statements. Back then, ‘to be mentioned’ was the first step and it was good enough. We followed speeches and highlighted mentions of youth that you can count with one finger! With Nick Martin and Helene Leneveu I remember how frustrated we were at some countries who ‘betrayed us’ and didn’t mention young people.

We’ve come a long way. What a meaningful journey!

Young people wrote this NAP, other stakeholders contributed to its final stages.

And I think it is time for me to let this sink in: ‘as the branch of the tree where the bird sits get older and eventually breaks, there’s no need to worry because the wings of this bird are strong enough and ready to fly’

Today, at Philippine International Convention Center (PICC) , we officially launched the Philippine National Action Plan on Youth, Peace and Security (NAPYPS), which represents a historic milestone by the youth #FortheFilipinoYouth

The Philippines is the 4th country in the WORLD to have a NAPYPS and the 1st in ASIA.

I am delighted that I have contributed to the advancement of our country, especially for the youth.

Being a core writer of this 10-year National Action Plan is a great legacy I will treasure forever.

During my speech, I emphasized that the youth must not be mere benefactors but partners in decision-making at the national and local levels.

Here is an excerpt from my speech:

More often than not, Filipino youth are seen as beneficiaries or mere participants of peacebuilding interventions that are supposed to be solutions to address their challenges. The partnership pillar suggests that more young people are given leadership roles alongside adults to increase ownership and sustainability of these interventions.

The outcome we want in the partnership pillar is that the Filipino youth are considered meaningful and trusted equal partners in the implementation of the whole-of-society and whole-of-nation approach to peace and security initiatives at the national and local levels.

It is, therefore, essential for the government, both the national and local, especially the Armed Forces of the Philippines and Philippine National Police, to value and consider the youth not as mere benefactors but as partners in development planning and decision-making processes. With the youth in the equation, peace may no longer be elusive.

Today, we celebrated the historic Ceremonial Launching of the Philippine’s National Action Plan on Youth, Peace, and Security (NAPYPS) at the PICC.

The NAPYPS is a significant platform for the Filipino youth to be involved in designing evidence-based solutions and formulating rights-based policies that could strengthen our advocacy of building safer spaces for all. Driven by its youth-centered campaign, this serves as an impetus for every Filipino youth to assert our collective narratives and power to contribute to the development of sustainable strategies and actions towards a just, peaceful, and genuinely progressive Philippines.

It was an honor for me to represent the Kabataang San Pableño and serve as one of NAPYPS’ core writers. Thank you so much to OPAPPRU, Ma’am Roxy Figueroa-Mallari, Ms. Meg Villanueva, and Kuya Aldren Hila for this opportunity. We’ll continue to stand and serve with our peace champions para sa kapayapaan, para sa kabataan at para sa Bayan! #NAPYS