“Politicians alone cannot encompass or face all the challenges that the world presents today. Politics needs interaction with civil society and the intellectual community. Consequently, dialogue is absolutely essential, a wide-ranging dialogue that helps us develop bold and feasible approaches to solve the challenges of our globalized world. The world needs a vision with the will and perseverance to make it a reality. We need to cultivate a new culture and push new approaches, because the world needs a culture of peace.”

This is how Mikhail Gorbachev opened the third meeting of the World Political Forum, held in Bosco Marengo, Italy, on July 8, 2002. At that time, the former president of the Soviet Union had already become one of the most important figures in history. 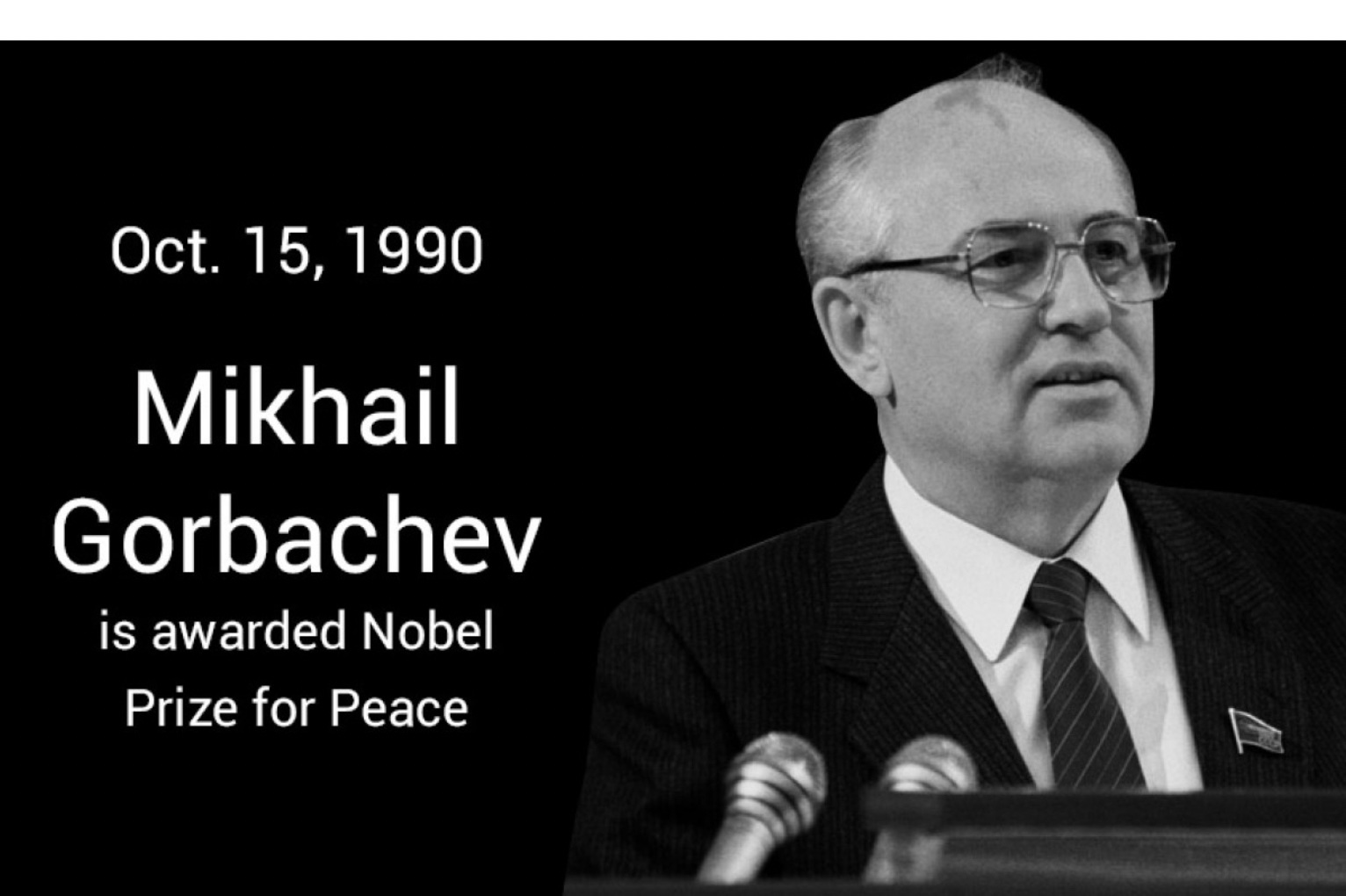 Once again, listening to him, I thought of the mistake made by Western leaders in not taking seriously the words of this man who had set the example, with extraordinary imagination and ability, by solving one of the most important challenges of the contemporary world without the use of weapons, without a single drop of blood. Obsessed with accounts and dividends, Western leaders look the other way. As a result they have led humanity to the current systemic crisis.

On December 15, 1984, Gorbachev arrived in London at the head of the Supreme Soviet delegation. It was the first visit by a Soviet delegation to Britain in some 15 years. His speech to the House of Commons was extraordinarily audacious: the nuclear age called for new “political thinking.” The danger of war was a reality; the cold war constituted an abnormal state of relations that propitiated the danger of warlike confrontation. In a nuclear war there could be no winners. No state can ensure its own security by threatening the security of others. In the limitation and elimination of armaments, and in particular in the case of nuclear weapons, the Soviet Union was prepared to go as far as its Western interlocutors wished…”. In his speech a phrase was especially remarkable: “Regardless of how much may separate us, we live on the same planet. Europe is our common home; a house, and not a battlefield.” It was clear already in 1984 that Mikhail Gorbachev was speaking in a different language.

On that occasion he unfolded a large map on which all the major nuclear arsenals were marked. “Each one of these small squares is enough to end any life on Earth… Thus, with the stocks accumulated in nuclear weapons we could annihilate our civilization a thousand times over.” His address to the British Parliament on December 18 had a great impact, both in the United Kingdom and in the United States.

In October 1986 the Issyk-Kul Forum met. Mikhail Gorbachev himself described it as follows: “In October 1986 an event had occurred that would have considerable importance in the years of perestroika. I am referring to the meeting at the ISSYK-KUL lake, which brought together leading artists from all over the world, including Arthur Miller, Alexander King, Alvin Toffler, Peter Ustinov, Zulfu Livanelly, Federico Mayor and Afework Teklé… Its initiator was the writer Chingiz Aitmatov. There was talk of nuclear danger, ecological catastrophes and the progressive lack of dignity, also in politics. My meeting with the participants of that Forum took place on October 20, a week after Reykjavík…”.

It was after the meeting by the Issyk-Kul lake, when that distinguished group of intellectuals and creators – to which must be added James Baldwin, Augusto Forti, Rustem Khairov, Yaser Kemal, Lisandro Otero and Claude Simon – had with the secretary overall an extraordinarily interesting meeting. I was entrusted with the presidency and it was a memorable occasion for me to be able to learn about the vision and approaches of people who spoke not only of freedom but of responsibility, and how we could better advise the secretary general of the Soviet Union so that he could carry out the transformations necessary. How could we collaborate to put perestroika into practice?

In order to better understand the context in which the first meeting of the Issyk-Kul Forum took place, I would like to highlight President Gorbachev’s statements at a press conference he gave on October 14, 1986 after the Reykjavik Summit. Gorbachev highlighted all the proposals made to President Reagan on the reduction and elimination of nuclear weapons, with effective verification; including total elimination by the Americans and the Soviets of “middle-range” missiles.…Gorbachev openly described that, at one point, a “real battle” had taken place between the two approaches on politics on a world scale – including the ending of the arms race and nuclear warheads … “I realized, indicated Mikhail Gorbachev, that the American president is a captive of the United States military-industrial complex”. This assertion is especially relevant and had already been made clear by President Eisenhower at the end of his term. “I think that the president of the United States and I have to reach an agreement on my next visit to Washington. Otherwise, a great historical opportunity will have been lost.”

In October 1989, Mikhail Gorbachev received the Nobel Peace Prize. He could not go to the corresponding ceremony in Oslo due to having to attend to very urgent responsibilities. For this reason, he delivered the “Nobel Lecture” in Oslo on June 5, 1991, in which he spoke at length and in depth about the need for peace to prevail over all other conditions. He expressed his confidence that solidarity and change had been accepted by the “whole world to face global challenges”.

How awesome! Who would have thought that it would be a politician from the Soviet Union who, with great imagination and skill, would be able to end the “Cold War” without a single casualty, placidly. while President Reagan spoke of “star wars”…?

Mikhail Gorbachev, very concerned about preserving the quality of human life, created in Geneva a “Green Cross International” whose objectives are the global challenges of security and the eradication of poverty and environmental degradation. President Gorbachev also founded “The World Political Forum.” He was accompanied by Andrei Grachev in the World Political Forum and by Alexander Likhotal in the Green Cross.

I want to mention the emotion that the event held in the great Albert Hall in London -full to the brim- produced in me on Gorbachev’s 80th birthday, in 2011. “The man who changed the world”, was in the center of a large arch in the immense Hall. I thought about the contrast between this man who had redirected so many erroneous tendencies, on the one hand, and the other impassive, short-sighted and irresponsible leaders, on the other hand, who are incapable of benefiting from such unexpected historical developments. And, in the midst of the applause, I thought of what Gorbachev had written in 1991: “The Berlin Wall collapsed because a system based on equality had forgotten freedom. Now, the alternative system will also collapse because, based on freedom, it has forgotten equality. And both have forgotten justice”.

On the first day of October 2016, from Moscow, he joined the “Disarmament for Development” campaign, sponsored by the Geneva International Peace Bureau, led by Ingeborg Breines and Colin Archer, in order to redirect 10% of the colossal daily investments in weapons and military spending. In Berlin, that symbolic city, many people marched for peace “unter den Linden”. Despite his express support and that of Pope Francis… the media paid no attention. But there have been many and in the future there will be many more who will be inspired by Gorbachev’s fabulous career. His imaginative and unexpected proposals have been and will continue to be very relevant guidance in my own daily behavior.

Gorbachev is a giant and luminous star. He gives us guidance for tomorrow. His legacy will remain as glimmers of hope for a future that has yet to be achieved.