An article by Philip Nyam in New Telegraph

The House of Representatives recently passed a resolution calling on the executive to immediately implement the “silence the guns” peace policy of the African Union (AU). PHILIP NYAM reviews the roadmap

Worried by growing conflicts and widespread insecurity across the continent, the African Union met in Lusaka, Zambia in 2016 and drew a master roadmap of practical steps to silence guns in Africa by the year 2020. Six years after, the implementation of the roadmap titled “Lusaka Master Roadmap 2016” has been beset by challenges and Nigeria, the biggest black nation on earth is yet to fully integrate the policy. 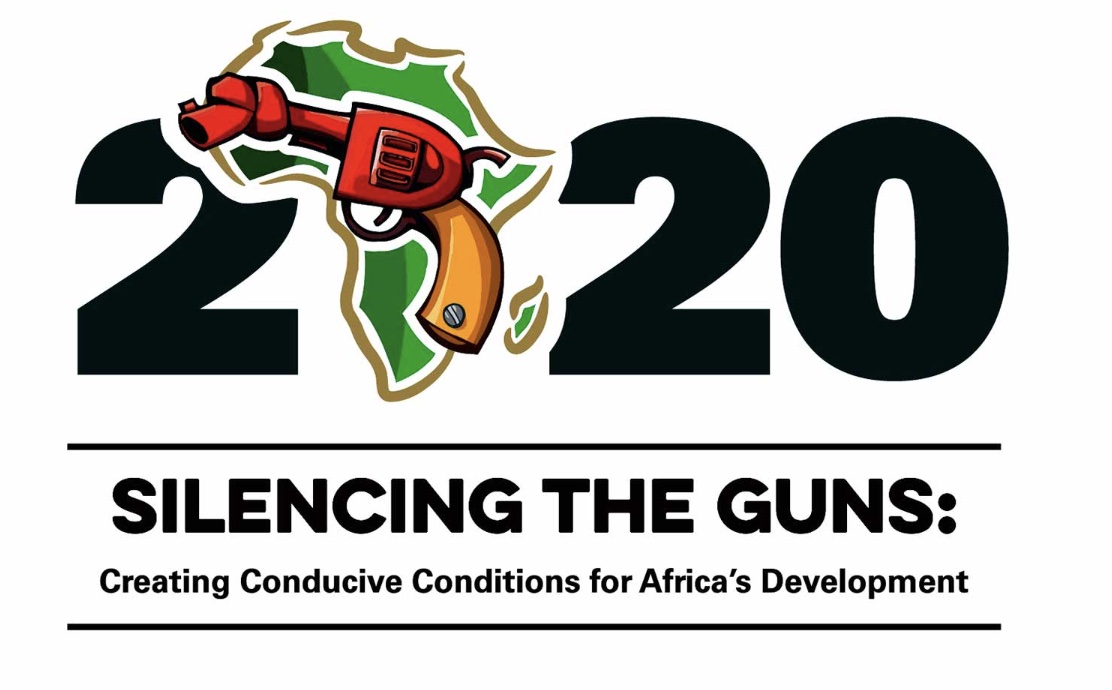 It was in view of this that the House of Representatives last month passed a resolution to impress on the government to speed up the process of its implementation. The House resolution came barely after the meeting of the African Union Commission in Lusaka, Zambia, between June 6 and 8 brought together participants from the relevant departments of the AU Commission, Divisions within the Political Affairs, Peace and Security Department, representatives from RECS/RMs, representatives of the African Union Mechanism for Police Cooperation (AFRIPOL), African Centre for the Study and Research on Terrorism (ACSRT) and Economic, Social and Cultural Council (ECOSOCC) and representatives of AUC partners supporting silencing the guns project such as the UN Department of Political and Peace-building Affairs.

The meeting finalised an implementation plan that will guide the operationalisation of the monitoring and evaluation (M&E) framework of the AU Master Roadmap Silencing the Guns AU and Regional Economic Communities converge to finalise the implementation plan and road map on practical steps to silence the guns in Africa. This is in addition to adopting the terms of reference of an AURECs/ RMs Steering Committee on Silencing the Guns. The meeting also agreed on the establishment of the Steering Committee including the relevant departments of the AUC and focal points/officers in each REC/RM to follow up and coordinate activities related to the STG Initiative.

It also served as a collaborative platform to facilitate regular exchanges between the AU, RECs/RMs, Civil Society Organisations, academia, the private sector and other stakeholders that have a role to play in the implementation of the Silencing the Guns Master Roadmap. Explaining why the implementation had to be postponed from 2020 to 2030, the Coordinator of Silencing the Guns under the Political Affairs, Peace and Security at the African Union Commission, Mr. Advelkader Araoua, said that “the extension of the life span of the AU master roadmap on practical steps to silence the guns in Africa to the year 2030, is a test of our ability to deliver on our commitments to free the African continent from wars, civil conflicts, humanitarian crises, human rights violations, gender-based violence, and genocide.” Also, the Head of Governance, Peace and Security at the COMESA Secretariat, Ms. Elizabeth Mutunga stressed the need to continuously assess the external environment in developing an implementation plan for the monitoring and evaluation.

“Emerging and unpredictable factors, that have not necessarily originated from our region are having a very big impact on the peace, conflict and security dynamics of our region,” she noted. The motion It was after the meeting that the House of Representatives passed a resolution pushing for the implementation of the roadmap. In a motion titled “Need to adopt and implement the “Silencing the Guns” Road Map, Hon. Ahmed Munir noted that “Silencing the Guns 2030” is a flagship roadmap project adopted in Lusaka, Zambia in 2016 by the African Union with the aim of realising a Conflict-Free Africa by the year 2030. He said that the concept of silencing the guns was borne out of the observation that the African Continent is the scene of numerous violent conflicts that make the desired economic and political integration of the continent difficult. As part of the AU’s Agenda 2063, the AU sought to ensure that Africa is characterised by peace, political tolerance and good governance.

Hon. Munir expressed concerns that initially, the roadmap was to be achieved by 2020 of which the continent fell short and the goal was further extended to 2030 “cognisant that peace and security matters across Africa are interwoven and the continent cannot afford to further miss the 2030 set target.” In adopting the motion, which was unanimously endorsed, the House urged the Ministry of Foreign Affairs to fully embrace the report and ensure relevant Ministries, Departments and Agencies (MDA’s) key into the roadmap. The lawmakers also urged the office of the National Security Adviser to fully adopt the report and cascade it down to other relevant security agencies.

Synopsis of the roadmap

The African Union Master Roadmap of practical steps to silence guns in Africa by the year 2020 better known as the Lusaka Master Roadmap 2016 entails the following. The continuing insecurity, instability, disruption of political harmony, erosion of social cohesion, destruction of the economic fabric and public despondency in various parts of Africa call on the Peace and Security Council (PSC) to play a locomotive role in spearheading strategic interventions to put this sad situation to an end.

Most crises and violent conflicts in Africa are being driven by poverty, economic hardships, violation or manipulation of constitutions, violation of human rights, exclusion, inequalities, marginalisation and mismanagement of Africa’s rich ethnic diversity, as well as relapses into the cycle of violence in some post-conflict settings and external interference in African affairs. Undoubtedly, these challenges can be overcome, as long as the correct remedies are idenpletified and applied.

It is in this context that the PSC convened a Retreat that was dedicated to the theme: Practical Steps to Silence the Guns in Africa by the Year 2020, from 7 to 9 November 2016, in Lusaka, Zambia. The Retreat regrouped the PSC Member States, representatives of the Economic, Social and Cultural Council (ECOSOCC), the AU Commission, Regional Economic Communities/ Regional Mechanisms for Conflict Prevention, Management and Resolution (RECs/RMs), Civil Society Organisations (CSOs), the Committee of Intelligence and Security Services of Africa (CISSA) and the Regional Centre on Small Arms (RECSA).

This was all the more urgent given the central thrust of Agenda 2063 and the overall AU Vision of building a peaceful, stable, secure, integrated and prosperous Africa, and the essence of Agenda 2030 on sustainable development goals. Notably, the 4th aspiration of Agenda 2063, which is the African Union’s strategic framework for socio-economic transformation of the continent over the next five decades, highlights the need for dialoguecentred conflict prevention, as well as the management and resolution of existing conflicts, with a view to silencing the guns in our Continent by the Year 2020. Agenda 2063 provides that in order to achieve sustainable conflict prevention and resolution, a culture of peace and tolerance must be cultivated and nurtured in our children and youth, among others, through peace education.

Furthermore, in its first 10 years implementation plan, Agenda 2063 stresses the imperative of ending all wars, civil conflicts, gender-based violence and violent conflicts and prevent genocide, as part of Africa’s collective efforts to silence the guns in the continent by the year 2020. In organising the retreat, the PSC was inspired and guided by the clarion call in the OAU/AU 50th Anniversary Solemn Declaration adopted by the AU Heads of State and Government in Addis Ababa on 26 May 2013, in which they, among other aspects, expressed their “determination to achieve the goal of a conflict-free Africa, to make peace a reality for all our people and to rid the continent of wars, civil conflicts, human rights violations, humanitarian disasters and violent conflicts, and to prevent genocide.”

The PSC’s resolutions further read: “We pledge not to bequeath the burden of conflicts to the next generation of Africans and undertake to end all wars in Africa by 2020. In this regard, we undertake to address the root causes of conflicts, including economic and social disparities; put an end to impunity by strengthening national and continental judicial institutions, and ensure accountability in line with our collective responsibility to the principle of non-indifference.

“We undertake to eradicate recurrent and address emerging sources of conflict including piracy, trafficking in narcotics and humans, all forms of extremism, armed rebellions, terrorism, transnational organized crime and new crimes such as cybercrime; push forward the agenda of conflict prevention, peace-making, peace support, national reconciliation and post-conflict reconstruction and development through the African Peace and Security Architecture; as well as, ensure enforcement of and compliance with peace agreements and build Africa’s peacekeeping and enforcement capacities through the African Standby Force.

“We will maintain a nuclear-free Africa and call for global nuclear disarmament, nonproliferation and peaceful uses of nuclear energy; ensure the effective implementation of agreements on landmines and the non-proliferation of small arms and light weapons; address the plight of internally displaced persons and refugees and eliminate the root causes of this phenomenon by fully implementing continental and universal frameworks.”

In conceiving practical steps to silence the guns in Africa by the year 2020, the PSC took into consideration the political history of the African continent, which has been marred particularly by three major tragedies, namely, slavery, colonization and the unpaid extraction/ exploitation of natural resources, which have created a huge burden for Africa and its people. The end of slavery at the end of the 19th century and the fall of colonialism under the weight of protracted nationalist and liberation struggles across the continent ushered in a new era in Africa.

However, the new era is faced with a myriad of challenges that the continent has not yet been able to successfully overcome. The cycle of violent conflicts and disruptive crises persist on the continent, so do situations of relapses back into the cycle of violence and destruction for some countries that were perceived to have already emerged from conflicts. It is therefore critically important for Africa and its people to put in place strategic guidelines for addressing these challenges.

In some instances, the African continent has also not been able to foster and manage effective political transitions, partly due to the fact that the erstwhile liberation movements have taken too long to transform themselves into dynamic governing political parties, which could more successfully adapt to operating in pluralistic democratic societies as agents of political discourse and crucial facilitators rather than act as a stumbling block to any democratic dispensation.

Similarly, failures to transform some of the military wings of some of the liberation movements into professional and disciplined national armies, which pledge loyalty to civilian government regardless of the political party in power, have brought problems to some parts of Africa. All of these facts have stifled serious attempts to silence the guns in Africa.

Yet, peace, security and socio-economic development should be pursued simultaneously. Equally challenging is the task of sustaining transitions from war to peace and to prevent relapses. This is why the AU PSC developed a Master Roadmap of realistic, practical, time-bound implementable steps to silence the guns in Africa by 2020.

The master Roadmap is premised on the principle that Africa should take, assume total responsibility for its destiny. Assuming such responsibility should also take into account the fact that, while appropriate decisions and programmes have been adopted with a view to resolving some of the challenges Africa is faced with, there has been encroachment on some of those decisions by the implementation deficit.