An article from the Stockholm International Peace Research Institute

13 June 2022. The Stockholm International Peace Research Institute (SIPRI) today launches the findings of SIPRI Yearbook 2022, which assesses the current state of armaments, disarmament and international security. A key finding is that despite a marginal decrease in the number of nuclear warheads in 2021, nuclear arsenals are expected to grow over the coming decade. 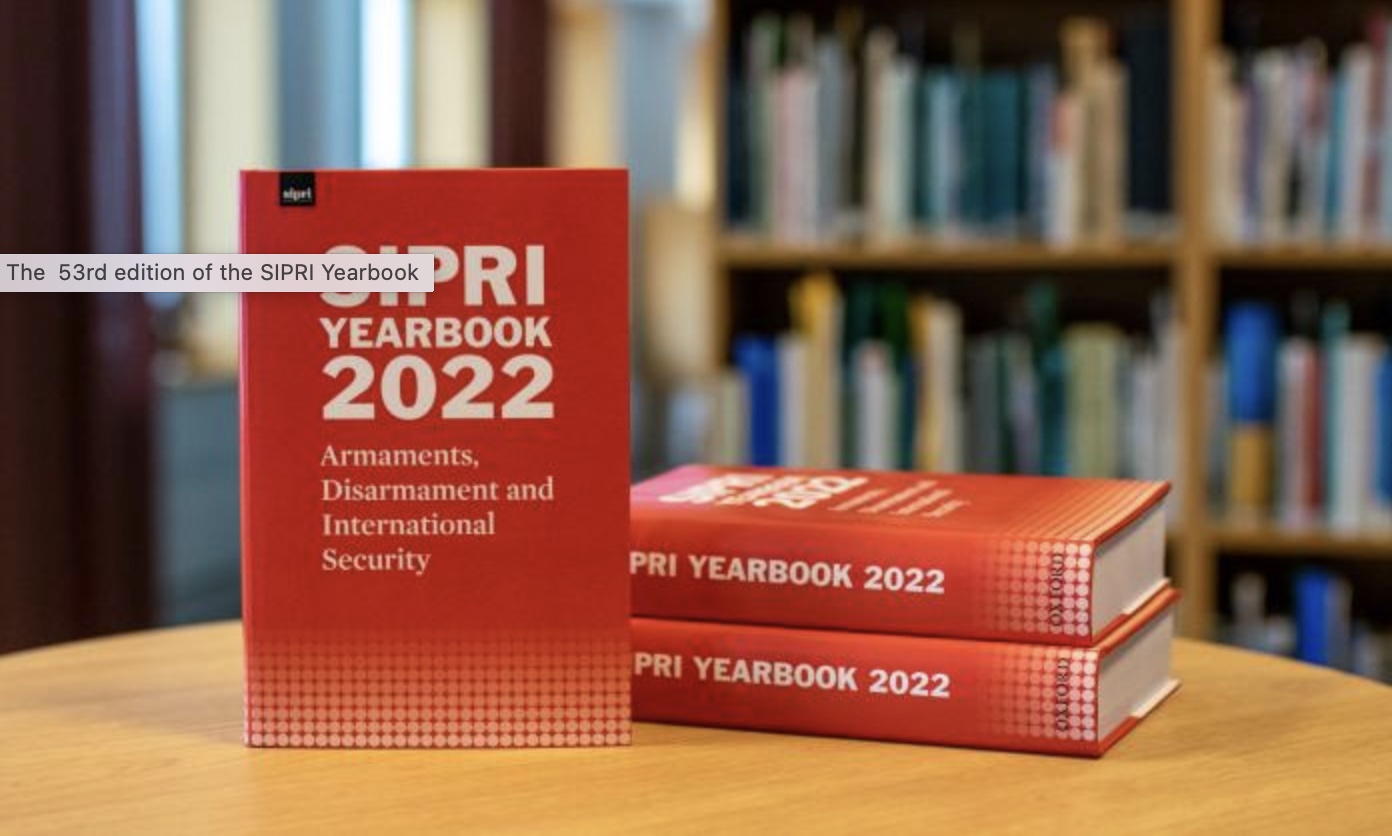 Signs that post-cold war decline in nuclear arsenals is ending

The nine nuclear-armed states—the United States, Russia, the United Kingdom, France, China, India, Pakistan, Israel and the Democratic People’s Republic of Korea (North Korea)—continue to modernize their nuclear arsenals and although the total number of nuclear weapons declined slightly between January 2021 and January 2022 (see table below), the number will probably increase in the next decade.

Of the total inventory of an estimated 12 705 warheads at the start of 2022, about 9440 were in military stockpiles for potential use. Of those, an estimated 3732 warheads were deployed with missiles and aircraft, and around 2000—nearly all of which belonged to Russia or the USA—were kept in a state of high operational alert.

Although Russian and US total warhead inventories continued to decline in 2021, this was due to the dismantling of warheads that had been retired from military service several years ago. The number of warheads in the two countries’ useable military stockpiles remained relatively stable in 2021. Both countries’ deployed strategic nuclear forces were within the limits set by a bilateral nuclear arms reduction treaty (2010 Treaty on Measures for the Further Reduction and Limitation of Strategic Offensive Arms, New START). Note, however, that New START does not limit total non-strategic nuclear warhead inventories.

‘There are clear indications that the reductions that have characterized global nuclear arsenals since the end of the cold war have ended,’ said Hans M. Kristensen, Associate Senior Fellow with SIPRI’s Weapons of Mass Destruction Programme and Director of the Nuclear Information Project at the Federation of American Scientists (FAS).

‘All of the nuclear-armed states are increasing or upgrading their arsenals and most are sharpening nuclear rhetoric and the role nuclear weapons play in their military strategies,’ said Wilfred Wan, Director of SIPRI’s Weapons of Mass Destruction Programme. ‘This is a very worrying trend.’

Russia and the USA together possess over 90 per cent of all nuclear weapons. The other seven nuclear-armed states are either developing or deploying new weapon systems, or have announced their intention to do so. China is in the middle of a substantial expansion of its nuclear weapon arsenal, which satellite images indicate includes the construction of over 300 new missile silos. Several additional nuclear warheads are thought to have been assigned to operational forces in 2021 following the delivery of new mobile launchers and a submarine.

The UK in 2021 announced its decision to increase the ceiling on its total warhead stockpile, in a reversal of decades of gradual disarmament policies. While criticizing China and Russia for lack of nuclear transparency, the UK also announced that it would no longer publicly disclose figures for the country’s operational nuclear weapon stockpile, deployed warheads or deployed missiles. 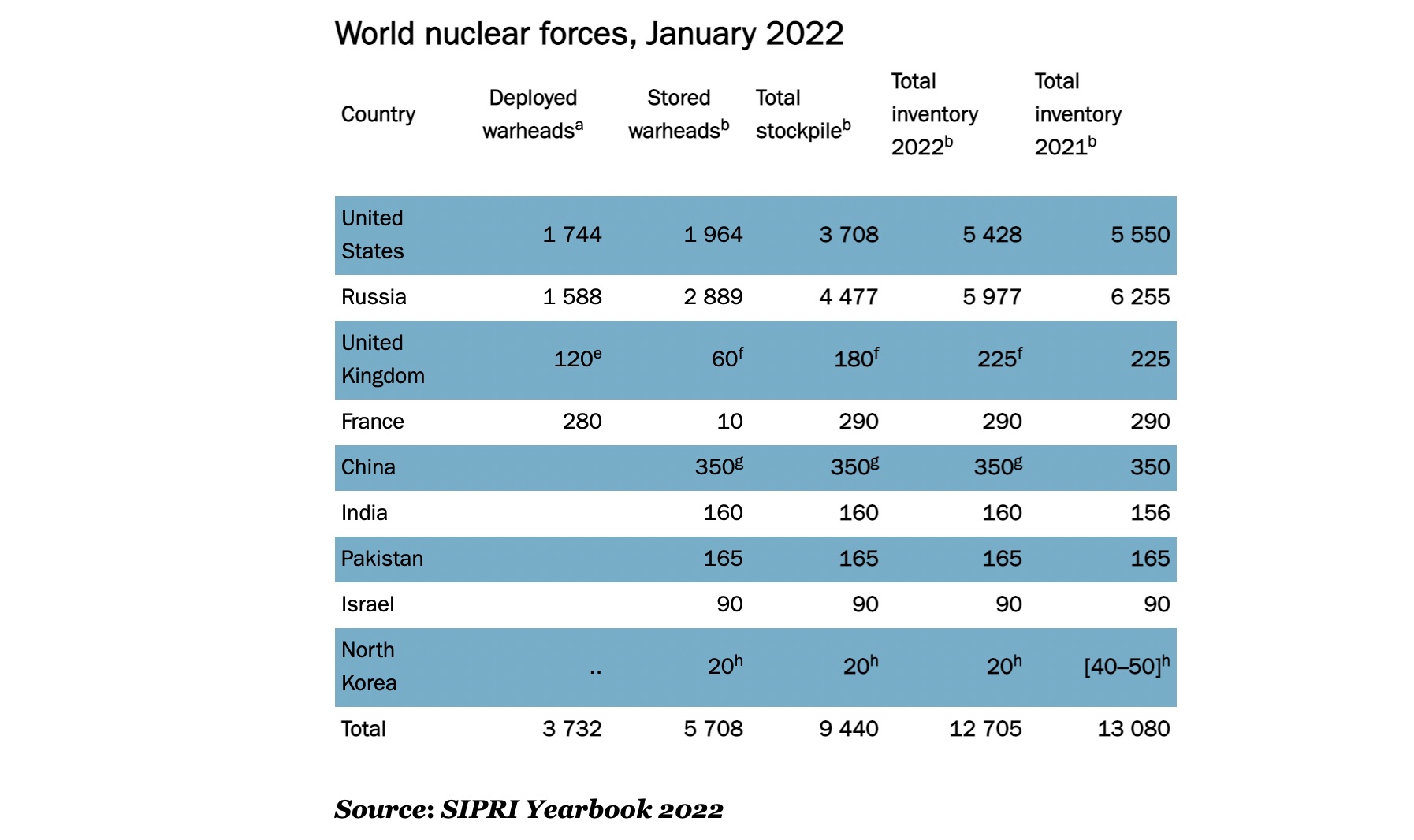 In early 2021 France officially launched a programme to develop a third-generation nuclear-powered ballistic missile submarine (SSBN). India and Pakistan appear to be expanding their nuclear arsenals, and both countries introduced and continued to develop new types of nuclear delivery system in 2021. Israel—which does not publicly acknowledge possessing nuclear weapons—is also believed to be modernizing its nuclear arsenal.

North Korea continues to prioritize its military nuclear programme as a central element of its national security strategy. While North Korea conducted no nuclear test explosions or long-range ballistic missile tests during 2021, SIPRI estimates that the country has now assembled up to 20 warheads, and possesses enough fissile material for a total of 45–55 warheads.

‘If the nuclear-armed states take no immediate and concrete action on disarmament, then the global inventory of nuclear warheads could soon begin to increase for the first time since the cold war,’ said Matt Korda, Associate Researcher with SIPRI’s Weapons of Mass Destruction Programme and Senior Research Associate with the FAS Nuclear Information Project.

There were several landmarks in nuclear diplomacy during the past year. These included the entry into force of the Treaty on the Prohibition of Nuclear Weapons (TPNW) in January 2021, having received the required 50 state ratifications; the extension for five years of New START, the last remaining bilateral arms control agreement between the world’s two leading nuclear powers; and the start of talks on the USA rejoining, and Iran returning to compliance with, the Iran nuclear deal, the Joint Comprehensive Plan of Action (JCPOA).

During 2021, the nuclear-armed permanent members (P5) of the United Nations Security Council—China, France, Russia, the UK and the USA—worked on a joint statement that they issued on 3 January 2022, affirming that ‘nuclear war cannot be won and must never be fought’. They also reaffirmed their commitment to complying with non-proliferation, disarmament and arms control agreements and pledges as well as their obligations under the 1968 Treaty on the Non-Proliferation of Nuclear Weapons, and pursuing the goal of a world without nuclear weapons.

Despite this, all P5 members continue to expand or modernize their nuclear arsenals and appear to be increasing the salience of nuclear weapons in their military strategies. Russia has even made open threats about possible nuclear weapon use in the context of the war in Ukraine. Bilateral Russia–USA strategic stability talks have stalled because of the war, and none of the other nuclear-armed states are pursuing arms control negotiations. Moreover, the P5 members have voiced opposition to the TPNW, and the JCPOA negotiations have not yet reached a resolution.

‘Although there were some significant gains in both nuclear arms control and nuclear disarmament in the past year, the risk of nuclear weapons being used seems higher now than at any time since the height of the cold war,’ said SIPRI Director Dan Smith.

A mixed outlook for global security and stability

The 53rd edition of the SIPRI Yearbook reveals both negative and some hopeful developments in 2021.

‘Relations between the world’s great powers have deteriorated further at a time when humanity and the planet face an array of profound and pressing common challenges that can only be addressed by international cooperation,’ said Stefan Löfven, Chair of the SIPRI Governing Board.

In addition to its detailed coverage of nuclear arms control and non-proliferation issues, the latest edition of the SIPRI Yearbook includes insight on developments in conventional arms control in 2021; regional overviews of armed conflicts and conflict management; in-depth data and discussion on military expenditure, international arms transfers and arms production; and comprehensive coverage of efforts to counter chemical and biological security threats.