An article from Forum Generation Equality

On 16 March, at a high-level dialogue against the backdrop of the 66th Session of the UN Commission on the Status of Women (CSW66), UN Women Executive Director Sima Bahous gathered with Action Coalition Leaders and global Generation Equality actors to reflect on the concrete progress made since the Generation Equality Forum in Paris and to share her bold vision to ensure future success. 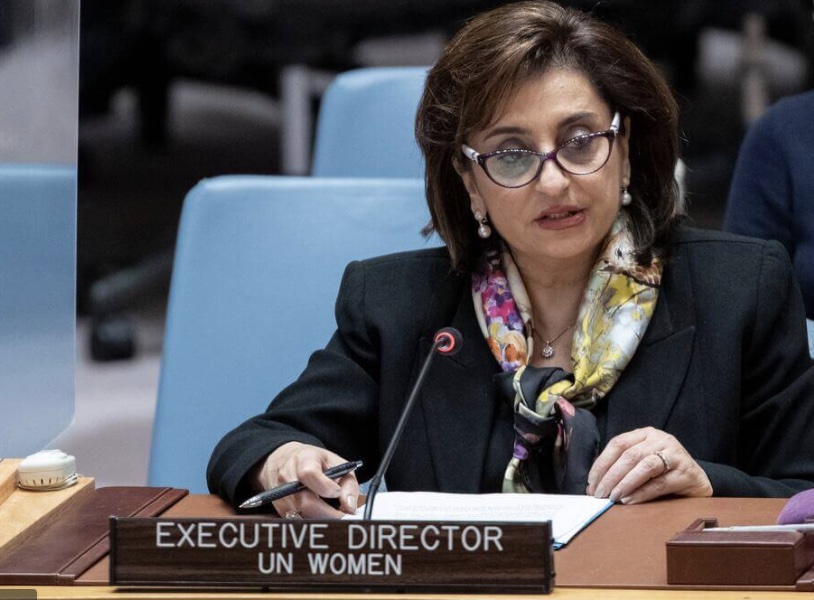 “It is time to look towards the future and the journey ahead of us to translate the promises of Generation Equality into implementation and impact in the lives of women and girls in all their diversity around the world. We must not lose focus and the sense of urgency and partnerships that characterized the Generation Equality Forum,” said Ms. Bahous.

“You can count on my full engagement and UN Women’s leadership and support as we march forward together,” she added, re-iterating her firm commitment to prioritize action on the key next steps of the Generation Equality journey. Ms. Bahous outlined three priorities for the way forward: accountability for existing commitments and support for implementation; generating new commitments; and continuing to promote the multistakeholder and intergenerational nature of the Generation Equality, as an example of inclusive multilateralism.

The flagship event marked the culmination of a 24-hour-long Generation Equality mobilization at CSW66, filled with over thirty events led by partners around the world. The diverse events convened under the 24-hour umbrella – including dynamic sessions on the Action Coalitions, Global Alliance for Care, and the Compact on Women, Peace and Security and Humanitarian Action as well as events on strengthening partner engagement in Generation Equality co-convened by the adolescent girl groups together with Member States and others – demonstrated that the momentum of the Generation Equality agenda continues to build globally and become increasingly rooted locally.

For the flagship event culminating the 24-hour arc, actors who have been heavily involved throughout the Generation Equality process joined Executive Director Sima Bahous in reflecting on the vision for the future, sharing their ambition for the coming years.

Acknowledging Ms. Bahous’s commitment to supporting the continuous and meaningful engagement of young people and adolescent girls, Anika Jane Dorothy, member of the former Generation Equality Youth Task Force, emphasized that the youth will continue “to mobilize, to organize and to challenge the status quo” throughout the Generation Equality journey ahead.

Monica Aleman, Senior Programme Officer at the Ford Foundation pointed to the timeliness of Generation Equality, explaining that in the current global landscape, global engagement and cooperation on gender equality action through UN structures is critical. “We cannot do this work on our own. We have to find ways to coordinate and work with others,” Aleman emphasized.

“We have a long voyage ahead of us to ensure a strong and permanent change,” added Élisabeth Moreno, Minister for Gender Equality, Diversity and Equal Opportunities for the Government of France. “We must continue working in a collaborative manner; only then will we achieve real progress. I strongly believe that together, we all can.”

Shifting focus from the future vision to concrete progress on the ground, Action Coalition Leaders gave positive updates on the implementation of commitments made at the Generation Equality Forum in Paris.

Sofia Sprechmann Sineiro, Secretary-General of CARE International, outlined CARE’s strategy to support at least an additional 10 million women and girls to gain control over their finances and access opportunities through either creating or strengthening existing savings and loans associations. The initiative is currently being implemented across 10 African countries as a core component of CARE’s commitment as a Leader of the Action Coalition on Economic Justice and Rights.

Over 95 partners have stepped up as Leaders of the Action Coalitions and are in the process of implementing bold commitments for women and girls. Together with the Commitment Makers they have made over 2,000 commitments to drive concrete results by 2026, with 1,000 of these commitments having been made since the Forum in Paris.

Ensuring transparency and mutual accountability for commitments is essential for achieving and measuring progress. The online Action Coalitions Commitments Dashboard that was unveiled at the event will play a key role in establishing this.

The Dashboard makes all commitments accessible, searchable, and visible to all. It therefore represents a key building block of the Accountability Framework that will monitor and measure progress for the next 5-years.

“If we are to truly achieve transformative change it means not only giving a seat at the table, but placing the right tools and resources in the hands of women, girls and gender-diverse people,” said Jeevika Shiv, National Youth Gender Activist for UN Women in India and MAKAAM Mahila Kisan Adhikaar Manch, as she outlined the progress made on the Accountability Framework to date.

The Framework is being developed collaboratively with a group of Action Coalition leaders and will be formally launched at the upcoming UN General Assembly in September.

The energizing dialogue highlighted the opportunities that the Generation Equality 5-year journey holds as an accelerator for fulfilling the promises of SDG-5 and the overall 2030 Agenda for Sustainable Development through strengthened partnerships and multilateral cooperation.

In her closing remarks, Executive Director Sima Bahous reflected on the shared sense of urgency to drive progress that clearly emerged throughout the discussion and underscored the imperative of fully leveraging the Generation Equality platform as a vehicle to do so.

Rounding off the event with a message of solidarity, Moderator Maria Fernanda Espinosa, Member of the GWL Voices for Change and Inclusion, said, “for those of you that have been part of this journey, and for all of those joining us now – onwards, together!”