A statement from the United National AntiWar Coalition

The US government and its corporate media have been trying to build a case that Russia is getting ready to invade Ukraine.  Their main argument is that they have observed around 90,000 Russian troops near the border with Ukraine.  Near the border means that they are on Russian territory, this is what the US calls aggression.  Although US and NATO forces have surrounded Russia and have conducted military maneuvers right at the Russian border, that is deemed to be not provocative, but Russia massing troops in its own territory is.  What is never said in any of these reports is that there are 125,000 Ukrainian troops in the Donbass region right near the Russian border.  These troops have been freshly equipped by the US with advanced weaponry and US military “advisors” have been aiding them in their aggressive military posture.  The massing of Russian troops near its border is a defensive move on their part to counter the threat of the US and NATO and their ally Ukraine that wants NATO membership. 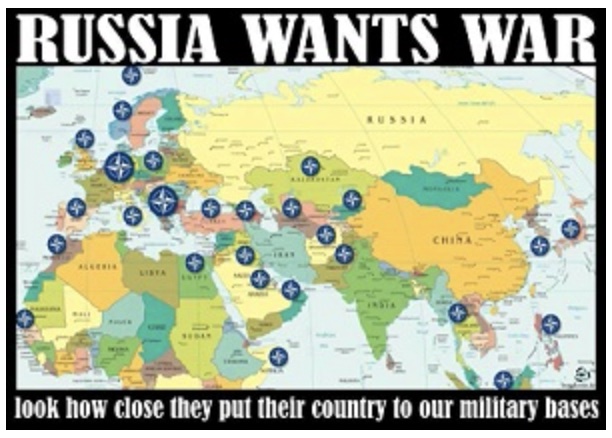 In 1990, as the Soviet Union was collapsing, James Baker the US secretary of state told the Soviet leaders that NATO would not expand east of Germany.  Since then, it has expanded into 14 countries in violation of that agreement, right up to the Russian border.  History has since shown the world that it is the US and its NATO allies that are the aggressors everywhere in the world.  It is the US with its military in more than 170 countries, with 20 times the number of foreign bases as all other countries in the world combined that has invaded and occupied one country after the next.  It is the US that spends almost as much on the military as all other countries combined. This is what the Russians fear and with good reason.

The Russians have only to look at the coup that the US orchestrated in Ukraine in 2014.  They can recall Senator John McCain speaking to the protesters in Maidan Square, Kiev, urging them forward to topple their government, and US diplomat Victoria Nuland as she brought treats for the Maidan protesters and was recorded on the phone saying “fuck the EU” because they wanted to replace the Ukrainian president with someone other than the US hand-picked person.  The US pick, Arseniy Yatsenyuk, of course, was installed as the new prime minister after the coup, and ever since the US has had important influence in Ukraine.  The new finance minister in the coup government was Natalie Jeresko, from the US and Joe Biden’s son took a role on the board of the largest Natural gas company in the country.   The new government contained far right and Nazi parties such as the Svoboda Party and others associated with a coalition of right-wing groups called the Right Sector.  In Ukraine today there are openly fascist militias, swastikas chalked on walls or displayed on jackets and torchlight marches through the streets with people chanting anti-Semitic and anti-Russian slogans.   This is what the US put in place and what Russia – who lost 20 million people to the Nazi terror in World War II – fears.

The key demand of Russia is that Ukraine, which has the largest border with Russia of any European country, not become a NATO member.  They also demand that the U.S. and NATO back off on their approach to the Russian border and stop placing armed nuclear installations on their border.   The US/NATO/Ukraine aggression is happening at a time when the Ukrainian president Vladimir Zelenskiy has been making promises to “win back” Crimea and has started an offensive against the Eastern break-away regions of Luhansk and Donetsk.  All three areas are Russian speaking regions that rejected the 2014 coup as far-right and Nazi forces took hold of the government.  The people of Crimea voted by over 90% to break from Ukraine and re-integrate into Russia since they had been part of Russia untill 1956 anyway.  In the Donbass, which is the area of Luhansk and Donetsk, the people organized into the Donetsk People’s Republic and the Luhansk People’s Republic, created their own flags and built people’s militias to defend their territory against the right-wing and anti-Russian government of Kiev.  Although a cease fire agreement was reached, it has been consistently violated by Kiev and recently the Zelenskiy government has stepped-up attacks in the regions.  More than 14,000 people have been killed in this war in the Eastern Ukraine.

Another reason for the recent US/Ukraine aggression may be because just recently, Russia completed its Nordstream 2 natural gas pipeline from Russia to Germany and is ready to turn it on.  This can provide gas to Germany and Europe at a much better price than the US can offer with its fracked gas.  This will also replace the Russian gas pipeline that runs through Ukraine.  Natural gas was a key factor in the 2014 Ukrainian coup.  Like many of the other recent US initiated wars, energy may be a big issue in this situation too.

– No US weapons or military advisors for the Ukrainian military
– Stop the US saber rattling, No war with Russia
– Keep Ukraine out of NATO

(Editor’s note: UNAC brings together most of the leading antiwar organizations of the United States. A recent video conference of UNAC against war in the Ukraine included representatives of the ANSWER coalition, Black Alliance for Peace, CodePink, International Action Center, Popular Resistance, Global Network Against Weapons and Nuclear Power in Space, US Peace Council, Black Agenda Report, Women’s International League for Peace and Freedom, Veterans for Peace and World Beyond War.)