A press release from Stop the War Coalition

Stop the War opposes any war over Ukraine, and believes the crisis should be settled on a basis which recognises the right of the Ukrainian people to self-determination and addresses Russia’s security concerns. 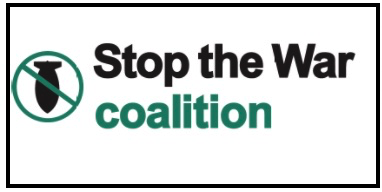 Our focus is on the policies of the British government which have poured oil on the fire throughout this episode. In taking this position we do not endorse the nature or conduct of either the Russian or Ukrainian regimes.

Unlike the French and German governments, it has advanced no proposals for a diplomatic solution to the crisis, and has contributed only sabre-rattling.

Indeed, Defence Secretary Ben Wallace has even accused those seeking a peaceful settlement of preparing “another Munich.”

Instead, the British government has sent arms to Ukraine and deployed further troops to Eastern Europe, moves which serve no purpose other than inflaming tensions and indicating disdain for Russian concerns.

It has also declared that Ukraine has a “sovereign right” to join NATO, when no such right exists to join it or any other military alliance.
Britain needs to change its policy, and start working for peace, not confrontation.

Stop the War believes that Russia and Ukraine should reach a diplomatic settlement of the tensions between them, on the basis of the Minsk-2 agreement already signed by both states.

It believes NATO should call a halt to its eastward expansion and commit to a new security deal for Europe which meets the needs of all states and peoples.

We refute the idea that NATO is a defensive alliance, and believe its record in Afghanistan, Yugoslavia and Libya over the last generation, not to mention the US-British attack on Iraq, clearly proves otherwise.

We support all efforts to reach new arms control agreements in Europe and to move towards nuclear disarmament across the continent.

We urge the entire anti-war movement to unite on the basis of challenging the British government’s aggressive posturing and direct its campaigning to that end above all.