The time has come to live in a spirit of fraternity and build a culture of peace, sustainable development, tolerance, inclusion, mutual understanding and solidarity, Pope Francis said. 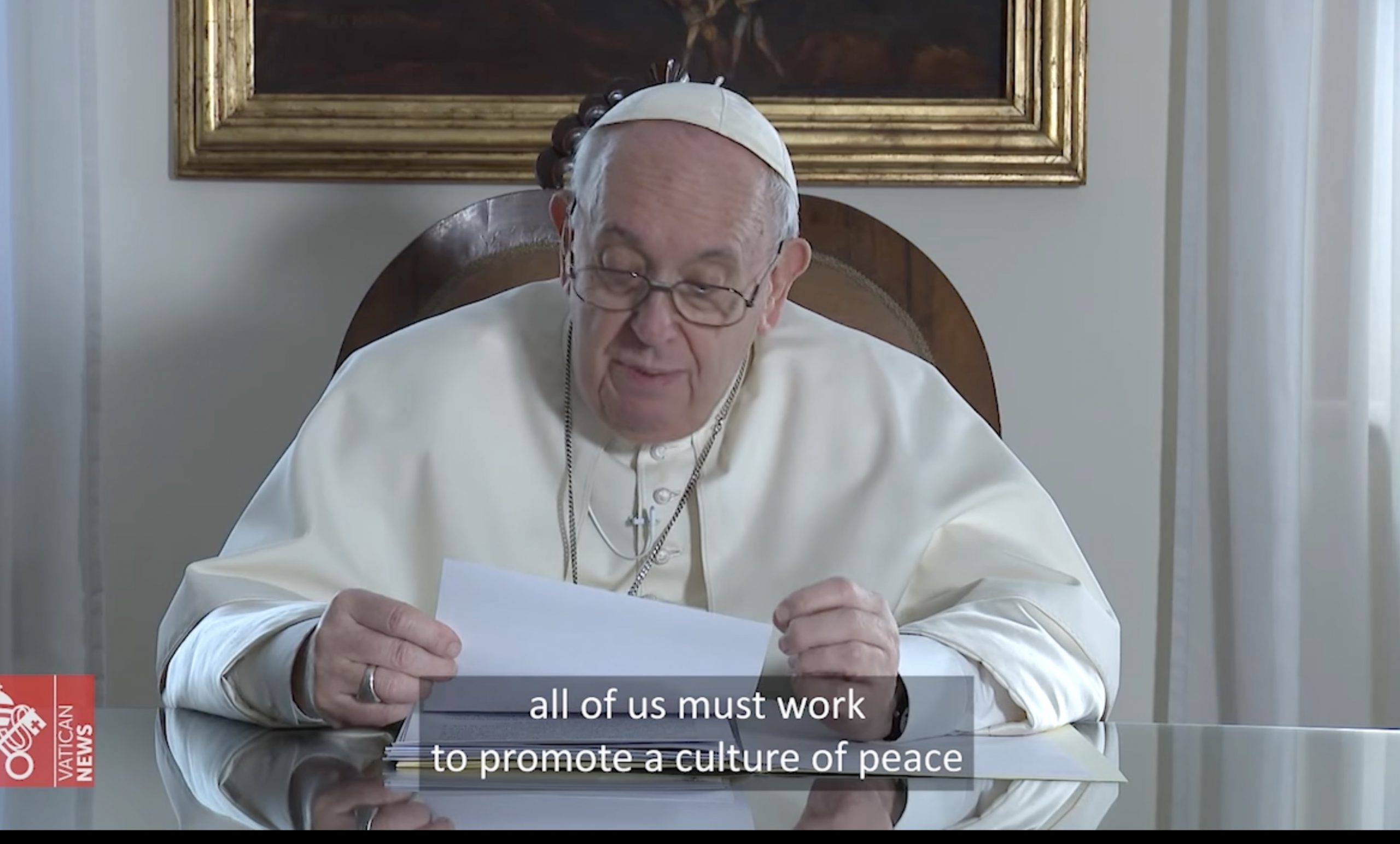 Frame from video of the Pope’s message

“Now is not a time for indifference: either we are brothers and sisters or everything falls apart,” he said in a video message marking the International Day of Human Fraternity Feb. 4.

The international celebration is a U.N.-declared observation to promote interreligious dialogue and friendship on the anniversary of the document on human fraternity signed in Abu Dhabi in 2019 by Pope Francis and Sheikh Ahmad el-Tayeb, grand imam of Al-Azhar in Egypt.

The pope, the sheikh and U.S. President Joe Biden all issued messages for the commemoration.

“Fraternity is one of the fundamental and universal values that ought to undergird relationships between peoples, so that the suffering or disadvantaged do not feel excluded and forgotten but accepted and supported as part of the one human family. We are brothers and sisters,” the pope said in Italian in his video message.

People must walk together, aware that, “while respecting our individual cultures and traditions, we are called to build fraternity as a bulwark against hatred, violence and injustice,” he said.

“All of us must work to promote a culture of peace that encourages sustainable development, tolerance, inclusion, mutual understanding and solidarity,” he said.

People of different faiths all have a role to play, he said, because “in the name of God, we who are his creatures must acknowledge that we are brothers and sisters.”

And all of humanity lives “under the same heaven,” so believers in God and all people of goodwill should journey together, he added.

(Click here for a French article on this subject and here for a Spanish article.)

“Do not leave it to tomorrow or an uncertain future,” he said. “This is a good day to extend a hand, to celebrate our unity in diversity — unity, not uniformity, unity in diversity — in order to say to the communities and societies in which we live that the time of fraternity has arrived.”

“The path of fraternity is long and challenging, it is a difficult path, yet it is the anchor of salvation for humanity,” the pope said. “Let us counter the many threatening signs, times of darkness and mindsets of conflict with the sign of fraternity that, in accepting others and respecting their identity, invites them to a shared journey.”

The pope encouraged everyone to dedicate themselves to “the cause of peace and to respond concretely to the problems and needs of the least, the poor and the defenseless. Our resolve is to walk side by side, ‘brothers and sisters all,’ in order to be effective artisans of peace and justice, in the harmony of differences and with respect for the identity of each.”

In his video message, Sheikh el-Tayeb said, “This celebration means a quest for a better world where the spirit of tolerance, fraternity, solidarity and collaboration prevails. It also indicates a hope for providing effective tools to face the crises and challenges of contemporary humanity.”

“We have embarked on this path in the hope for a new world that is free of wars and conflicts, where the fearful are reassured, the poor sustained, the vulnerable protected and justice administered,” he said.

In Biden’s written statement commemorating the day, he encouraged everyone to work together to overcome the global challenges that no one nation or group of people can solve on their own.

“For too long, the narrowed view that our shared prosperity is a zero-sum game has festered — the view that for one person to succeed, another has to fail,” he wrote. “This cramped idea has been a source of human conflict for centuries.”

Problems such as the COVID-19 pandemic, the climate crisis and increased violence, “require global cooperation from people of all backgrounds, cultures, faiths and beliefs. They require us to speak with one another in open dialogue to promote tolerance, inclusion and understanding,” and to guarantee that “all people are treated with dignity and as full participants in society,” he wrote.

“On this day, we affirm — in words and in actions — the inherent humanity that unites us all,” the president wrote. “Together, we have a real opportunity to build a better world that upholds universal human rights, lifts every human being and advances peace and security for all.”

Cardinal Miguel Ayuso Guixot, president of the Pontifical Council for Interreligious Dialogue and member of the Higher Committee of Human Fraternity, said in a statement that the day “is an opportunity to advance the sense of responsibility toward the poor, vulnerable, homeless and oppressed.”

“I hope human fraternity will turn into a global movement of promoting moral values shared by all peoples from all walks of life,” the cardinal said.