An article by Eugenia Coppel in Milenio

Urbivillas del Prado and Riberas del Bravo in Ciudad Juárez illustrate how the strategy of Women Builders of Peace (MUCPAZ) operates, a federal program that by March of this year has reached 107 municipalities in 27 entities. 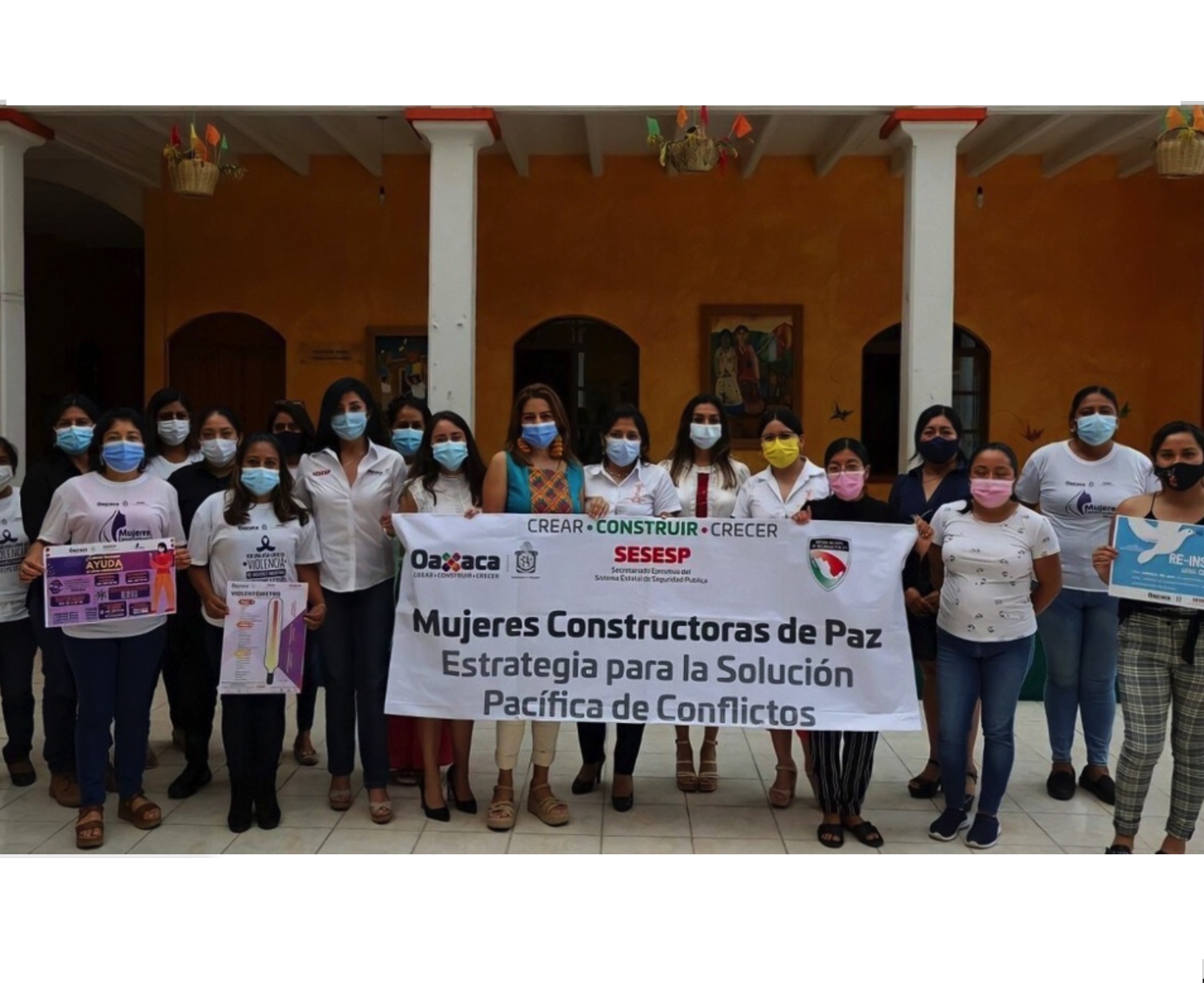 Until just a year ago, the Urbivillas del Prado subdivision, on the southern outskirts of Ciudad Juárez, Chihuahua, was a group of gray houses, with streets full of rubble, tires and garbage, and without adequate public spaces for meetings between neighbors. . “It was sad because everyone was on her own,” says Mari Velázquez, a teacher who has lived in this neighborhood for 12 years with her husband and her two children.

“Right now it’s another world, it’s totally changed,” says Velázquez, one of the women leaders who has promoted the transformation of her environment, proudly. The most obvious change is the colors that illuminate the facades of about 90 percent of the buildings, which were painted by the community itself, and with special enthusiasm of the girls and boys, says Mari Velázquez.

The strength of the neighborhood organization is also reflected in cleaner streets, in a park without rubble and in the trees planted there; on the newly demarcated soccer field and on the now colorful tires that serve as games for children. Also in the kermesses, collective harvests, piñata workshops, boxing classes, mental health campaigns and initiatives for the prevention of gender violence and addictions, among other activities that began to take place this same year.

For Mari Velázquez, the most important thing that has been generated is the union between neighbors, which grows stronger every day. “Before it was just a greeting and that’s it, but now we have more communication, more friendship; We are committed to working together to seek solutions to the problems we have, working together with women, men, girls and boys, ”says the president of the newly formed Urbivillas coalition.

The former governor of Chihuahua himself, Javier Corral, recognized the efforts of Mari and the entire community in an event held in August 2021, a few weeks before she ended her term.

In front of one of the many walls transformed into multicolored murals, the politician described the subdivision as a “referential model that can serve not only many other areas of Juárez but of the country.”

Corral gave thanks personally for the design of the project, as well as for the coordination of the participating public and private actors to Eunice Rendón, expert in public policy and international consultant on security, migration and bioethics issues.

Eunice Rendón works as an external advisor to governments in the creation of strategies to prevent violence and addictions. One of the federal programs with which she collaborates is Mujeres Constructoras de Paz (MUCPAZ), of which the Urbivilla project is part.

As an activist for the rights of migrants she has implemented projects of the same program in another neighborhood of Juárez, Riberas del Bravo, as well as in municipalities of Oaxaca, Tlaxcala and the State of Mexico.

In an interview, Eunice Rendón explains that she designed a protocol based on the Women Builders of Peace program, where she detailed the step by step to achieve a successful operating experience in any municipality in Mexico. This includes a baseline, a follow-up evaluation and different possible scenarios in the process of articulating a community, in conjunction with municipal, state, federal, private sector and society actors.

In the Global Peace Index 2021, Mexico ranks 126th out of a list of 161 countries, with the latter being the most violent.

For Johan Galtung, one of the most important theorists in peace studies and director of the International Peace Research Institute, peace is not only defined as the absence of conflicts, but as the positive transformation of them. Generating positive peace means creating harmonious relationships between two or more parties to the conflict and undertaking community projects.

Also, the international community has recognized that women are agents of change and that their participation is essential in peacebuilding processes. In 2000, the United Nations Security Council approved resolution 1325, which urges women to actively participate in achieving lasting peace processes.

The MUCPAZ strategy, which starts from these bases, was launched in 2019 by the National Institute of Women (Inmujeres) and the Executive Secretariat of the National Public Security System (SESNSP). Its objective is to incorporate a human rights perspective in Mexican municipalities, promote gender equality and empower women to contribute to peace processes.

According to data from the Mexican government, as of March 2021, 217 networks of Women Peacebuilders have been implemented, with the participation of 3,510 women in 107 municipalities and 27 states, with an investment of more than 123 million pesos.

During the inauguration of the program in the Venustiano Carranza mayor’s office, in Mexico City, the head of Inmujeres, Nadine Gasman, emphasized that MUCPAZ consists of preventive work, rather than direct care for victims of gender violence, since that work corresponds to other instances. What the strategy seeks is to influence “the reconstruction of communities and the reestablishment of the social fabric,” said the official.

Some results are already visible in the two neighborhoods of Ciudad Juárez where the pilot projects were launched. Eunice Rendón talks about the various activities that have been carried out in these territories, starting with the main thing, which is the formation of networks of women, but also of men, young people, girls, boys and adolescents.

From there, courses and workshops have been offered on the basic principles of gender, on how to contact various authorities and / or report violence, or on how to carry out productive projects. Through community activities, such as soccer, hip-hop or mechanics, the theme of positive masculinities among young men is introduced.

Both in Urbivillas del Prado, as in Riberas del Bravo – one of the neighborhoods where the highest rates of feminicides and sexual violence are registered in Juárez – the most successful activities have been those that have to do with providing women with tools for their productive development, with courses, workshops, certifications and creation of cooperatives.

“You cannot ask for gender empowerment if women are financially dependent on the aggressor; that is what often slows them down. The other learning is enhanced when there is something that can give them an economic possibility, ”says Eunice Rendón.

A 40-second video illustrates the type of work that has been done in the Riberas del Bravo neighborhood. In it a group of girls and boys appears singing and dancing a feminist version of a popular children’s round: “Rice pudding / I want to find / a partner who wants to dream / who believes in herself / who goes out to fight / to conquer the dream of more freedom “…

“It is part of the empowerment process,” says Yadira Cortés, coordinator of the Red Mesa de Mujeres, in whose Facebook account the video can be found.

This network is a civil association that since 2004 works for gender equality and non-violence against the women of Ciudad Juárez. Since 2017, it has been present in Riberas del Bravo, where it has focused on the training of women leaders and has just joined the MUCPAZ network.

Cortés explains that the work that she and her colleagues have carried out is very similar to the proposal of the federal program, and considers that by joining this larger network, her intervention methodology has been strengthened and focused. “We were already working on violence prevention and now we are also working on peace-building issues,” says the activist and professor at the Autonomous University of Ciudad Juárez.

Riberas del Bravo, in the description of Yadira Cortés, is a peripheral colony where there is no industry or medical services; the ambulance does not arrive and the police units almost never pass; the pavement is in poor condition, public transportation is poor and scarce, and there are high rates of drug use and violence.

For this reason, the Red Mesa de Mujeres highlights the importance of training women leaders in this area. “We started with the idea of ​​building a group of ten women and we already have 65 of all ages,” says the activist.

“They are women who are already known in the community: the lady who always talks to the police, the one who reports on support programs or the coordinator of the chapel. Other women identify them and are a point of reference ”.

Finding and activating these natural leaders and helping them continue to work in a self-managed way is the main purpose of MUCPAZ, in the opinion of the specialist Eunice Rendón. The strategy has shown that through them it can have a positive impact on different levels of daily life in the community.