Worldwide, complex conflicts and humanitarian crises continue to ravage communities and hinder the overall well-being and prosperity of societies. Women are often the most impacted by these crises, bearing the brunt of conflict and paying a higher price of the devastation – from increased gender discrimination and violence, to the waning of gender-sensitive structures and programming. Still, they remain largely excluded from participating in peace processes, despite overwhelming evidence showing that women’s involvement in peacebuilding and mediation leads to lasting, positive peace that goes well beyond just the silencing of guns. 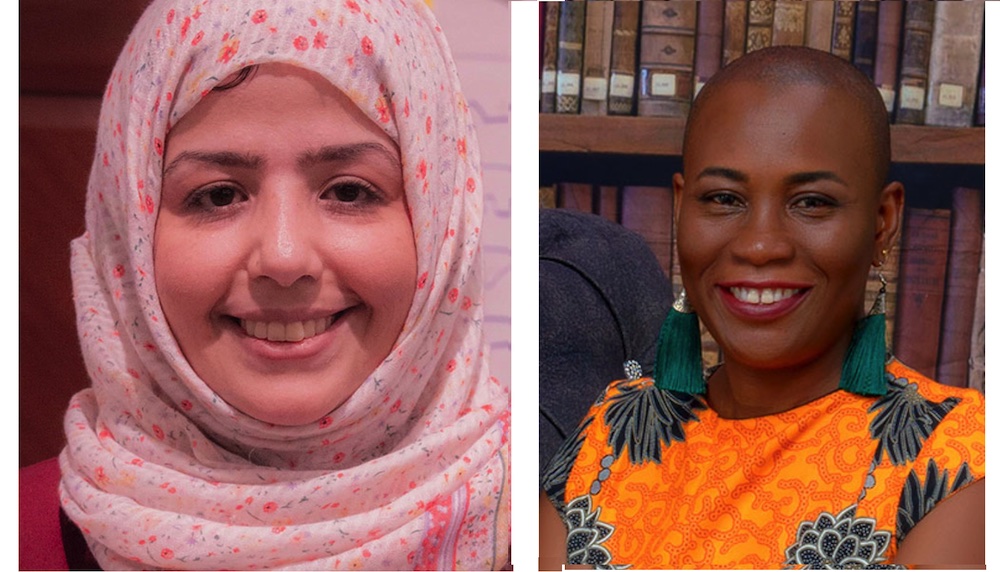 Although important strides have been made since the adoption of the United Nations Security Council resolution 1325 in 2000, women’s direct participation and representation in formal peace processes continues to be the one area that lags behind in the implementation of the  empowering women leaders to participate in peacebuilding becomes increasingly crucial. Women who participate in peace processes tend to represent broader and more diverse constituencies, ensuring a range of views and interests are represented and peace processes are fully democratized.

Amera Malek is a Syrian activist in the field of Women, Peace and Security and, as the director of MAUJ for Development (previously Radio Souriat), she is familiar with digital technologies and the use of tools to enhance women’s voices and gather support. “We launched our online radio in 2014 as a media initiative and platform that provides a voice for Syrian women, tackling issues affecting them – from honor killings to sexual harassment, and more – and addressing wider societal problems from a gender perspective,” says Malek. “We started out by broadcasting programmes and live talks, bringing together women from all walks of life and taking into account their specific needs and situations.”

As the Syrian conflict went on and power cuts and other disruptions became more frequent, Radio Souriat turned to social media as a new outlet for their activism. “In complex, conflict-afflicted contexts such as the Syrian one, new tools must be deployed to foster participation and mobilize a country-wide support base. On top of our radio work, we’ve taken on producing visual and audio assets for dissemination on social media, which has enabled us to continue to reach out to and engage with communities.”

In June 2020, Radio Souriat changed its name to MAUJ for Development, a community-based, not-for-profit foundation guided by feminist principles. MAUJ works on four strategic programmes: supporting pluralism and community cohesion, promoting women participation in public life, producing gender-sensitive media content, and ensuring sustainable resources. From its headquarters in al-Nabk, MAUJ reaches women across the country and beyond, supporting them to voice their opinions and be informed on issues that directly affect their lives.

While digital tools have created an unprecedented opportunity to democratize peace efforts, making them more transparent and inclusive, some issues remain to be addressed. “We see that women are more likely to participate in online discussions because they can do so anonymously and flexibly, balancing their care burdens,” says Malek. “Yet, we must ensure these methods are underpinned by robust gender analysis. We must continue to leverage the huge potential of digital tools for constituency-building while ensuring that existing discrepancies in accessing digital tools do not further inequalities.”

Kawkab Al-Thaibani is the co-founder of Women4Yemen, a network of women working in media, human rights and civil society, which mobilizes and empowers women to foster peace and achieve stability for Yemen. As part of her work, she has been seeking to close the gap between women’s grassroots initiatives for peace and decision-making spaces.

“Yemeni women are facing huge challenges to access negotiating space and get a seat at the peace table,” says Al-Thaibani. “As the conflict in Yemen continues, women’s representation has decreased quite considerably: for the first time in 20 years, women are absent from the newly formed Cabinet. In this context, it is vital that political leaders expand their constituencies and engage closely with civil society to make sure women’s voices are heard.”

“Yemeni women are the carriers of peace and have been instrumental in leading the country to a more stable and peaceful transition,” she adds. “Yet, we don’t have full legitimacy to support peacemaking initiatives and be involved in the peace process in a meaningful way. More work needs to be done at the government and institutional levels to connect women’s grassroots movements with formal representatives who sit at the decision-making table.”

“While it’s important that representatives build strong civil society constituencies, this per se is not enough. To be credible and for constituencies to be strengthened, politicians must ensure that they represent the interests and views of their communities in peace talks, and that they make themselves accountable for shaping the negotiating agenda, ensuring the requests of women are being dealt with.”

Odi Lagi, Program Director of the Network of University Legal Aid Institutions (NULAI), Nigeria, highlights the importance and challenges of gender quotas and other temporary special measures in fostering more gender-inclusive peace processes. “I believe the introduction of quotas as a temporary measure to achieve gender equality in political participation is very much necessary,” says Lagi. “We underestimate the importance for women and girls of seeing women in leadership positions and the power of role-modelling: seeing women in power is the first step toward becoming one. However, quotas also have limitations – their introduction by governments has increasingly become a box-ticking exercise rather than a tool to foster positive change. We need to set a 50/50 benchmark if we truly want to see structural transformation in decision-making spaces.”

In Nigeria, a 30 per cent quota for representation in political processes was introduced in the early 2000s. Since then, women’s participation has been declining and, as conflict escalated, women’s voices have been increasingly ignored. “While instruments like quotas have strong transformative potential, there is also a clear danger that they might restrict greater women’s participation and be used by conflict parties as bargaining chips to appeal to minority and women’s groups, while in fact making little progress in advancing meaningful political inclusion,” adds Lagi.

About the Global Convening

From 7-27 July 2021, UN Women, in partnership with CMI – Martti Ahtisaari Peace Foundation, hosted the global convening on “Gender-Inclusive Peace Processes: Strengthening Women’s Meaningful Participation through Constituency Building.” The conference explored good practices and strategies for gender-inclusive constituency building and the links between constituency building and women’s meaningful participation in formal peace processes, with a focus on the Middle East and North Africa (MENA) region. It was made possible through a long-term collaboration with, and financial support from, the German Federal Ministry for Economic Cooperation and Development (BMZ) in cooperation with Deutsche Gesellschaft für Internationale Zusammenarbeit (GIZ) GmbH and the Finnish Ministry for Foreign Affairs.

Visit the conference public dashboard on SparkBlue for more information