Two articles from the United Nations

Traditional arts and crafts are being used to build peace and dialogue in Mali thanks to the work of the UN peacekeeping mission in the country, MINUSMA. 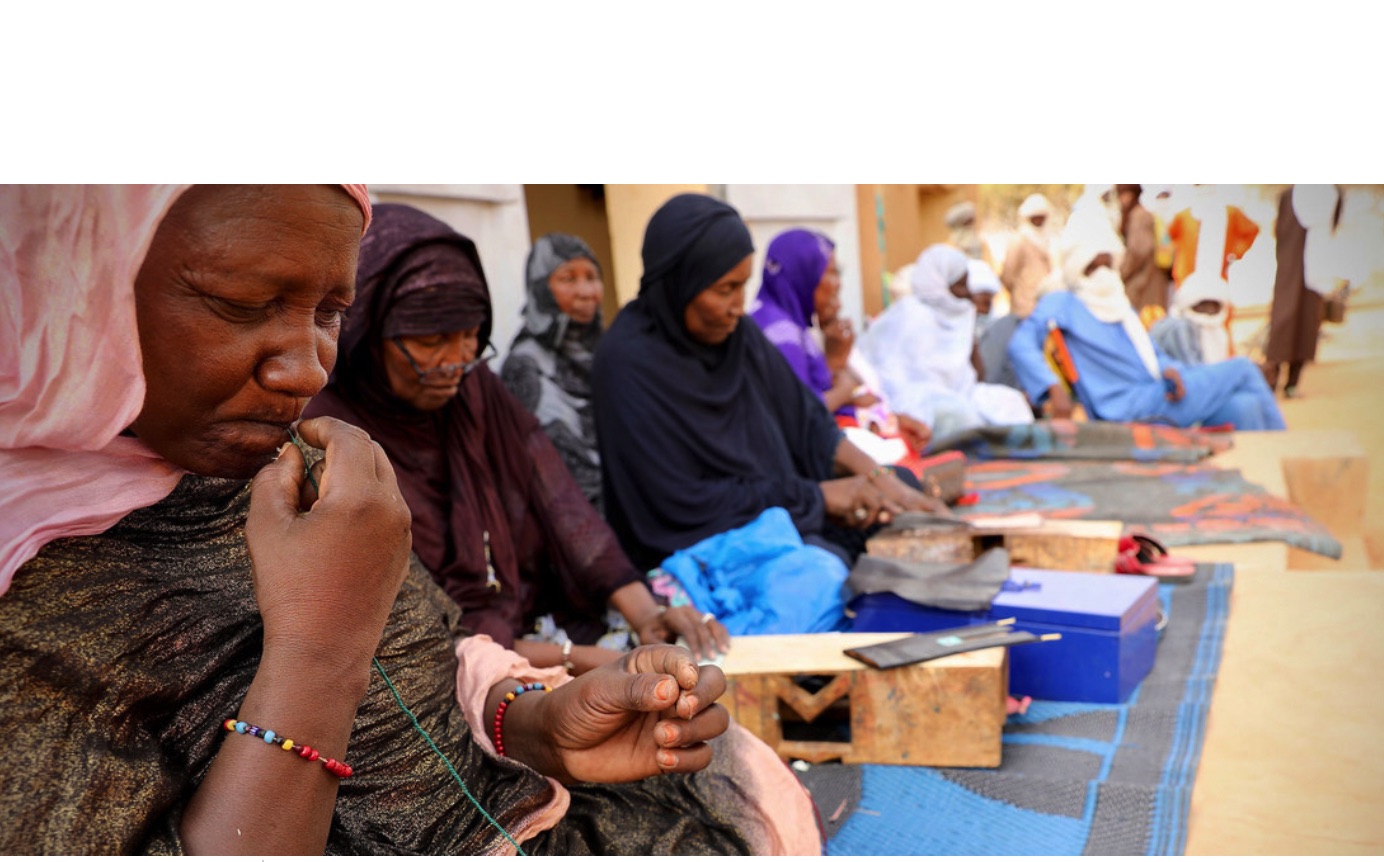 Some 360 artisans based around Menaka, in the far northeast of the West African nation, some of whom fled as refugees to neighbouring Niger, have been encouraged to return to the town’s newly restored House of Artisans to practice a range of traditional crafts, including leatherwork, silver-smithing, sewing and carpentry.

MINUSMA, which supported the restoration, is hoping bringing artisans together from a range of ethnic groups will help to reinforce social cohesion, tolerance and improve security as well as providing much-needed employment.

The Menaka region is experiencing increasing insecurity as a result of attacks by terrorist groups and armed bandits.

A related article from the United Nations

Taking a piece of leather in her hand, Bachira, a Tuareg artisan, starts weaving an ornament that will be sewed onto a new colourful tribal saddle cushion that may end up decorating a home somewhere.

Bachira is an accomplished leather worker. She is among 360 artisans in Mali sponsored by the United Nations Multidimensional Integrated Stabilization Mission in Mali (MINUSMA) to promote social cohesion and dialogue through traditional art.

“When I returned home from exile, the only personal belongings I brought were my knowledge and my hands. This project is helping me to make the most of what I have. It ensures I can cover my family essential needs. I want them to have a better life than mine,” she said.

Bachira Walet Mohamed, a 50-year-old mother-of-eight is from a village close to Menaka, in the far north-east of Mali. She fled her home with her family during the humanitarian crisis following the 2012 conflict. The whole family lived one year in exile in Niger, before returning in 2014.

Only last year did Bachira fully retake her tribal leather work. Thanks to “The House of Artisans’, a regional crafters association, rebuilt and equipped using MINUSMA support. “During those difficult years of violence shaking our town, the workshop was vandalized and as a result it closed down. I didn’t have anything, not even to buy food,” she recalled.

Art to foster dialogue and tolerance

MINUSMA saw the potential to promote peace and dialogue through traditional arts and crafts, thus the idea to restore “The House of Artisans” to its glory, through a Quick Impact Project (QIP). The Menaka ‘House of Artisans” was completely rebuilt and equipped with furniture, machines and tools for artisans working in jewelry, welding, leatherwork, forging metal, carpentry, sewing and wood carving.

The project, under USD$45,000, gave back an economic activity to up to 360 artisans from different ethnics’ groups It even improved the operating environment and enhanced their production and distribution capacities through training.

MINUSMA’s QIP objective is to contribute to the socioeconomic development by improving the income of artisans across the Menaka region, which is experiencing increasing insecurity as a result of attacks by terrorist groups and armed bandits.

According to Adass Ag Abdoul Karim, President of the Union of Artisans and coordinator of the project, art can break barriers and promote tolerance because “the objective to create a space for dialogue, tolerance and peace through art,” he said. “Thereby, reducing unemployment and improving family income of the artisans.” 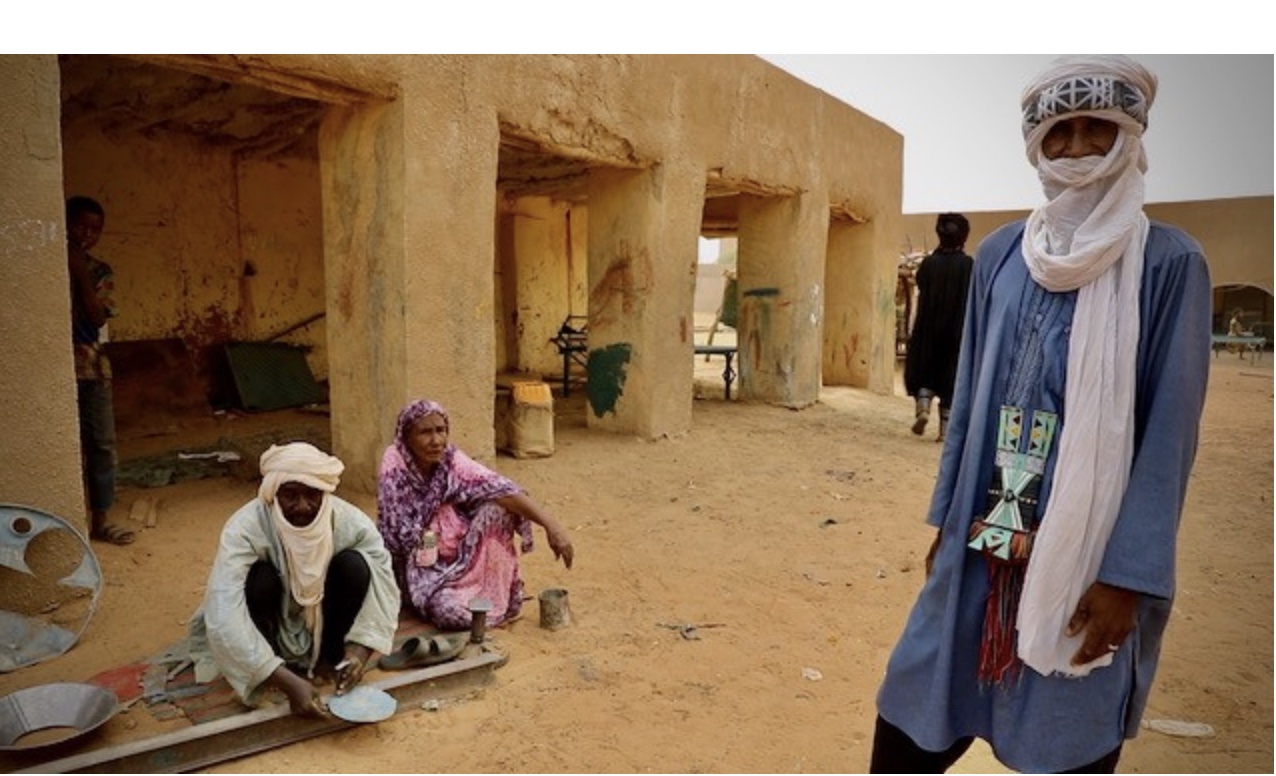 Adass is grateful for MINUSMA’s continuous support to his community and for helping rebuild the confidence in Mali’s well-known craftsmanship. Nevertheless, he underlines the need for young people to be trained, in order to safeguard the ancient traditions of Malian artistry. By doing so, one is both promoting the quality and marketing skills of artisans, particularly those of women and the creation of employment. All leading to peace and stability.

While the temperature is reaching its peak in the sandy streets of Menaka, under e blazing sun, several Tuareg jewelers toil away inside the House of Artisans. Most of them are hand-engraving silver pieces homemade tools. This shows how little has changed in the traditional Tuareg jewelry making process.

Alhader Ag Tital is fifty-one-year-old. He is Tuareg, very quiet and a silversmith. He learnt the trade from his grand-parents and parents, becoming a master himself. His quietness ends up when he talks about his participation in this project. “I am very, very, very happy. It’s the first time we have a proper space for working. We now have a safe and operational place, and we are so grateful.”

Despite being the most dangerous active peacekeeping deployment in the world, with so far 158 blue helmets killed by hostiles forces, and dozens more killed by accidents and illness since its creation in 2013, MINUSMA remains committed to help rebuild sustainable peace in this landlocked north-west African nation. This project proves peace and dialogue can be achieve through numerous actions, involving all groups and different communities, and, at the same time promoting livelihoods and empowerment.