António Guterres has reaffirmed the full support of the United Nations to amplifying the powerful testimony of the survivors of the atomic bomb that was dropped on the Japanese city of Nagasaki, 76 years ago, which has helped build a “powerful global movement against nuclear arms”. 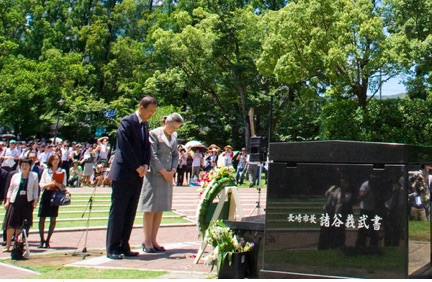 In his message to the Nagasaki Peace Memorial on the 9 August anniversary, the UN Secretary-General said he continued to be humbled by the “selfless acts of the hibakusha, the name given to those who survived and continue to bear witness.

“Your courage in the face of immense human tragedy, is a beacon of hope for humanity”, he said in his address, delivered on his behalf at the ceremony by the UN High Representative for Disarmament Affairs, Izumi Nakamitsu.

“I reaffirm the full support of the United Nations to ensuring that your voices are heard by the world’s people, and especially by younger generations.”

Out of the ashes

The UN chief told the people of the city that was devastated in 1945, just days after the first bomb was dropped by the United States on Hiroshima during the final days of World War Two, that they had built a “cultural metropolis” out of the ashes.

“Your dynamic city exemplifies modernity and progress, while you work diligently to prevent devastation from ever befalling another city”, he said, warning however that the prospect of another nuclear weapon being used, were as dangerous now, as any time since the height of the Cold War between the US and former USSR.

“States are racing to create more powerful weapons, and broadening the potential scenarios for their use. Warlike rhetoric is turned up to maximum volume, while dialogue is on mute”, said the Secretary-General.

But two developments this year provide grounds for hope, in the form of the reaffirmation from the US and Russia, “that a nuclear war cannot be won and must never be fought”, together with a commitment to engage in arms control talks.

Secondly, said Mr. Guterres in his message, the Treaty on the Prohibition of Nuclear Weapons has now come into force, representing “the legitimate fears of many States, about the existential danger posed by nuclear weapons.”

And for the parties to the Nuclear Non-Proliferation Treaty, the UN chief said they all parties now need to reinforce “the norm against nuclear weapons” at the upcoming Tenth Review Conference, and take real steps towards elimination.

It is incumbent on all Member States of the UN, “to seek the abolition of the most deadly weapons ever made”, said Mr. Guterres, and together, we must prevent the tragedy of Nagasaki’s nuclear destruction, “from ever occurring again.