A declaration of Friendship between peoples

May 16 has been declared by the United Nations as the International Day of Living Together in Peace in order to “regularly mobilize the efforts of the international community in favor of peace, tolerance, inclusion, understanding and solidarity, and the opportunity for all to express the deep desire to live and act together, united in difference and in diversity, with a view to building a viable world based on peace, solidarity and harmony “. 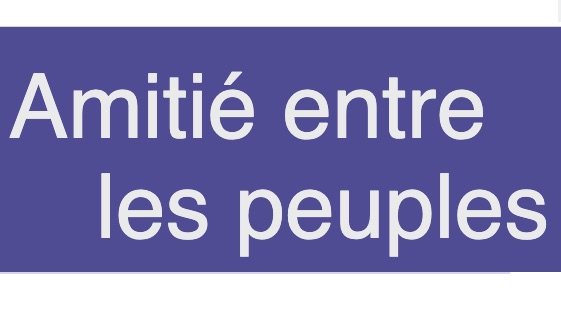 National situations are marked by acts of racism, intolerance, the development of violent and fascistic extremisms including terrorist acts, while the international situation sees the persistence of conflicts, the worrying rise of fascistic far-right movements, the growth world military spending which reached the amount never reached in the history of humanity of 2 trillion dollars in 2020. We are encouraged to give a more important place to this international day which is based on the fundamental principles of the United Nations Charter and the United Nations resolution on the Culture of Peace [see below], and more simply on the promotion of friendship between peoples.

Living together in peace means individually accepting differences, listening, showing esteem, respect and recognition towards others. However, these individual or collective attitudes and behaviors can only be fully effective if, at national and international level, economic, social, cultural and humanitarian policies are implemented to fully realize human rights (economic, social, cultural, etc.). environmental) for all without distinction of origin, sex, language or religion. At the same time, these policies must tackle all forms of discrimination affecting individuals or groups, development inequalities that exist within societies or between societies; and substitute for security based on power (in particular military) a collective security based on the realization of human rights.

It is on these foundations that the MRAP and the Peace Movement intend to strengthen their cooperation to participate in the construction of human security in its physical, economic, social, health and environmental dimensions which will promote living together in peace in allowing unification in action around humanist objectives while removing the specter of ideologies of hatred which feed on inequalities, discrimination and the absence or non-realization of human rights.

Article 3 of resolution 53/243 of the UN General Assembly on the Declaration and Program of Action on a Culture of Peace states that “The fuller development of a culture of peace is integrally linked to:

Promoting democracy, development and universal respect for and observance of all human rights and fundamental freedoms;

Enabling people at all levels to develop skills of dialogue, negotiation, consensus-building and peaceful resolution of differences;

Eradicating poverty and illiteracy and reducing inequalities within and among nations;

Eliminating all forms of discrimination against women through their empowerment and equal representation at all levels of decision-making;

Ensuring respect for and promotion and protection of the rights of children;

Ensuring free flow of information at all levels and enhancing access thereto;

Increasing transparency and accountability in governance;

Advancing understanding, tolerance and solidarity among all civilizations, peoples and cultures, including towards ethnic, religious and linguistic minorities;

Realizing fully the right of all peoples, including those living under colonial or other forms of alien domination or foreign occupation, to self-determination enshrined in the Charter of the United Nations and embodied in the International Covenants on Human Rights,2 as well as in the Declaration on the Granting of Independence to Colonial Countries and Peoples contained in General Assembly resolution 1514 (XV) of 14 December 1960.