A mass march and rally for peace and coexistence, organized by the movements “Standing Together” and “Breaking the Silence” took place on Saturday (May 22) in Tel Aviv. 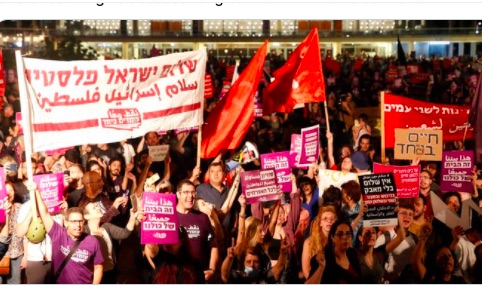 The marchers welcomed the ceasefire between Israel and Hamas, and demanded the government to end its occupation of the West Bank and to make peace with the Palestinians. Their chants included “This is all of our homes,” “We stand together without hatred and without fear,” and “The answer to the Right is Israel and Palestine,”

Ayman Odeh said, “People are speaking about the darkness that is descending on this country,” he said. “ I see light. I see a strong light. Jews and Arabs together will dispel the darkness. You are the light.”

The article in the Times of Israel quoted participants at the rallies who came to “hear different voices from what is in the media” and to see others who want peace and coexistence.

A similar rally with about 200 people took place on Saturday in Jaffa.

Also on Saturday, hundreds protested outside the Prime Minister Benjamin Netanyahu’s Residence in Jerusalem, blaming him for the escalation in Gaza and calling for his resignation.