An article from Excelsior

Chiapas Governor Rutilio Escandón Cadenas held a meeting with Rigoberta Menchú Tum, Nobel Peace Prize winner, in which he recognized her tireless struggle in favor of the dignity, defense, respect and unrestricted compliance with the human rights of indigenous and vulnerable peoples. 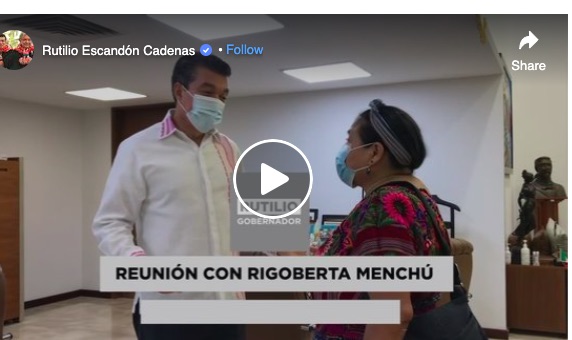 video of the meeting

During this meeting held at the Government Palace, the president expressed that Menchú’s example of work for those who need it most, coincides with the vision and will of his administration, to promote actions and projects that provide peoples and communities better opportunities for growth, progress and, above all, a better future for present and future generations.

In turn, Rigoberta Menchú described the work she does through the Menchú Tum Association towards a Culture of Peace and the Rigoberta Menchú Foundation. She expressed that her visit contributes to the relationship between Chiapas and Guatemala, since they not only share a border and a great cultural and natural wealth, but also concerns for well-being and development of their peoples.

The Guatemalan activist hoped that the actions promoted by the Government of Chiapas will continue to reflect a greater well-being of the population. She also expressed her thanks for the openness and availability of this type of friendly meetings.