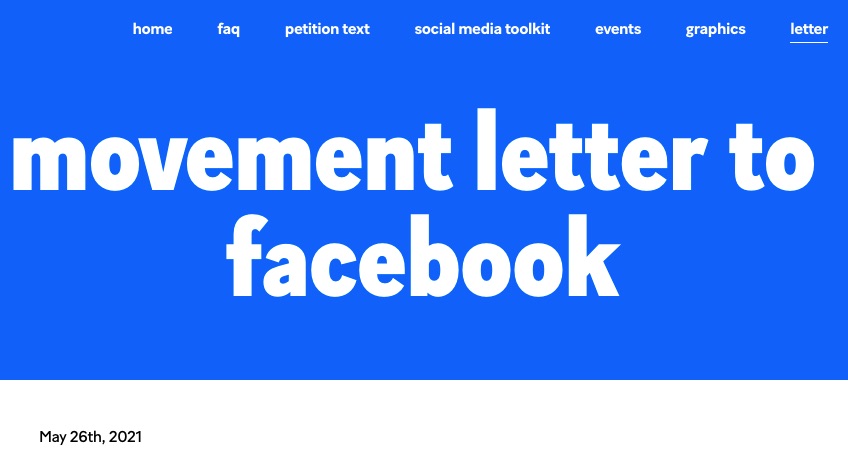 We write as civil society organizations in the United States, Palestine, and beyond, angered and disturbed by the recent censorship of Palestinian users and their supporters on your platforms. We are equally horrified by the high levels of inciting content directed towards Palestinians on Facebook’s platforms. At this moment, social media platforms like Facebook and Instagram are often Palestinian protestors’ and residents’ only tools to share information to keep each other safe in the face of repression by the Israeli government and police, and during attacks on civilians. These platforms also play a key role in Palestinian users and their allies in documenting Israeli government human rights violations, and sharing the images, videos, and accounts of the murder and violent dispossession of Palestinians being perpetrated by the Israeli government and Zionist Israeli settlers. This blatant censorship of Palestinian political content is putting these activists further at risk.

As Palestinian residents defend their homes in Jerusalem from forced dispossession by the Israeli government and state-sanctioned Zionist settler groups, their calls for support have received widespread international attention—inspiring social media campaigns and mass protests around the world. This international outcry only grew after the Israeli military attacked Ramadan worshippers at al-Aqsa mosque and started brutally bombing Palestinian civilians in the Gaza Strip —an ongoing onslaught that killed over 200 people, including at least 60 children. And the the international community continued to mobilize as, immediately in the wake of a ceasefire, Israeli police fired stun grenades on Palestinian worshippers at the al-Aqsa complex and embarked on a mass-arrest campaign of Palestinian citizens of Israel that has resulted in over 1,500 arrests targeting protestors.

Facebook executives’ decision at this moment to directly collaborate with Israeli Defense and Justice Minister Gantz on content moderation, without appropriate parity of government engagement until prompted by civil society, is beyond outrageous. Facebook may need to consult governments on various content and policy issues in its work; however, to coordinate with the Israeli government — which the United Nations and multiple human rights organizations have called an apartheid state — publicly in the middle of a military assault on Palestinian civilians in the Gaza Strip, attacks on Palestinian citizens in Israel, and forcible displacement of Palestinians in East Jerusalem is dangerous overreach at best.

In addition, the numerous reports of removal or chilling of political speech that several of our organizations have received over the past two weeks, combined with the report released by 7amleh last week that includes 429 reported incidents from Instagram and Facebook, raise concerns about Facebook’s relationship with the Israeli Ministry of Justice’s extra-legal Cyber Unit. The fact that since May 6 there has been widespread removal of Palestinians’ content or supportive content (including removal of content and deactivation of accounts or pages based on Community Standards violations, as well as the mass removal of Instagram stories) that after review have been restored for lack of any violation, indicates that Facebook is perhaps voluntarily agreeing to takedowns recommended by the Israeli Cyber Unit. This unclear relationship between Facebook and the Israeli Cyber Unit is concerning, as it is not subject to any formal governmental or legal process.

Such indications of Facebook’s privileged relationship with the Israeli government contradict the assurances that Facebook community engagement and content policy representatives have repeatedly made to those of us that have engaged in good faith as stakeholders in Facebook’s content policy process, specifically over the past six months around Facebook’s possible reinterpretation of “Zionist.” When expressing concern that current or future policies (such as those stifling criticism of “Zionists” or “Zionist” institutions) would silence Palestinians and those of us organizing to hold the Israeli government accountable, we have often been assured that Facebook does not have a privileged relationship with the Israeli government —that our concerns are unfounded. Given Facebook’s decision to collaborate with the Israeli Ministry of Defense and Justice, the possible relationship between Facebook and the Israeli Cyber Unit, and The Intercept’s recent investigation regarding Facebook’s content moderation rules silencing criticism of Israel, our communities’ mistrust of the company is increasing.

Facebook must take the following urgent and crucial steps to repair this mistrust with our communities and ensure that we can count on Facebook and Instagram as free civic spaces and tools for holding governments accountable:

Urgent action is required from Facebook to examine its complicity with the Israeli government’s apartheid and ethnic cleansing policies. We urge you to reply to this letter publicly and engage with us immediately.

(Continued in the column on the right.)

(Continued from the column on the left.)

7amleh – The Arab Center for the Advancement of Social Media

Action Center on Race and the Economy (ACRE)

Fight for the Future

For Us Not Amazon

National Students for Justice in Palestine

The Palestine Institute for Public Diplomacy

We Are Not Numbers