An article from BFM TV (translation by CPNN)

Tens of thousands of people demonstrated this Sunday in Paris for a more ambitious climate law , while doubts are emerging on a referendum to include the fight against climate change in the Constitution. 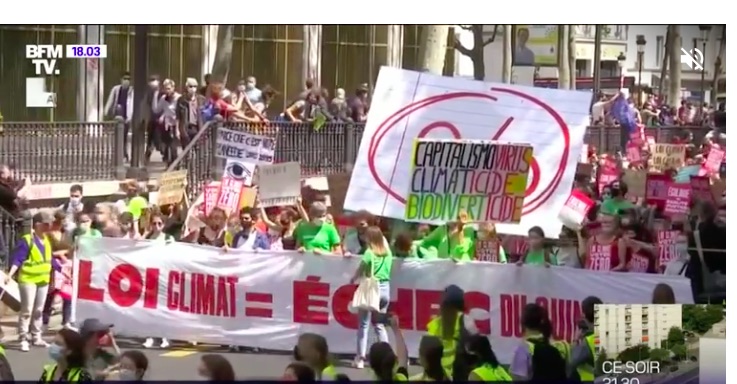 Frame from video of BFM TV

The demonstrators gathered behind a banner “Climate law = failure of the five-year term.” They marched from Place de le République to the Bastille via Châtelet.

Emmanuel Macron committed in front of the members of the Citizen’s Convention for the Climate (CCC) to send to parliamentarians their proposal to modify Article 1 of the Constitution but, faced with the reluctance of the Senate on the wording (the text must be voted on in the same terms by both chambers to be able to be submitted to a referendum), the JDD affirms that the president has renounced the ballot.

The Elysee assured that the constitutional amendment was “in no way buried”, without however mentioning a referendum.

“What I am the guarantor” is that “there will be no abandonment. This text will live its parliamentary life, which alone allows to go to the referendum if the senators and the deputies agree “, then insisted the Head of State, on the sidelines of a trip to Strasbourg .

“A missed meeting for the climate”

Despite Elysian assurances, ecologists, left parties and unions saw it as further proof of the denials of the executive, even as they demonstrated to denounce as “a failed meeting for the climate” the law “climate and resilience” adopted Tuesday in the Assembly .

A text meant to translate part of the 149 proposals of the CCC, convened by Emmanuel Macron in the wake of the crisis of the “Gilets Jaunes” to reduce French greenhouse gas emissions by 40% “in a spirit of social justice”.

According to the organizers, 115,000 people in total participated in 163 parades across the country, including 56,000 in Paris, a little more than claimed during the previous movement at the end of March, just before the start of the review of the climate law. Police counts were not immediately available.

“It is a question of continuing to denounce the lack of ambition of the climate law and, since this morning, the almost certain abandonment of the referendum which constitutes a further step backwards”, summed up the director and activist Cyril Dion, “guarantor “of the CCC, present in the last Parisian procession with a banner” Climate law = failure of the five-year term “.

The right has accused the head of state of “hypocrisy”, against a background of tension around the next regional and attempted macronist takeover on the moderate right electorate for 2022.

“Even before the Senate has voted anything and the discussion with the National Assembly begins, Emmanuel Macron accuses us of blocking to justify the cancellation of a referendum he did not want”, tweeted senator leader LR Bruno Retailleau.