Excerpts from the blog of the United National Antiwar Coalition

by Yara Hawari, published on Consortium News, April 8, 2021 The People-to-People (P2P) framework, which refers to projects that bring Palestinian and Israeli civil society actors together in so-called cooperation and dialogue, has been revived among donor-funded initiatives in Palestine. Emphasizing notions of cooperation, understanding, and peace building, P2P is promoted as a positive framework at a time when the[…READ MORE] 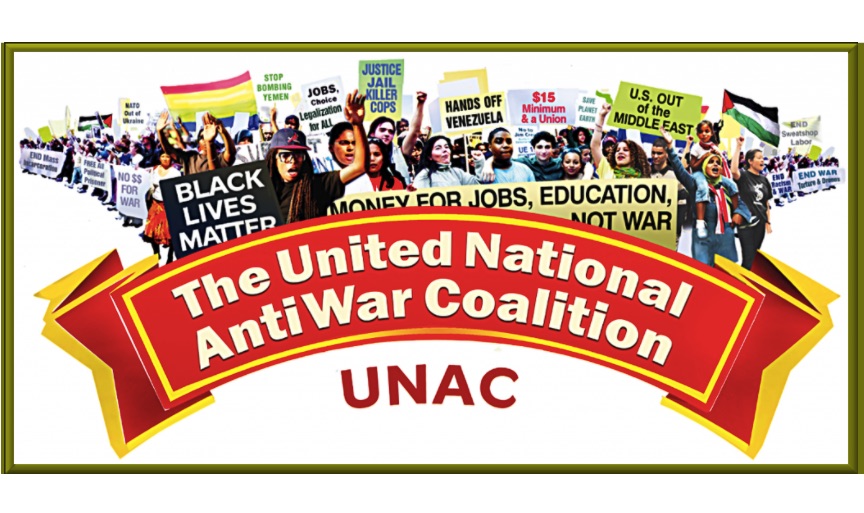 Cancelling the KXL Pipeline: A Victory for the Working Class & the Environment! The Trans Mountain (TMX) Pipeline is Next! by Alison Bodine, published on Fire This Time Magazine, April, 2021 On January 20, 2021, U.S. President Biden’s first day in office, he cancelled the Keystone XL (KXL) pipeline by rescinding a Presidential permit required to complete construction at the[…READ MORE]

by Sara Flounders, published on International Action Center, April 12, 2021 We salute Ramsey Clark, who died April 9, 2021, an outspoken defender of all forms of popular resistance to oppression, a leader always willing to challenge the crimes of U.S. militarism and global arrogance. He remained optimistic that the power of people could determine history. His courageous voice will[…READ MORE]

by Margaret Kimberley, published on Black Agenda Report, April 7, 2021 Slow-witted Joe Biden appears to think that we’re still in the age of the sole superpower, when in fact that era has come and gone. “China’s Belt and Road Initiative involves countries on every continent and provides opportunity where the western nations offer only debt and subjugation.” As this columnist[…READ MORE]

By Mike Elk, published by Labor Today, April 9, 2021 Today, the union drive at Amazon in Alabama, which drew unprecedented political and media attention, was defeated by a 2-to-1 margin. Last month, as we stood in the parking lot of Amazon’s warehouse and spoke with 32-year-old Ashley Beringer about her take on the Amazon union vote, it became apparent[…READ MORE]

by Scott Williams, published on Workers World, April 2, 2021 “The workers in Bessemer never thought they’d spark a national discussion. This is their moment, but it’s not just about Amazon. This is about every employer and the right of every worker to fair pay, safe workplaces, a voice in their workplace and the right to organize unions without illegal[…READ MORE]

by Sara Flounders, published on Workers World, April 6, 2021 On Feb. 29, 2020, after rounds of negotiations in Doha, Qatar, with the Taliban — the insurgency they have fought for 20 years — the U.S. signed an agreement to withdraw from Afghanistan all U.S. and NATO forces within 14 months — by this May 1. In return the Taliban[…READ MORE]

by Pam Africa, published on Bayview Newspaper, March 28, 2021 As you can see from our petition, we have been seeking to approach Larry Krasner diplomatically. In our effort to attract the widest possible range of supporters, we have written the petition with polite language. We are trying to give DA Krasner the benefit of the doubt by considering the possibility[…READ MORE]

by Margaret Flowers, published on Popular Resistance, March 28, 2021 As I traveled in Nicaragua on the recent Sanctions Kill delegation, one thing was clear, social transformation (revolution) requires both political power and participation by the people. Without political power, revolutionary programs will not have the material resources they require. Without the participation of the people, revolutionary programs, even with[…READ MORE]

by Luis Sifuentes, published on Fightback News, April 2, 2021 The LAPD recently shot six people in seven days. We also saw them unleash their violence last week in Echo Park against the unhoused community and allies, then call it a “service to the community.” And they’re trying to use their violence during last summer’s protests to secure more resources[…READ MORE]