350 teams from across the globe share their reactions to Bidens Leaders Summit.

40 world leaders gathered to participate in the Biden Administration’s first step onto the international climate stage. The Leaders Summit on Climate took place on April 22nd/ 23rd. The summit saw global leaders making big promises on carbon emission reduction, but the biggest red flag from climate activists is the overall lack of explicit commitments to stop financing fossil fuel projects, one of the key areas that can speed up the transition away from fossil fuel energy. 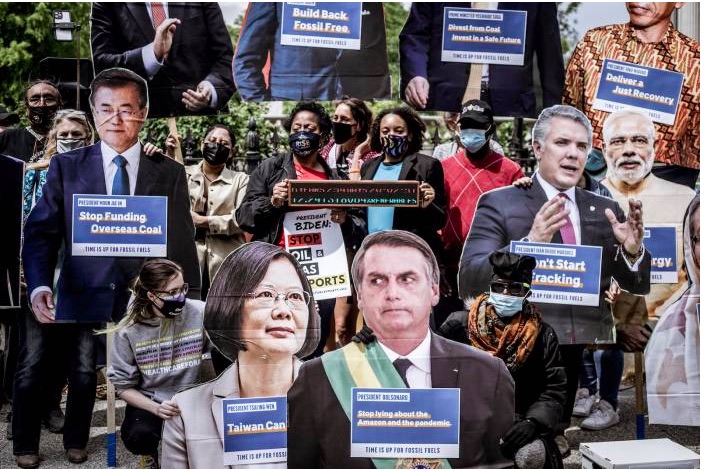 “There can be no meaningful climate action if world leaders don’t make a decisive move to keep all fossil fuels in the ground. It’s one thing to make climate goals, but governments simply can’t afford to keep on funding the flames by pouring money into subsidizing coal, oil and gas. The Biden Summit is a critical meeting of world leaders ahead of COP26 this November. Talk of “net-zero” emissions won’t cut it: we demand more from our world leaders than the false promises, false solutions and empty negotiations we heard at Biden’s Climate Summit. The task now is to hold politicians to their lofty words,  and to do that the global climate movement needs to keep up the pressure on our governments at home as well as on the international stage to take urgent action now to reduce carbon emissions and ensure a Just Recovery from the global COVID-19, economic and climate crises by creating a sustainable, fossil-free world ”.

“In a world recovering from COVID-19 and the climate crisis, governments need to quickly divest from the fossil fuel industry and begin investing in a just recovery for all. Countries with high emissions, such as the United States and Australia, must stop subsidizing oil, gas and coal and direct their investments toward clean and just renewable energy so that we can limit Earth’s warming to 1.5 degrees.

To date, Australian Prime Minister Scott Morrison has not announced a concrete plan to reduce emissions. Instead, he thinks that fossil fuel companies can solve the climate crisis, which is a massive irony. The Summit is an excellent opportunity for him and other leaders to look on the leadership of the Marshall Islands – the only Pacific island nation present. Australia must recognize that they have few options: either catch up by COP26 or remain a climate laggard who contributes to climate disaster.”

“This goal is highly insufficient if we want to achieve the Paris Agreement’s goal of limiting the warming of the Earth to 1.5 degrees. I strongly urge the Japanese government to set a more ambitious target with a minimum of a 62% reduction from 2013’s emissions. This is based on research published by Climate Action Tracker.

This target may be higher than previously at a 26% reduction, but if we look closely – this is a numbers game1. Compared to the United Kingdom’s and European Union’s targets, which are 78% in 2035 and 55% in 2030 respectively compared to emission levels in 1990, Japan’s target is much lower.

When the Paris Agreement was signed, we agreed that there were “common but differentiated responsibilities” across the world. As the world’s fifth-highest emitting country with a large amount of historic emissions, Japan owes the world a carbon debt. This makes it necessary for our country to reduce as much carbon emissions as possible — or more than half of 2010’s emissions in order to be a solution to the climate crisis. We must start urgently setting bold and ambitious targets, and strengthening the measures necessary to achieve them.

One of the policies urgently needed is a rapid phase out of coal infrastructure. Another to direct Japanese banks to rule out fossil finance. Japan is the biggest lender to the global coal industry, and they must cut the flow of money to reduce their emissions.

Only if Japan government walks the talk, can they show climate leadership.”

“We are heartened by the Chair’s response and his ambitious goals of targeting a 100% renewable transition by 2050. For Bangladesh to have a just recovery from the twin crises of COVID-19 and climate change, this transition away from coal must exclude gas, and bring about a Green New Deal focusing on clean and just energy such as solar and wind. At the upcoming Leaders Summit for Climate, we hope to see countries that have built their wealth based on fossil fuels such as the US working hand in hand with most affected countries such as Bangladesh. World leaders must start cooperating and sharing resources to combat the climate crisis. They need to act now, while there is still time.”

“During the virtual summit, the world’s major economies will share their efforts to reduce emissions during this critical decade to keep a limit to warming of 1.5 degrees Celsius within reach.

1.5 degrees is our global beacon for climate action. The safety and wellbeing of millions of Africans depends on keeping below it. But it is slipping from our grasp and we need to urgently halve global emissions by 2030, which means that we need to limit fossil fuel consumption and stop new developments such as the EACOP and Mozambique LNG projects that threaten this climate ambition.

Fixing the climate crisis requires more than simply cutting carbon; we need bold action that prioritizes alternative sources of energy that meet the needs of the people and accelerate investments in real climate solutions with the aim of driving a fast and sustainable transition away from fossil fuels.”

The problem with Justin Trudeau’s new climate pledge can be summed up in two words – fossil fuels. Neither Trudeau’s new climate plan, nor his budget, nor this new climate promise include a plan to tackle soaring emissions from tar sands, fracking and other fossil fuel expansion that makes Canada the only G7 country whose emissions have gone up since signing the Paris Agreement. Canada needs to cut our emissions at least 60% by 2030 and pass legislation like a Just Transition Act to make sure we meet our Paris commitment and leave no one behind.

Since Justin Trudeau won’t act at the pace and scale of the climate emergency, we need the NDP and the Greens to form a Climate Emergency Alliance ahead of the next election to push Canada to set ambitious targets and follow through with the policies to meet them. It’s not too late for Canada to do what’s necessary, but we can’t afford four more years of Trudeau’s status quo”.

“On Day 1 in office, Biden canceled Keystone XL. Now he must follow through on his promises and do the same with Line 3, the Dakota Access pipeline, and all new fossil fuel projects. A 50% emissions reduction falls short of the United States’ fair share, and should be seen as the floor, not the ceiling. Ambitious climate action requires keeping all fossil fuels in the ground. Biden must show the world that the U.S. is serious about tackling the climate crisis at scale, centering communities most impacted, and creating millions of good, green jobs in the process.”

“Bolsonaro lied when he said that Brazil is at the forefront of the climate efforts. It may have been true someday, but not in his government, which has been consistently attacking the policies and state agencies necessary to stop deforestation and lead the energy transition. He talked much about the past achievements of Brazil and too little about the future, not to mention that in the present, his environmental record is a disaster.”

“In the days before the Climate Summit, there was an impressive flow of open letters and social media campaigns in Brazil asking President Biden not to close any agreement with President Bolsonaro without hearing the Brazilian civil society first, and it seems to have worked. There is a very justified concern, based on the current attitude of the Brazilian government towards the environment, that no matter what the Bolsonaro government promises, it will be just empty words, and that an agreement with the US would end up endorsing the destruction of the Amazon and other biomes.”

“Brazil has the potential to be a global leader in the efforts to solve the climate crisis, and in fact it has been a very important voice in this conversation for many years, since the Rio Earth Summit in 1992. However, the Bolsonaro government shrank Brazil’s ability to take climate action, by dismantling major policies against deforestation in the Amazon and threatening conservation in Indigenous Lands and Protected Areas. The key to take Brazil back to its leading role in the climate efforts is to empower and support the civil society, especially Indigenous leaders, and strengthen community-based solutions as opposed to ignoring or even encouraging the irresponsible expansion of mining and agribusiness, as President Bolsonaro has been doing”, said Ilan Zugman, Latin America Managing Director of 350.org.

“What stood out in President Fernández’s speech was the fact that he did not mention any change in the government’s policies of investment in the expansion of oil and gas extraction in the Vaca Muerta area. Taxpayers’ money has been subsidizing a highly ineffective and environmentally harmful operation, which benefits a few foreign companies and brings no development to the country or even the region where it is based. These billion dollars wasted every year in fossil fuels should be redirected to policies of the energy transition, that are able to create more jobs in a moment when Argentinians desperately need it”, said Ignacio Zavaleta, 350.org Campaigner in Argentina.