An article from the Pulitzer Center

NKALA, Congo —  Amid a dawn chorus of crickets, mosquitoes and the “jee-ow!” of the great blue turaco, the forest canopy began to shake as a screech rang out.

Peering up through his binoculars, Nioka Monsiu spotted a pair of young bonobos tumbling in the treetops under the eye of their mother.

“Before, these species were menaced and hunted to near extinction,” he said. “But we protect them here in our forest.” 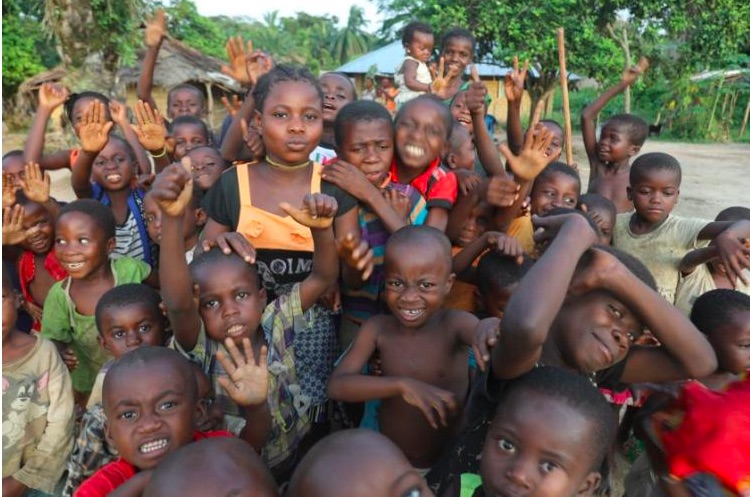 That protection is part of an experiment unfolding here in the Congo Basin: giving power to the people in an attempt to preserve the world’s second-largest rainforest.

Deforestation rates have accelerated over the last decade, raising fears that the Congo Basin could one day suffer the fate of the Amazon rainforest, which has been devastated by logging and slash-and-burn agriculture.

The research initiative Global Forest Watch found that since 2010, nearly 11 million acres of primary forest — the oldest, densest and most ecologically significant kind — have been lost in the Congo Basin to logging, agriculture, mining and oil drilling. That’s roughly triple what was lost in the previous decade.

Experts say that if nothing is done, the more than 400 million remaining acres — which stretch across six countries in Central Africa — will disappear by the end of the century.

There is time to head off disaster. The Democratic Republic of Congo has become the focal point of conservation efforts, because nearly 60% of the forest falls within its borders.

In early 2016, the government passed a law setting aside an estimated 185 million acres of forest — it did not specify how much is primary forest — to distribute to individual villages, with the expectation that local ownership leads to sustainable management.

“We believe that strengthening the rights of forest communities will be an effective way of both protecting rainforests and fighting poverty,” said Fifi Likunde Mboyo, who heads the program at Congo’s Ministry of Environment.

The village sits 150 miles northeast of the capital, Kinshasa; reaching it requires driving for three days on unforgiving dirt roads or taking a narrow, wooden boat up the Congo River. For the people there, trapping wildlife in the forest has long been a way of life.

“Our grandparents used to live off hunting and fishing, but they did it too much, and they left us with almost nothing,” said Kinzoma Gaspard, the village chief.

In recent decades, outsiders have played a greater role in exploiting the region’s natural resources.

“Foreign logging companies used to come with the permission of the government, but without our permission, and yet cut down our forests,” said Paulin Ebabu, a village elder.

Under the community forest program, a local conservation group and the regional government helped the village decide how to divide its land between protected areas — where the forest can regenerate, and wildlife goes untouched — and development areas, where small-scale agriculture and hunting are permitted. The concession is managed by 11 elected villagers.

The bonobos are a big part of the plan. Last year, 30 tourists each paid $100 for up-close, guided encounters with the endangered great apes. The COVID-19 pandemic has stalled efforts to draw more visitors.

Monsiu, 28, is one of a dozen trackers. Trained by the World Wildlife Fund, the trackers follow the bonobos every day to monitor their health and behavior, as well as keeping tabs on their location, in order to hike in with tourists for visits. Each tracker earns $150 a month, a good income in a country where 72% of people live on less than $1.90 a day. For now, the WWF pays most of the salaries, but the hope is to eventually draw enough tourists to make the project self-sustaining.

Another part of the forest has been set aside to grow arrowroot trees. Women use the leaves to make mats, which they sell in nearby towns through a newly formed cooperative.

“My grandparents did it too,” said Hortense Wasa-Nziabo, a 21-year-old artisan. “It’s our heritage, and now it’s what nourishes us.”

Nkala has also diversified its crops, adding peanuts, corn and pineapples to its plantations in an effort to improve nutrition and protect the food supply from droughts and uneven rains. The WWF helped build a mill to turn cassava, a hearty root vegetable, into flour.

Villagers speak with pride about the changes and say their living standards are rising, though the project is still in its early stages and remains highly dependent on investment by outside groups.

The fate of the rainforest matters not only for villages like Nkala but for the world’s climate. Forests are major carbon sinks, and only the Amazon stores more than the Congo Basin.

Environmentalists view local ownership and management as a small but significant part of the solution to saving the rainforest.

“If the blueprint can be applied across the country, a huge source of deforestation would be eliminated,” said Innocent Leti, regional coordinator for Mbou-Mon-Tour, a Congolese nonprofit that helped Nkala develop its land-use plans.

But whether that can be achieved is a big question mark. The vast majority of the land set aside for villages has yet to be allocated. Many remote communities don’t know about the law, and even if they do, navigating the legalities to obtain concessions requires close technical support from provincial officials and outside organizations.

“We don’t have the capacity to help everyone,” said Inoussa Njumboket, a program officer for WWF in Congo who has worked in Nkala and the surrounding villages since 2010. “What value does that land have if the community doesn’t have the basic resources to take advantage of it?”

Even in Nkala, which is widely touted as a success, there have been problems. Unemployed villagers have been found hunting in protected territory, and there have been disputes among communities over resources.

“Women from other villages have been coming to our stream and taking our fish,” said Mafi Esefa, who collects wood and cassava leaves from the forest near Nkala to sell in other villages.

Still, her overall assessment is positive.

“The system works well,” she said. “It’s allowed me to become a businesswoman. It’s given me freedom.”

This story was supported by the Pulitzer Center.