A synthesis by CPNN based on recent articles in The Africa Report (based in Paris), This Day Live (Nigeria), The Herald (Zimbabwe), The Independent Online (South Africa), Euractiv (Belgium), Southern Times (Namibia), and the United Nations News Service quoted here in CPNN

In March 2018, African countries signed a landmark trade agreement, the African Continental Free Trade Area Agreement (AfCFTA), committing the countries to remove tariffs on 90 per cent of goods, progressively liberalise trade in services, and address a host of other non-tariff barrier.” Following a summit of AfCFTA in December 2020, the agreement began operation on January 1, 2021. 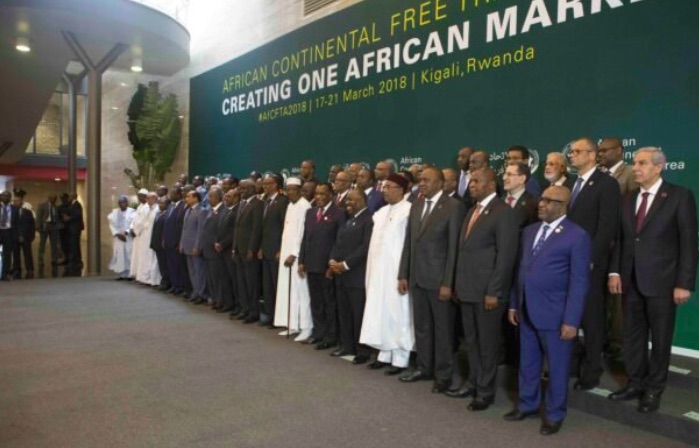 This may become an important contribution to the culture of peace. According to The Africa Report , “The AfCFTA, if well implemented, would no doubt transform conflicts across the continent by reducing the incentives for participating in conflicts, via the creation of jobs.”

Addressing the recent AU Summit of Heads of State and Government, incoming President Tshisekedi said his priorities would be tackling the COVID-19 pandemic, accelerating the operationalization of the African Continental Free Trade Area (AfCFTA) and fostering peace and security on the continent.

The agreement has the potential to promote women’s equality in Africa. In remarks to the AU Summit, outgoing President Cyril Ramaphosa stated that AfCFTA should ensure financial inclusion of women for the trade pact to deliver sustainable and meaningful development. As cited by the Southern Times, President Ramaphosa said state parties would report annually on progress made in strengthening women’s participation in continental trade matters. “This includes tailor made financial products for women with reliable means to save, access, transfer and borrow money,” he expounded. “As the AU, we should also develop a decade action plan to help member states develop key flagship activities towards women’s economic empowerment.” He called for a “women-led Peace Forum to be attended by Heads of State and Government and to implement decisions of the Peace and Security Council to institutionalise the office of the special envoy on women, peace and security.”

According to the World Bank, as quoted in This Day Live, the . . . agreement will create the largest free trade area in the world measured by the number of countries participating. “The pact connects 1.3 billion people across 55 countries with a combined gross domestic product (GDP) valued at US$3.4 trillion. It has the potential to lift 30 million people out of extreme poverty, but achieving its full potential will depend on putting in place significant policy reforms and trade facilitation measures.

“The scope of AfCFTA is large. The agreement will reduce tariffs among member countries and cover policy areas such as trade facilitation and services, as well as regu­latory measures such as sanitary standards and technical barriers to trade. Full implementation of AfCFTA would reshape markets and economies across the region and boost output in the services, manufacturing and natural resources sectors.

This will be a major change because at the present time as indicated by According to The Africa Report, intra-African trade accounts for only 18% of overall trade across the continent.

In a related development, the newly-elected head of the World Trade Organization is an African woman, Dr. Ngozi Okonjo-Iweala. As indicated by The Herald (Zimbabwe), “For strategic reasons, the appointment could not have come at a better time for Africa . . . With an anticipated economic boon following the operationalisation of the African Continental Free Trade Area (AfCFTA), the continent stands in a better position to lobby for an increase in its world trade share because it can now do so as one single unit and get a sizeable share.”

According to This Day Live, “The rubrics, goals and objectives of the AfCTA aren’t incompatible in anyway with those of the WTO, and Dr. Okonjo-Iweala could help pilot it towards more support for the continent. That could be in offering technical help, trade analysis and policy expertise, turning the dream of free trade across Africa into reality. In addition, she will possess the moral capacity to pressure African political leaders to design and implement sensible trade policies that support growth.”

AfCTA is a major component of Agenda 2063, the 50-year master plan established by the African Union. As described in the Southern Times, the Agenda also includes “the construction of an integrated high speed rail network connecting African capitals; the formulation of an African commodities strategy that unlocks the value of our resources, and creates value chains based on local value addition; and the realisation of an African passport for promotion of free movement of people across our continent. Other flagship programmes are development of 43,200MW Grand Inga Dam; a single African air transport market; and establishment of African financial institutions such as the African Investment Bank, Pan-African Stock Exchange, the African Monetary Fund and the African Central Bank.”

China and the European Union, major trading partners with Africa, have welcomed the AfCTA. The new Ambassador-designate of the People’s Republic of China to South Africa, Chen Xiaodong, as quoted by Independent Online, stated, among other things, that the AfCTA can contribute to peace and to sustainable development. “China and Africa fought side by side against imperialism, colonialism and apartheid, and the yearning for peace has long been in the blood of the Chinese and African people. The AU Agenda 2063 emphasises that Africa shall realise peace and security, and Africa’s road to modernization is bound to be one of peaceful development.” “The AU Agenda 2063 advocates building a prosperous Africa based on inclusive growth and sustainable development, which speaks volumes about Africa’s pursuit of harmony between man and nature in its modernization process.”

In a new report adopted on 28 January, as quoted by Euractiv, the European Union called for “long-term EU financial and technical support for African countries to boost climate adaptation; EU support for African regional integration to help reduce dependence on foreign imports; and for the EU to support the new African continental free trade area which was launched in January.”