The 34th Session of the African Union Summit ended on 7 February 2021 with the new Chair, President Felix Tshisekedi of the Democratic Republic of the Congo (DRC), outlining an ambitious agenda for the year. 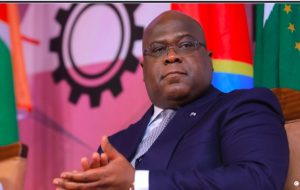 Félix Antoine Tshilombo Tshisekedi, President of the Democratic Republic of the Congo.

Addressing a virtual gathering of fellow heads of state and government at the two-day summit, President Tshisekedi said his priorities would be tackling the COVID-19 pandemic, accelerating the operationalization of the African Continental Free Trade Area (AfCFTA) and fostering peace and security on the continent.

The theme for this year’s summit and the rest of 2021 is Arts, Culture and Heritage: Levers for Building the Africa We Want.

President Tshisekedi stressed that “Arts, culture and heritage constitute the basis for African renaissance” and afford an opportunity to “look back at our roots.”

He added: “Culture is the beginning and the end of everything; it covers every aspect of human life.”

Before handing over the reins of the rotating chairmanship of the AU, President Ramaphosa remarked that Africa, like the rest of the world, was confronting a pandemic that is exacerbating inequalities and threatening the achievement of the 2030 Agenda for Sustainable Development.

Africa’s recovery requires debt relief, new funding and debt deferment, Mr. Ramaphosa said, and called for “an injection of fresh resources by the IMF through reallocating and issuing new special drawing rights, with a bias towards the developing world.”

The South African leader said that was necessary to “correct glaring inequalities in fiscal stimulus measures between advanced economies and the rest of the world.”

He highlighted several mechanisms that can help Africa succeed in its development aspirations, among which are the AfCFTA, which will help drive trade, investment and job creation, and enable a stronger and faster recovery.

Another mechanism is the “Silencing the Guns” campaign, which has been extended to 2030, and now consists of a roadmap and practical steps to achieve its objectives. There will be a two-year periodic review of implementation.

The AU-declared Decade of Women’s Financial and Economic Inclusion (2020-2030) is expected to support women’s access to financial services, he said.

“We are committed to developing African solutions to African problems,” Mr. Ramaphosa added.

On his part, Mr. Tshisekedi bemoaned insecurity in some parts of Africa. He listed The Sahel region, Central African Republic (CAR), eastern DRC, and northern Mozambique as some of the places currently affected by varying levels of insecurity.

The Summit also witnessed the re-election for a second term of the AU Commission (AUC) Chairperson Moussa Faki Mahamat. “I am deeply humbled by the overwhelming and historic vote of confidence,” Mr. Mahamat tweeted after his victory.

A highlight of the Summit was the election of Monique Nsanzabaganwa as the AUC’s first-ever female deputy head.  Before her elections she was the deputy governor of the National Bank of Rwanda.

The new US President Joe Biden delivered a special video message to African leaders, his first to an international gathering since assuming office.

President Biden said: “The United States stands ready now to be your partner, in solidarity, support and mutual respect.”

In his response, the AUC Chairperson Mr. Faki said he was looking forward to “resetting the strategic AU-USA partnership,” signaling renewed multilateralism in addressing global challenges after an apparent frosty relationship with the previous US administration.

On his first day as president, Mr. Biden lifted the ban imposed by the Trump administration on travelers from many African countries, including Eritrea, Libya, Nigeria, Somalia, Sudan and Tanzania.

UN Secretary-General António Guterres congratulated Mr. Faki on his re-election, saying that, “You can count on my support to continue building on the successful partnership between the AU and the UN, rooted in shared values and mutual respect.”

Before the Summit, Mr. Faki took stock of the significant achievements of his first term, including the establishment of the AfCFTA in March 2018 and the launch that year of the Single African Air Transport Market (SAATM) or “Africa’s Open Skies,” which liberalizes Africa’s airspace.

He said progress had also been made in efforts at resolving the conflicts in Somalia, South Sudan, the CAR and the Sudan.

In his next term, Mr. Faki intends to focus on “Silencing the Guns” in conflict countries, promoting the AfCFTA, empowering women and youth, strengthening ties with strategic partners, among others.

“Africa and Asia, Africa and Europe, Africa and America—how can we not be proud that our continent is today at the centre of these immense geostrategic entities?” he posed.

[Editor’s note: Tshisekedi also confirmed the AU participation in the 2nd Biennale of Luanda on the Culture of Peace to be held in Angola in 2021.]