[Prefatory Note: The post below consists of my responses to questions posed by Merve Ayadogan of the Anadolu Agency in Turkey, focused on the significance of the B’Tselem Report that recently concluded that Israel imposes an apartheid regime to sustain Jewish supremacy on both Israel itself and the all of Occupied Palestine. The Published version on Februrary 3, 2021 was crafted for the readers of the news agency.] 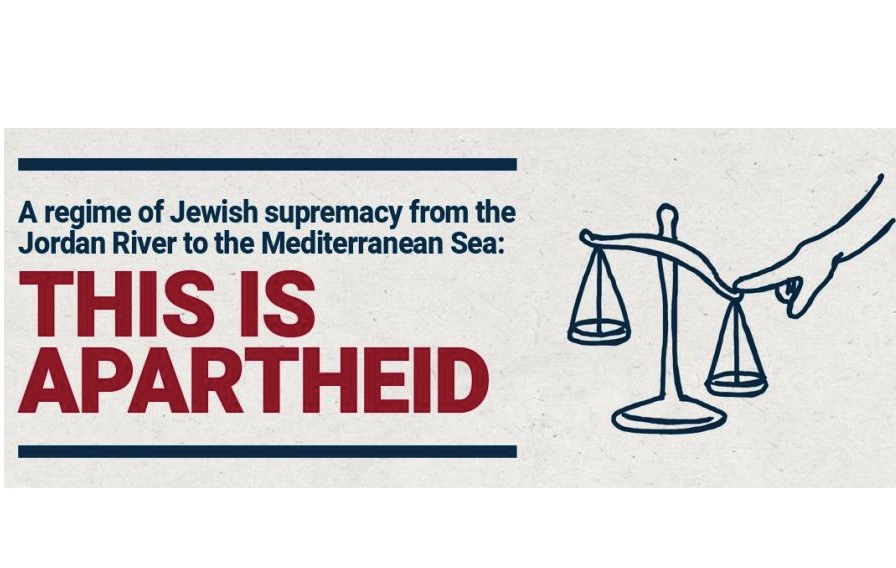 Q 1: An Israeli human rights group, B’Tselem has labelled Israel as an “apartheid state” over its policy of favoring Jews over the Palestinians earlier this month. How would you comment on this declaration? Could it ease the Israeli aggression on Palestinians?

It is definitely an important development when Israel’s most respected human rights organization issues a report that confirms earlier UN reports and allegations that the Palestinians are victimized by an apartheid regime that seeks to impose policies and practices that ensure the supremacy of Jews by victimizing the Palestinian people throughout the whole of historic Palestine. Such a de facto one-state reality of unified Israeli control suggests that the internationally endorsed goal of a negotiated two-state solution has been superseded by Israeli ambitions to complete the Zionist project of establishing a Jewish exclusivist state on the entire  ‘promised land’ of ‘biblical Israel.’ These ambitions were implicitly acknowledged by Israel in 2018 when it enacted a Basic Law that asserted that only the Jewish people had a right to self-determination within the state of Israel, that the internationally unlawful settlement enterprise deserved national support, and that Hebrew was the only official language. Not only were Palestinians being subordinated despite being citizens, but so were Druze and Christian minorities.

It should be appreciated that ‘apartheid’ is listed as a Crime Against Humanity in Article 7(j) of the Rome Statute governing the activities of the International Criminal Court in The Hague. Although the crime of apartheid is derived from the South African racist regime that proudly declared itself to be a governance structure based on apartheid ideas of separate and unequal development, it has become a generic crime given an authoritative definition in the 1976 International Convention on the Suppression and Punishment of the Crime of Apartheid. The Government of Israel, especially in international settings such as the UN, is outraged by allegations of apartheid that it repudiates as nothing other than a vicious form of anti-Semitism. The internationally acclaimed Israeli journalist, Gideon Levy, writing in Haaretz, goes beyond the B’Tselem Report in his insistence that Israel plus the territory it occupies is an apartheid regime: “The reality of apartheid and Jewish supremacy from the Jordan River to the sea is hidden only from the blind, the ignorant, the propagandists and the liars.”

One of the contributions of the Report is to identify the elements of Israeli apartheid by reference to specific policies and practices that are relied upon to maintain Jewish supremacy over non-Jews within its sovereign territory. Among these are discriminatory standards applicable to immigration, giving Jews worldwide an unrestricted ‘right of return’ while denying Palestinian any immigrations rights even if parents or grandparents were born within its territory. Other important instances of discrimination based on ethnicity concern land tenure, citizenship and nationality rights, freedom of mobility, security of residence, administration of law, and issuance of building permits. It is clear that these apartheid features vary from domain to domain, from Israel proper to East Jerusalem, West Bank, and Gaza, but the core undertaking is stable: exploitative domination by Jews over non-Jews, especially Palestinians.

There is one mysterious weakness in my reading of the B’Tselem Report: the erasure of seven million or so Palestinian refugees and involuntary exiles. The Report deals with apartheid. only in the context of the control of territory rather than its deliberate and intended design of exerting control of people, and yet from 1948 to the present, Palestinians have suffered as a people, whether subject to Israeli territorial control or not, with hundreds of thousand  being displaced and dispossessed from 1948 onwards as integral to the

Israeli overall plan to be a Jewish majority state that could lay a legitimating claim to being a democracy. In effect, ‘ethnic cleansing’ was a necessity, given Israel claims to legitimacy as a democracy. Palestinian forced to abandon their homeland by becoming refugees or exiles are at least as much a victim of apartheid as are Palestinians living under Israeli territorial control.

I have no reason to believe that Israel will act more humanely toward Palestinians as a result of the B’Tselem Report, but will condemn the report, as has already happened, as an instance of ‘Jewish anti-Semitism.’ As with BDS, Israeli first defenders will deliberately confuse criticism of criminally unlawful governing policies in Israel with hatred of Jews. A peaceful and secure future for both peoples will not arise until Israel dismantles apartheid and agrees to treat Palestinians in accordance with human rights standards, including respect for the Palestinian right of self-determination, as well as a genuine endorsement of racial equality.

Q 2: Despite pledging a new beginning in the Middle East, during Obama-era we saw a rise in conflicts and emerge of Daesh terror. Then came the Trump administration and we saw an atrophy in US-Palestine relations due to former president’s controversial decisions in favor of Israel. Now the newly-elected US President Joe Biden has directed his administration an immediate renewal of relations with Palestine and its people, what do you think of Biden administration’s policy regarding Palestine, the Middle East and wider region? Could we expect an “unseen” US policy for the region?

It is basically too early to tell whether the Biden presidency will do more than roll back some of Trump’s extremist moves. My best guess would be continuity with the approach to Israel/Palestine taken during the Obama period, with the special relationship fully reaffirmed, and Israel protected against censure and nonviolent pressures of the sort associated with the BDS Campaign or at the UN. Much will be revealed by how the Biden administration approaches Iran, particularly whether it attaches new conditions to the revival of Nuclear Program Agreement (JCPOA) of 2015 from which Trump withdrew. The suspensions of arms deals with Saudi Arabia and the UAE are welcome signs that Biden’s foreign policy might be directed at achieving some demilitarization of the Middle East with special emphasis placed on ending chaos and strife in Yemen, Syria, and Libya, as well as promoting stability in Iraq and Lebanon. It seems likely that Israel will continue to exert a strong influence on U.S. policy toward the region, and the Biden leadership has promised to consult with Israel before making any new policy moves in the region. At the same time, it is my impression is that Biden’s priorities will be overwhelmingly domestic (COVID, economic recovery), and that he will try hard to avoid the distractions of adopting controversial foreign policy positions. Even more troublesome than the Middle East, is an escalation of tensions with China and Russia, which definitely seems to be on the radar screen of Antony Blinkon and other top foreign policy advisors.

Q 3: Former US President Trump announced a “peace plan” which is widely known as “the deal of the century.” Do you think it was a realistic initiative?

The Trump plan was essentially a demand that Palestinians agree to political surrender with respect to their struggle for basis rights in exchange for economic assistance in improving the quality of their daily lives. In the post-colonial age of robust nationalism to expect a people to accept subordination in their own homeland and

The renunciation of their inalienable right of self-determination is unrealistic, besides being contrary to the spirit of the post-colonial ethos. Such a one-sided proposal as put forward by the Trump presidency was nothing other than a tactic of geopolitical bullying, and should not be confused with genuine peacemaking.

Q 4: How would you comment on the position of international community regarding Palestine conflict?

The international community seems stuck in a time warp by its continued adherence to the totally discredited Oslo diplomacy, which was premised on a two-state solution. As B’Tselem Report clearly demonstrates, the one-state reality has become the only foundation of any future meaningful peace process, posing a challenge of how to arrange for future governance on a basis of true ethnic equality. Until this happens, UN and internationalist initiatives will be irrelevant. It is my belief that what hope exists for a just solution will arise from Palestinian resistance and global solidarity initiatives exerting sufficient pressure on the Israeli leadership so as to cause a recalculation of national interests. It is useful to remember that it was this combination of developments that explains the abrupt and unexpected collapse of the South African apartheid regime.

Q 5: Though UN has commented on the illegality of the settlements that Israel continues to develop on the occupied Palestinian territories, the organization still falls short in bringing about a peaceful solution. What should the UN do to ensure security, accountability, human rights and dignity for the Palestinian people?

The UN did pass a strong anti-settlements resolution at the end of 2016 by a 14-0 vote in the Security Council, with the U.S. abstaining, during the last days of the Obama presidency. [SC RES 2334, 23 Dec 2016] It was the strongest reassertion of UN authority in recent years, yet it led nowhere when it came to implementation. As Israel has repeatedly demonstrated over the course of its history, it will not be swayed by international law or UN directives, and will experience no adverse consequences for such defiance. It has now provocatively challenged the Biden presidency by approving 3,000 new permits for unlawful settlement construction, many of the approved new structures are situated deep in the West Bank, signaling Israel’s continuing establishment of unlawful facts on the ground to reinforce its refusal even to consider the negotiated emergence of a viable Palestinian state. It is important that the UN agenda continue to document Israeli wrongdoing as this will encourage and legitimize civil society activism. It is only Palestinian resistance from within and global solidarity from without that can have any prospect of achieving Palestinian rights and a peaceful future for both peoples.